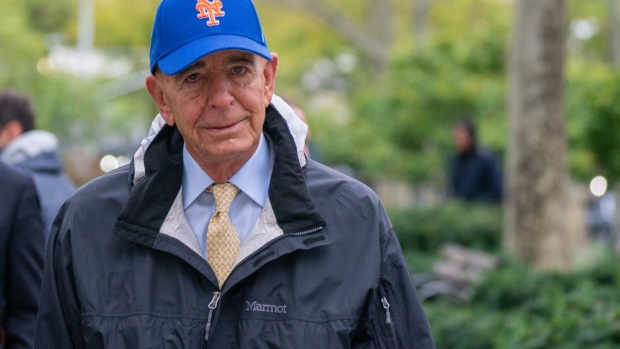 Tom Barrack Jr., founder of Colony Capital Inc., right, arrives at criminal court in New York, U.S., on Monday, July 26, 2021. Barrack and U.S. prosecutors have reached agreement on a bail package that will allow him to be freed ahead of a trial on charges that he illegally lobbied the government on behalf of the United Arab Emirates, according to people familiar with the case. Photographer: Mark Kauzlarich/Bloomberg , Bloomberg

(Bloomberg) -- A United Arab Emirates official said Tom Barrack would be a “great envoy for us” in a December 2016 chat expressing hopes that the longtime friend of President Donald Trump might even become US secretary of state.

The text exchange was shown Tuesday to a federal jury in Brooklyn, New York, where Barrack is on trial for allegedly acting as an unregistered agent for the UAE.

“Tom will be the envoy for sure,” Emirati businessman Rashid al Malik Alshahhi wrote to a UAE government official identified as Khalifa Al Ghafli. “He might be Sec of St in short time.”

“He will be a great envoy for us,” Al Ghafli replied. Al Malik, Barrack’s alleged go-between with UAE officials, was also charged in the case but remains at large.

Barrack, founder of Colony Capital LLC and a longtime Trump friend, has denied acting on behalf of the UAE, saying any advice he gave the administration was based on his own experience doing business in the Middle East. Though he expressed interest in becoming an ambassador under Trump, Barrack never joined the administration.

Defense lawyers on Tuesday showed jurors a government form Barrack filled out for consideration for an ambassadorship. He disclosed key meetings with UAE officials in the form, which his lawyers claim show that he had nothing to hide.

Former US Secretary of State Rex Tillerson took the stand Monday as a prosecution witness. The onetime Exxon Mobil Corp. chief executive officer described a seemingly chaotic foreign policy process in the early days of the Trump administration, saying he wasn’t aware of any contacts Barrack, as well as Jared Kushner, was having with foreign leaders.