There's going to be a crunch for production of batteries for EV's: CEO

Some Uber and Lyft drivers are finding that renting or buying a Tesla, the luxury electric car, is a more profitable option now amid soaring gas prices that have upended the economics of gig work.

Last summer, Heidi Barnes, 34, thought about upgrading her beloved 2009 Toyota Camry, which she nicknamed “The Beast,” for a sleek Tesla Inc. Model 3 sedan. The Lancaster, California-based driver never imagined that the high-end vehicle would become less of a splurge and more like a last resort until the average price for a gallon of gas in the US surpassed US$4 for the first time in March. Almost overnight, a full tank went from costing Barnes roughly US$60 to a day to more than US$100, making it harder to make a decent profit from ferrying passengers around Los Angeles County. “It was a huge push to get in a Tesla sooner rather than later,” Barnes said.

Barnes opted to rent a standard Tesla Model 3 for a month through Hertz, which has a deal with Uber Technologies Inc. offering drivers a weekly rate of US$344 that includes insurance, basic maintenance, and unlimited miles. Even after accounting for the cost to charge the car, Barnes was paying roughly US$450 a week for “the car of her dreams,” less than the nearly US$600 required to fuel her Camry. In her first week, Barnes’ earnings covered the cost of the rental for the month.

Her new ride is also a hit with passengers. “They’re a lot more generous,” Barnes said. “Usually I’m lucky to get US$1 to US$3 tips but it’s now US$10 or US$15, sometimes consecutively.” In total, she netted over US$2,600 during her 25-day rental, more than double the US$800 to US$1,000 she typically made from driving the “Beast,” according to screenshots of earnings she provided to Bloomberg. 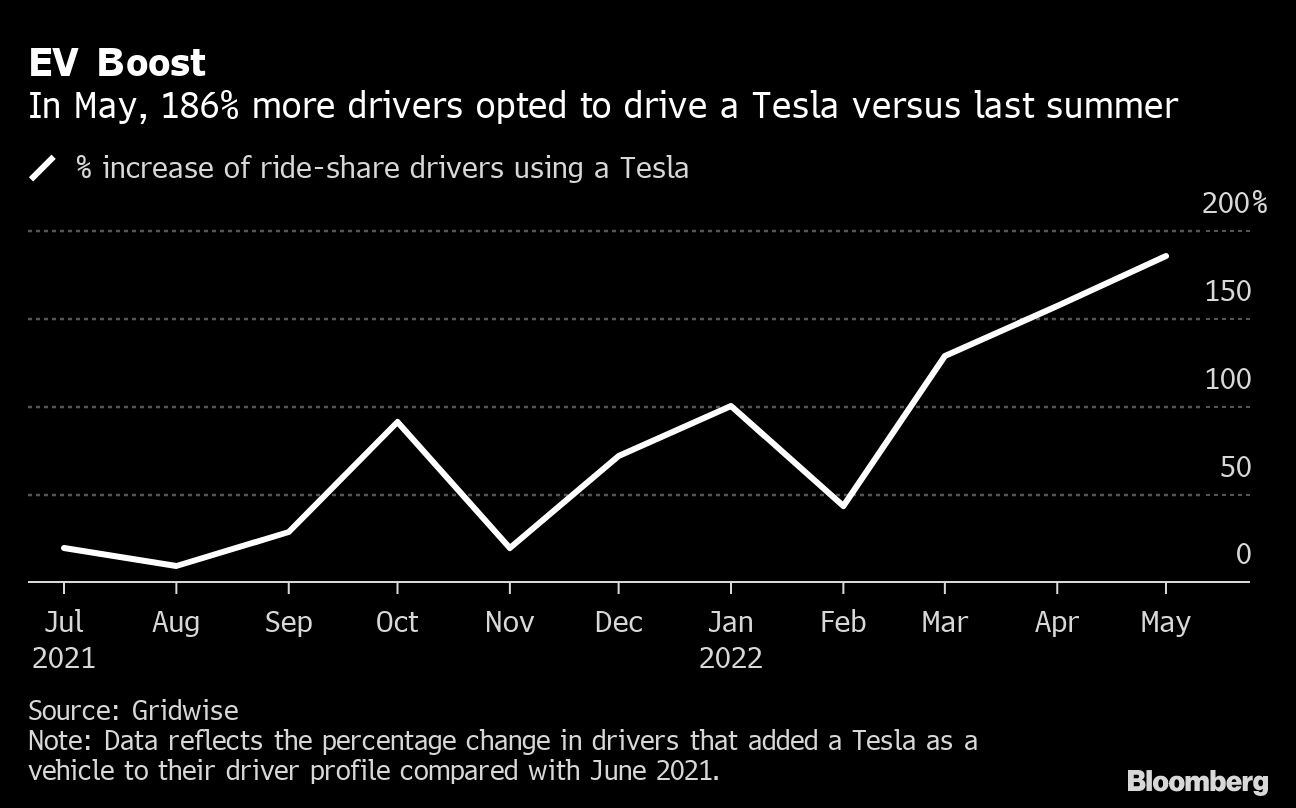 This month, the national average for a gallon of gas topped US$5, an all-time high since the American Automobile Association began collecting pricing data in 2000.  As prices continue to climb, the difference between gasoline-powered cars versus electric is only becoming more stark.

For drivers who have seen their take-home pay whittled down, the switch isn’t just skimming a few dollars from expenses, it’s a lucrative earnings opportunity. According to Gridwise, an app that helps gig workers manage their trips, the number of ride-share and delivery drivers who opted to hop behind the wheel of a Tesla jumped 186 per cent in May compared with last June.

The Tesla trend also comes at a time when Uber and Lyft Inc. are on the hook to show progress toward achieving their goal of switching entirely to EVs in Europe and North America by 2030.

Uber offers an additional US$1 per ride to drivers who switch to an EV — which can earn them up to US$4,000 a year under the company’s Green Future program. Last month the San Francisco-based company revamped its driver app with an “EV hub” that features a charging map and made rides in EVs a premium option for passengers. Lyft, meanwhile, offers no financial incentives for drivers to switch to EVs.

Since launching its partnership with Hertz in November, Uber has seen more than 15,000 drivers rent a Tesla. “Participation has been really compelling,” Adam Gromis, Uber’s public policy manager for sustainability, said in an interview. “Drivers are smart and they know how to maximize their take-home pay.” Uber has about 1 million Uber drivers in the US, according to The Rideshare Guy, a website dedicated to the ride-share industry.

But reaching those EV goals in the US in less than a decade won’t be easy. In 2021, fewer than 1 per cent of ride-hailing vehicles in the country were electric, according to clean-energy research firm BloombergNEF. Uber is doing better in Europe, where government incentives also help spur the switch to EVs.

Green Goals | The vast majority of ride-share vehicles in the US are still gas-powered
One big reason behind the reticence is that the cost of a battery-powered car is still too high relative to a driver’s wages. On average, an electric car now costs US$61,000. Another hurdle is the availability of charging stations. Barnes mostly drives in Los Angeles, where Tesla Inc. superchargers are plentiful, but often crowded. Without a wait, the process takes about 45 minutes, but when every dock is taken, it can become a much longer ordeal, Barnes said. “In this job, every minute you’re not on the road picking up a passenger is money you’re leaving on the table.”

Renting is a low-risk option for Uber and Lyft drivers like Barnes who can’t afford to purchase one outright, especially after Tesla raised prices by as much as US$6,000 per car.

But for other drivers like Luis Martinez, 34, taking out a hefty loan is a risk worth taking instead of waiting for gas prices to come down. Like Barnes, Martinez first started looking to replace his 2012 Toyota Camry Hybrid with an electric car at the beginning of March when gas prices spiked. He had his eyes set on a new Hyundai Ioniq 5, which, listed at roughly US$47,000, was in his price range. But at dealerships, the car was going for as much as US$62,000, well above the Manufacturer’s Suggested Retail Price and the resale market was even worse, Martinez said.

That’s when he settled on the Tesla Model 3 Long Range. “I was throwing US$800 at gas every month and I realized instead I could put that money towards a car I could actually own,” he said. With a US$58,000 price tag, Martinez took out a loan. In one week, his US$900 car payment is covered and he pockets about US$1,000 more in take-home pay.

Persistently high gas prices and resurgent demand for ride-hailing has created the ideal conditions for a Tesla — a car considered affordable mostly only for well-off buyers — to be within reach for Uber and Lyft drivers. But the math only makes sense if demand for rides remains elevated. In May, average transactions per customer at both Uber and Lyft increased 15 per cent compared with last year, according to Bloomberg Second Measure, and the summer travel season typically benefits ride-hailing.

Still, Martinez, who drives in Ventura, California, is acutely aware of the trade-off. “I’ve never taken a loan for that much before and it’s very scary. I’m more stressed because I know I have to drive a minimum to cover the car and doubt creeps in.” he said. Still, when he pulled the trigger on buying his Tesla, gas had just crossed US$5. Today, it’s north of US$6.40, according to AAA. “There’s a lot of anxiety but, for me, the math makes sense.”