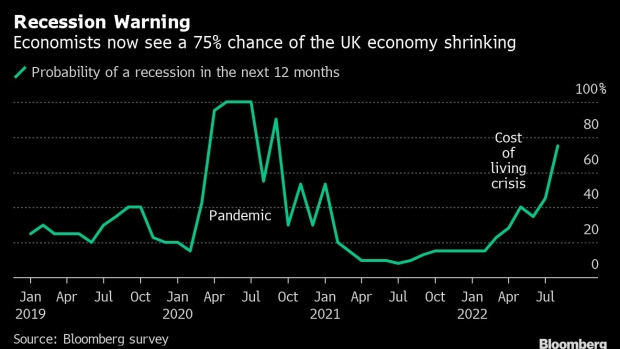 STOKE-ON-TRENT, UNITED KINGDOM - AUGUST 05: A hoarding covering a regeneration site is adorned with a the slogan 'We are levelling up Stoke-on-Trent" on August 05, 2022 in Stoke-on-Trent, United Kingdom. The city of Stoke-on-Trent was one of the fastest local economies to rebound from the last recession and the predicted latest recession will be a worry for many businesses and local families. Stoke is also seen by many as a litmus test for levelling up with the city councils prospectus called 'Powering Up Stoke-on-Trent'. The Bank of England raised interest rates by 0.5% yesterday to 1.75% and forecast that the UK was heading for a recession. The economy is forecast to shrink in the last three months of this year and keep shrinking until the end of 2023. (Photo by Christopher Furlong/Getty Images) , Photographer: Christopher Furlong/Getty Images Europe

Economists are growing increasingly pessimistic about the UK, with the risk of a recession now seen as far more likely than not and interest rates expected to go higher than previously thought.

That’s according to the latest Bloomberg survey, which was carried out in the days after the Bank of England unleashed its biggest interest-rate hike in 27 years and warned of almost two years without a quarter of growth because of the cost-of-living crisis.

The half-point rate rise announced on Aug. 4 is expected to be followed by a similar increase in September as policy makers battle double-digit inflation, according to the median forecast in the survey. A subsequent quarter-point hike in November will take the BOE benchmark to 2.5%, above the previously forecast peak of 2%.

Unlike the BOE, economists see the UK avoiding a recession, with a small contraction in the fourth quarter followed by stagnation in the early months of 2023 and then a resumption of modest growth. However, the risks of a slump are growing.

The probability of a recession is now estimated at 75%, up sharply from 44% in early July and higher than any time since September 2020 when the pandemic was raging. The Bloomberg survey was carried out between Aug. 5 and Aug. 11.