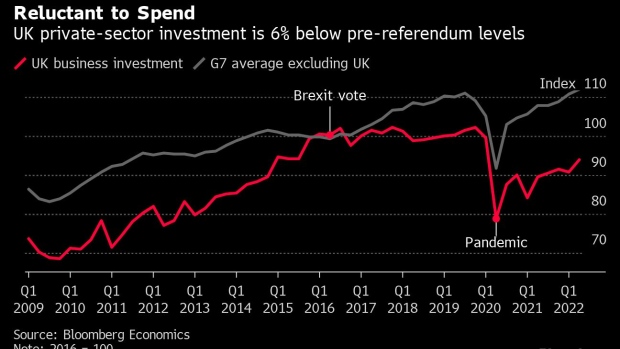 (Bloomberg) -- Four new sound stages are sprouting up in fields about a half hour’s drive west of London’s Heathrow Airport, a rare bright spot for Britain’s ailing economy.

The expansion at Shinfield Studios, reported to be hosting a new Walt Disney Co. “Star Wars” production, is set to draw in investment of £600 million ($726 million) a year for film and TV work once the construction is complete at the end of 2023.

It’s part of a broader boom across Britain’s film industry that provides both a lesson and a warning for Prime Minister Rishi Sunak’s government on how to stimulate growth. Buoyed by carefully-targeted tax credits rolled out in 2007 and extended in 2013, the production ecosystem is growing at a record rate, feeding a surge in demand for content. The industry is expanding so quickly it’s struggling to hire enough workers.

“Given the challenges faced by businesses in the wake of the pandemic, this level of industry growth is remarkable and one of the great British success stories,” said Shevaun Haviland, director general of the British Chambers of Commerce.

In all, spending on UK film and high-end television productions hit a record £5.72 billion ($6.9 billion) in the year through June, up 3% from the previous year, according to the British Film Institute. Inward investment — from foreign production companies working in the UK — accounted for 83% of the total. It’s gaining on the $66 billion expense that the US film industry racks up each year, according to Census Bureau data.

The creative industries are key for Britain. Film crews have mushroomed and with funding from streaming giants such as Amazon.com Inc., Apple Inc. and Netflix Inc. UK high-end TV production grew at an average annual rate of 19% since 2013.

“It’s been happening quite quietly over the past five to eight years,” said Nick Smith, the co-managing director of Shinfield Studios, who decided to build the site in Reading, west of London. “You could see the likes of Netflix, Apple and Amazon coming along, but all the studios were full. I thought, ‘where are all these people going to go now?’”

The industry that created blockbusters including Tom Cruise’s “Mission Impossible” series and Johnny Depp’s “Pirates of the Caribbean” is set to add almost 2.7 million square feet of sound stage space by 2025, according to research by Nordicity and Saffery Champness LLP. That’s the equivalent space occupied by five stadiums the size of Wembley in north London.

Those facilities will have the potential to draw in more than £2 billion a year in film and TV production. It’s an important source of inward investment at a time when Britain’s departure from the European Union raised concerns about declining trade and exports.

That success wasn’t always certain. Britain’s film industry hit a lull around the turn of the century, with competition from other cities across Europe luring away productions. Gordon Brown, who served as prime minister from 2007 to 2010, first gave the industry a boost with a tax credit for film makers. That was expanded six years later under David Cameron, who allowed television and streaming companies to qualify.

The credit grants a 25% discount on every £1 spent on production activities in the UK and has helped make the nation a magnet for big-budget media companies.

Today, the film industry’s work is an increasingly rare example of where the government listened to what companies need to invest and provided incentives that tipped the balance in the UK’s favor.

Across the UK, from the City of London’s financial district, to music producers and the arts, executives are complaining that Sunak’s government has no strategy to foster growth in the economy or in their industries. Business investment trailed the rest of the Group of Seven nations since the UK decided to leave the European Union in 2016. The Confederation of British Industry has warned that the UK is headed into a long recession without any strategy for recovery.

“The country does not have a plan for growth,” said Tony Danker, director general of the CBI, Britain’s biggest business lobby group. “Government needs to play a role in changing that.”

For now, film studios are building so fast their primary concern is a shortage of workers with the skills to support productions — a problem exacerbated by Brexit.

Pinewood Studios in Slough, where classics including “Fiddler on the Roof” and “Aliens” were shot, has doubled in size in recent years and its the UK’s largest production spot. Others such as Bovingdon in south east England, Garden Studios in London, and Leeds Versa Studios in Yorkshire also undergoing new development.

At least 122,000 people work in the industry, and continued growth will require up to 20,770 more by 2025, according to the BFI. The cost to train those individuals is likely to reach as much as £104.3 million annually.

“Content is now being made at a speed like we’ve never seen before,” said Chris Hees producer and founder of production company, Bridge Way Ltd. “We just can’t keep up with the skill demand.”