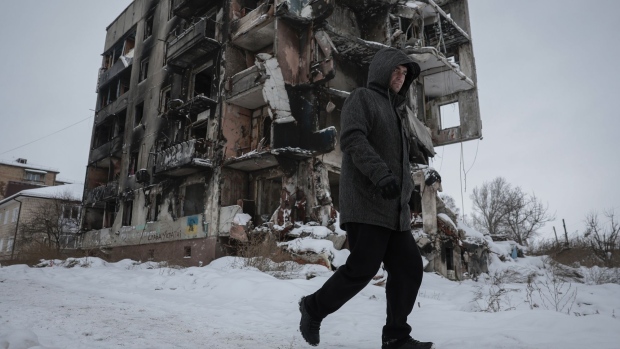 (Bloomberg) -- The European Union announced a ninth package of sanctions against Russia, including restrictions on access to drones, chemicals and technologies used for military purposes.

The measures, which need the backing of all EU member states, were made public hours after President Vladimir Putin warned that the threat of nuclear war in the world is rising, and reiterated that Russia will defend itself “with all means necessary.”

Ukrainian President Volodymyr Zelenskiy was named “Person of the Year” by Time magazine.

Commerce Secretary Gina Raimondo, Director of National Intelligence Avril Haines and Secretary of State Antony Blinken were also due to join the briefing.

EU Commission President Ursula von der Leyen announced the bloc’s latest set of penalties aimed at Moscow for its war on Ukraine, saying the EU is “stepping up the pressure on Russia.”

European Commission Executive Vice President Valdis Dombrovkis, responding to Putin’s comments on the risk of nuclear war, said the EU will not give in to Russian blackmail and manipulation. He pledged to continue to provide support to Ukraine including providing 18 billion euros ($18.9 billion) of financial assistance for the coming year.

“Ukraine needs our support and we are going to provide this support,” he said in an interview with Bloomberg TV. “We are aiming for the first disbursement in January and we are sticking with this.”

The Russian president told a Kremlin human-rights panel that the country’s nuclear arsenal is a “deterrent factor” in conflicts, and stopped short of pledging not to be the first to use them.

Warning that the threat of nuclear war in the world is rising, Putin reiterated that Russia will defend itself and its allies “with all the means we have if necessary,” and blamed the US and its allies for making nuclear threats.

“We won’t brandish them like a razor, running around the world, but we of course proceed from the fact they are there,” he said of Russia’s arsenal. “This is naturally a deterrent factor, not provoking expansion of conflicts but a deterrent and I hope everyone understands this.”

Putin Says No Need for Further Mobilization for Now (3:51 p.m.)

The Russian leader said there’s “no need” now to mobilize more reservists, with about half the 300,000 called up in September still in training, providing a “combat reserve.”

The last mobilization triggered a massive exodus of Russians from the country and shook confidence in the war effort, leading Kremlin officials to reiterate that there are currently no plans to repeat the move.

Putin also said achieving results from his invasion may be “a prolonged process.” But he cited the annexation of occupied territories as “a significant result for Russia.”

Time magazine called this year’s choice of President Zelenskiy “the most clear-cut in memory” as the Ukrainian leader had galvanized the world in a way unseen in decades.

Each year, the magazine chooses a person who has influenced the world the most for good or for ill. In 2007, Putin took the accolade.

Swedish Foreign Minister Tobias Billstrom, whose country seeks to join NATO alongside Finland, pushed back against calls for Kyiv to negotiate with Moscow, saying Russia must not succeed.

“Messages from partners that Ukraine needs to engage in negotiations risk reinforcing Mr. Putin’s conviction that time is on his side and therefore prolong the war,” Billstrom said at the Atlantic Council on Wednesday. “Whether to negotiate with Russia or not — and if so, about what — is for Kyiv to decide.”

A total of 529 ships with 13.2 million tons of agricultural products have left the Black Sea ports of Odesa, Pivdennyi and Chornomorsk since the start of “grain corridor” initiative in August, the Infrastructure Ministry said.

Currently, 20 vessels are in port being loaded with Ukrainian products, the ministry said.

Russian Damage to Ukrainian Infrastructure Worth Over $70B: Ministry (12:30 p.m.)

The amount of damage caused by Russian strikes on Ukrainian infrastructure targets and civilian residences, since the start of the invasion, has already exceeded $70 billion, deputy infrastructure minister Yuriy Vaskov said at an EBRD online conference Wednesday. That includes $30 billion in the transport sector and $39 billion in housing losses, he said.

“We have already started the restoration of roads, bridges, railway infrastructure, built 12 module towns for those who lost their houses,” Vaskov said.

Ukraine continues to experience a significant power deficit, national grid operator Urkenergo said on Telegram. The most difficult situation is in the east of the country, where temperatures fell to -17C after Russian forces made repeated attacks on several energy facilities Tuesday evening.

Putin has discussed “attempts of some western nations to introduce anti-market limits on the price of Russian crude” in a phone call with the UAE President Sheikh Mohammed bin Zayed Al Nahyan, according to a statement from the Kremlin.

Russia is looking for ways to counter the price-cap and the decision will be taken by the end of the year, Deputy Prime Minister Alexander Novak said earlier this week. One of the potential solutions is setting a ‘price floor’ for international sales of Russian oil barrels, according to two officials familiar with the discussions.

NATO Chief on Drone Strikes: Ukraine Has Right to Defend Itself (10:06 a.m.)

Asked about recent strikes inside Russia, NATO Secretary General Jens Stoltenberg said Ukraine has the right to defend itself against attacks by Russia on its cities and critical infrastructure.

The alliance chief said the conditions are currently not ripe for peace negotiations because Russia has showed “no sign of engaging in negotiations which are respecting the sovereignty and territorial integrity of Ukraine,” he told the Financial Times in an interview. He said that Ukraine has concerns Russia could use a pause in fighting to regroup and launch a bigger offensive later on, given that Ukraine currently has the momentum.