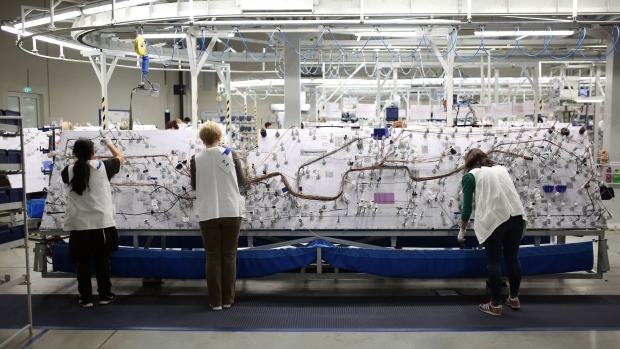 (Bloomberg) -- The war in Ukraine could cost Europe’s automakers production of hundreds of thousands of vehicles because the country is a key source of wire harnesses that power car electrical systems.

The shutdown of wire-harness plants in Ukraine may lower output by as much as 700,000 vehicles in the first and second quarters, Colin Langan, an auto analyst at Wells Fargo & Co., said in a report. Volkswagen AG and BMW AG have already idled factories due to the supply disruption, while Mercedes-Benz AG has reduced output at a German factory.

German auto supplier Leoni AG made wire harnesses at two factories in western Ukraine employing about 7,000 people prior to Russia’s invasion. The Bavaria-based company lowered forecasts on Monday for annual sales and earnings, warning it won’t be able to make up for lost production from the facilities this year. While the parts maker plans to double output at some locations outside Ukraine, those adjustments could take at least two to three months.

If VW is unable to get supply of wire harnesses for more than three or four weeks, the carmaker will have to revise its outlook, Chief Executive Officer Herbert Diess said Tuesday. The company has redirected semiconductors for 50,000 to 100,000 vehicles to assembly plants in China and the U.S. because of the disruptions to its European supply chain.

Ukraine has 17 wire-harness facilities, ranking behind only Romania and Morocco among countries with lower-cost locations, according to Wells Fargo’s Langan. He estimates the supply issue could affect 10% to 15% of European auto production and sees potential for output to be recouped within the year.