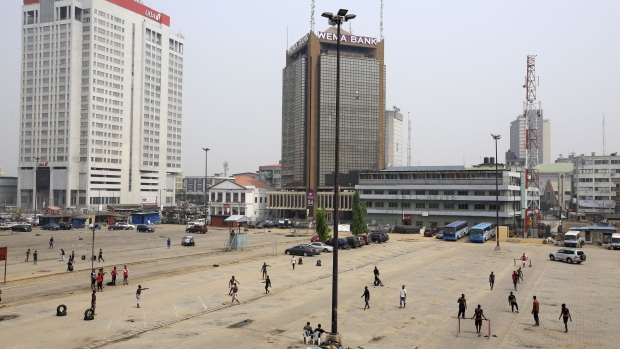 People play soccer in a car park in the business district of Lagos, Nigeria, on Saturday, Feb. 16, 2019. A last-minute delay of Nigeria’s general elections by a week has thrown Africa’s biggest democracy into disarray and carries dangers for both President Muhammadu Buhari and his main opponent, Atiku Abubakar. , Bloomberg

Banks raised their loan-to-deposit ratio to 64% in the third quarter, one percentage point shy of the minimum target imposed by the central bank, according to Bloomberg calculations using quarterly banking data released by the National Statistics Bureau. The monetary authority gave banks until the end of the year to meet the threshold or hand over half of the shortfall to the central bank without earning interest.

The statistics bureau didn’t provide a breakdown of lending by individual banks.

In October, the central bank slapped 500 billion naira ($1.4 billion) in sanctions on 12 lenders including Citigroup Inc. for failing to meet an original lending target of 60% of deposits. Measures to bolster credit are at the center of President Muhammadu Buhari’s plan to rekindle sluggish growth, though they’ve raised concerns about the future health of the banking industry, even as credit defaults dwindle.

Gross lending rose 7.3% in the third quarter from the previous three-month period, the biggest quarterly jump since early 2017, when the country was emerging from its first annual economic contraction in 25 years.

While deposits have dropped slightly since July, when the central bank unveiled the lending target, non-performing loans fell to the level lowest in four years in the third quarter, the data shows.

To contact the editors responsible for this story: Anthony Osae-Brown at aosaebrown2@bloomberg.net, Paul Richardson, Vernon Wessels