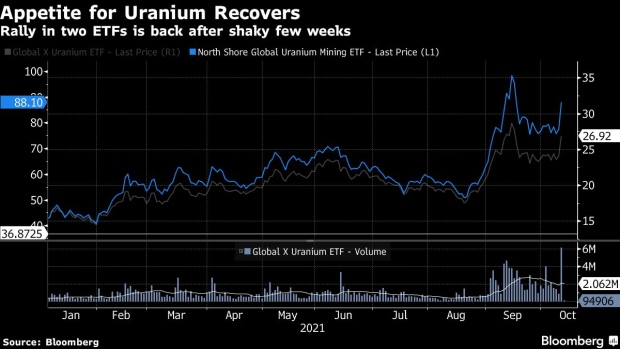 (Bloomberg) -- The rally for two exchange-traded funds focused on uranium is surging back, delivering fresh gains to investors who’ve poured more than $1 billion into them this year in a bet on nuclear power’s resurgence.

The jumps end what had been a rocky start to October for both ETFs, which had pulled back from a steep rally in the face of rising fossil-fuel prices. Those gains tracked the price of Uranium higher as investors gave a fresh look to the radioactive metal as worsening power shortages increase the allure of nuclear power as an alternative.

That view has been buttressed by some recent announcements. On Tuesday, the French government said it will help a state-controlled utility company develop so-called small modular nuclear reactors by 2030, a move President Emmanuel Macron signaled as key to reducing global carbon emissions. Japan’s new prime minister said that the nation should replace aging nuclear power plants with such module reactors.

ETFs that track uranium are some of the best performers of the last two years, reversing a downturn that came when investors shunned the commodity in the wake of Japan’s Fukushima nuclear disaster.

“There is a growing realization among people in the energy industry and those investing in it that the baseload (always available) feature of nuclear power -- as well as the fact it delivers carbon free electricity -- makes it an important component of the world’s carbon neutral goals,” said Michael Alkin, founder of Sachem Cove Special Opportunity Fund, which invests in uranium.