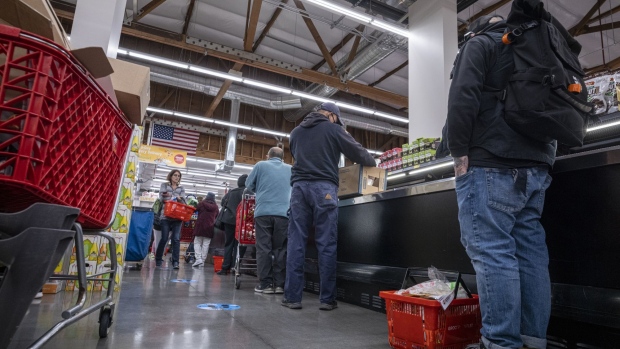 Shoppers wait in line to checkout inside a grocery store in San Francisco, California, U.S., on Monday, May 2, 2022. U.S. inflation-adjusted consumer spending rose in March despite intense price pressures, indicating households still have solid appetites and wherewithal for shopping. , Bloomberg

(Bloomberg) -- US consumer sentiment deteriorated further in late May to a fresh decade low as escalating concerns over inflation dimmed the outlook for the economy.

The University of Michigan’s final May sentiment index decreased to 58.4 from a preliminary reading of 59.1, data released Friday showed. In April, the gauge stood at 65.2.

Households turned especially pessimistic in their short- and long-term outlooks for the economy. A gauge of current conditions fell to a 13-year low of 63.3, while a measure of future expectations dropped to 55.2.

“This recent drop was largely driven by continued negative views on current buying conditions for houses and durables, as well as consumers’ future outlook for the economy, primarily due to concerns over inflation,” Joanne Hsu, director of the survey, said in a statement.

The university’s index of buying conditions for durable goods dropped in May to the lowest level on record.

Inflation is outpacing wage gains, stressing Americans’ finances and leaving less discretionary income after covering for higher costs of food and gas. And while workers have enjoyed a strong job market, there are signs that pay increases have peaked.

A separate report earlier Friday showed inflation-adjusted consumer spending rose in April by the most in three months, indicating households were holding up in the face of persistent price pressures by dipping into savings.

President Joe Biden and fellow Democrats are desperate to bring inflation down ahead of midterm elections later this year, and so far Americans are frustrated with their efforts. Opinions on government policies to fight inflation and unemployment are at the lowest since 2014, the university’s report showed.