The record-breaking rise in used-car prices is probably coming to an end -- and with it a key driver of the recent spike in U.S. inflation.

The bellwether of the industry -- the wholesale market where dealers buy and sell in bulk -- has already topped out and prices of individual secondhand cars should follow in a matter of weeks, said Zo Rahim, industry analyst at Cox Automotive. Cox owns Manheim, the biggest U.S. auction house selling millions of vehicles every year. 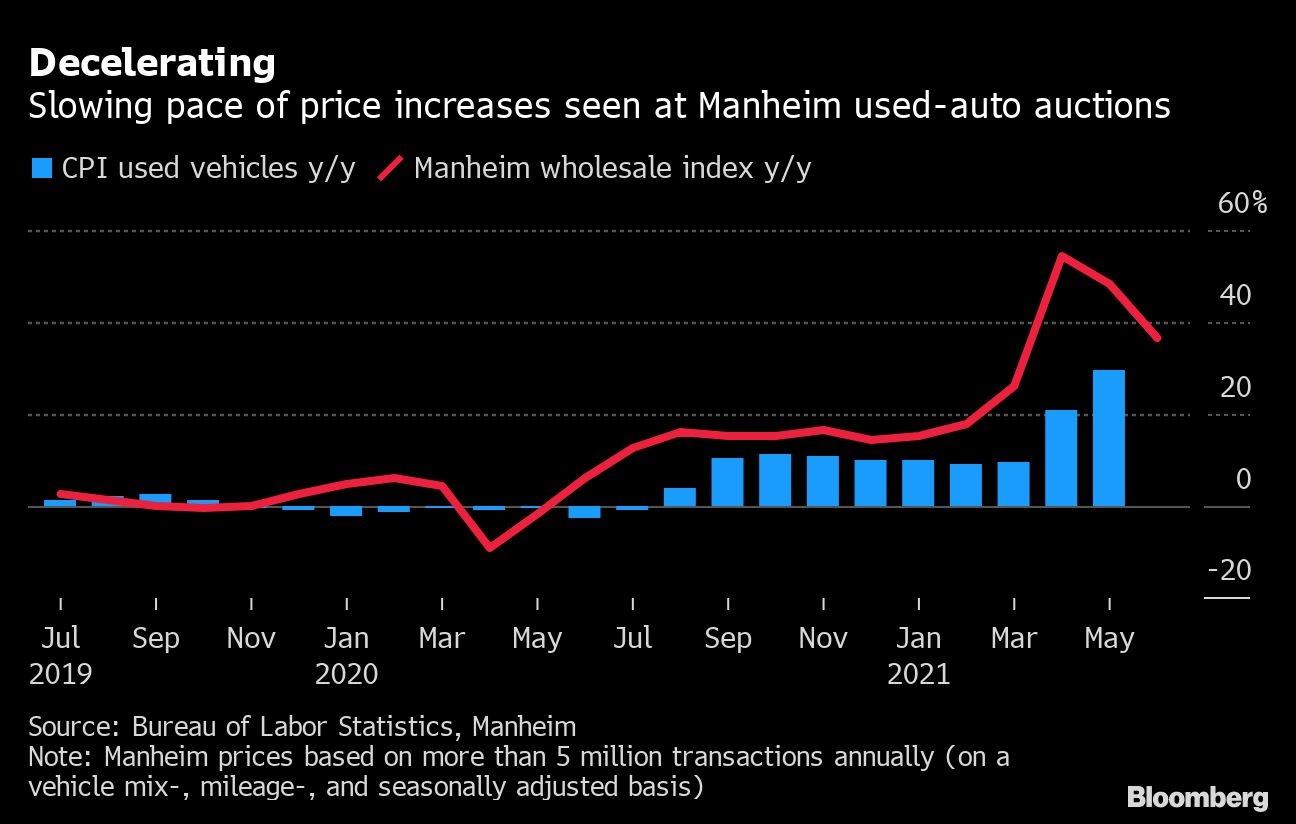 Soaring prices for secondhand vehicles have helped push U.S. inflation to the highest in more than a decade. The cost of used cars and trucks climbed 10 per cent in April, and another 7.3 per cent in May when they were responsible for one-third of the overall rise in consumer prices.

All kinds of pandemic-driven shifts in supply and demand have contributed to the run-up. But there are signs that it may be peaking -- bolstering the Federal Reserve’s argument that the spike in inflation as the economy reopens will turn out to be largely transitory.

“Wholesale prices as of right now are at their peak and should start to come down,” Rahim said. “We are seeing a decelerating pace of price increases in the first two weeks of June, compared to what has been just an absolute surge.”

Prices for individual vehicles typically track the wholesale market, but with a lag, he said. That likely means “a few more weeks of retail prices increasing, before they start to follow suit.”

Manheim’s wholesale index of used-vehicle value was 36 per cent higher than a year earlier as of mid-June –- down from an annual rate above 50 per cent in April. One effect of higher prices has been to push the average age of vehicles on U.S. roads up to a record 12.1 years in January.

The volatile U.S. auto market was cited by Fed Chair Jerome Powell in a House hearing on Tuesday to help explain the outlook for consumer prices.

“A pretty substantial part, or perhaps all of the overshoot in inflation comes from categories that are directly affected by the re-opening of the economy, such as used cars and trucks,” Powell said. “Those are things that we would look to stop going up, and ultimately to start to decline.”

Car dealers expect the strong demand to persist. CarMax Inc., which sells about 1.2 million vehicles a year from 220 locations, says it’s hiring an additional 5,000 auto professionals this summer, and will offer training programs to entice workers from other industries.

The jump in used-car prices has a variety of causes. Some are unique to the auto industry, and others are playing out across the economy. Some result from pandemic trends that are already fading, and others from shifts in behavior that could take longer to return to pre-COVID norms –- if they ever do.

Following is an overview of some of them.

U.S. household incomes actually rose on aggregate during the pandemic, as government aid and expanded benefits more than offset lost wages. And since lockdowns limited spending opportunities, much more of the money got stashed away than usual. 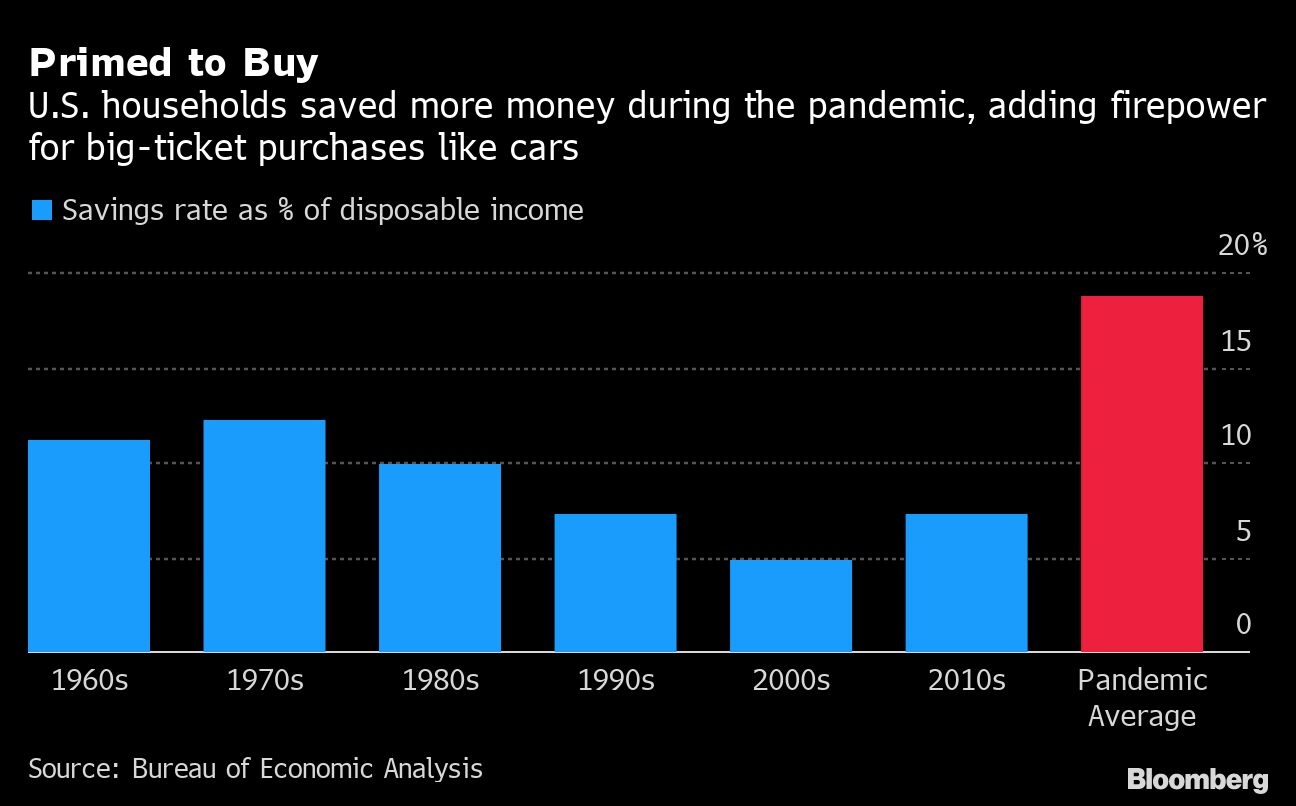 “Consumers are sitting on savings that they have accumulated over the last 12 months, and are leveraging that money to buy durable goods such as cars,” said Rahim, the Cox Automotive analyst.

…And so is supply

Auto factories all over the world shut down at the worst points of the pandemic. As they tried to crank production back up, a new problem emerged: shortages of semiconductors, key components for in-car touchscreens and other functions like power steering. Global output of new vehicles in the first quarter was down more than 2 million units from 2019.

That’s had a knock-on impact on the used-car market in the U.S. With a squeeze on the availability of new vehicles, many buyers turned to secondhand ones instead.

Among those buyers, rental companies played a key role. They usually replenish their fleets with new cars. But this year, after selling hundreds of thousands of cars early in the pandemic as travel demand slumped, they’ve been turning to secondhand ones instead.

Companies like Hertz Global Holdings Inc. and Enterprise Holdings Inc. say they’ve been expanding their fleets by buying used cars where they can find suitable ones -- contributing to the surge in demand, where they’d normally be adding to supply by selling their older vehicles.

…And so did consumers

As well as having more savings to spend on buying a car, many Americans have also soured on other kinds of transportation during the pandemic -- making cars even more essential to millions of families.

All forms of travel were sharply curtailed in the first months of the U.S. pandemic, but car usage never declined as much as planes or public transit -- and it’s come much closer to regaining pre-COVID levels. 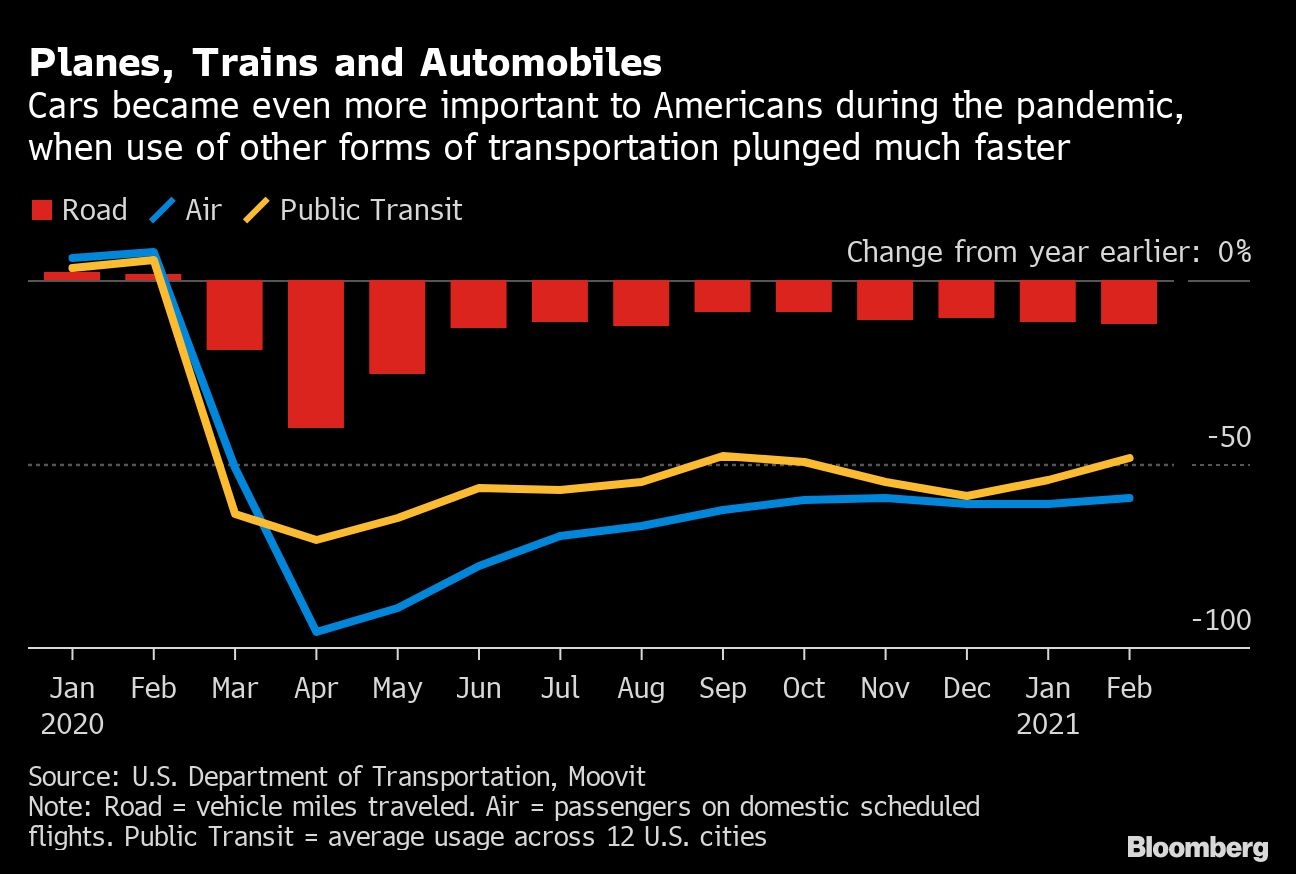