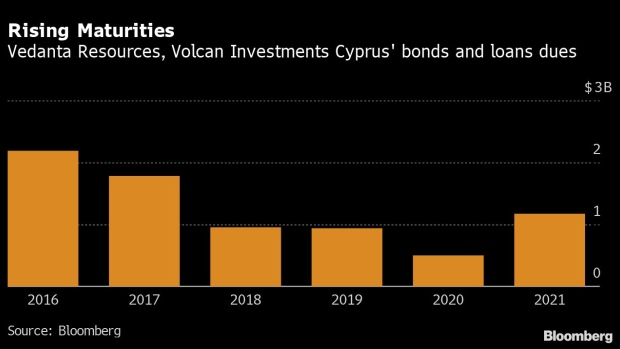 Signage for Vedanta Resources Ltd. is displayed at the company's office building in Mumbai, India, on Thursday, March 6, 2020. The world’s most expansive lockdown to contain the coronavirus could slow the pace of distressed dealmaking in India, according to Vedanta Head of Mergers and Acquisitions Aarti Raghavan. Photographer: Kanishka Sonthalia/Bloomberg , Bloomberg

Vedanta Ltd. holding companies Vedanta Resources Ltd. and Volcan Investments Cyprus Ltd. must repay a combined $1.17 billion next year. That’s the most since 2017, according to data compiled by Bloomberg.

Investors’ focus has been riveted on how Vedanta Resources will deal with its debt after opposition from minority shareholders derailed a delisting of its Indian unit Vedanta Ltd. two weeks ago. The privatization plan had intended to give the parent greater access to profits generated by operating companies and allay concerns about the debt load. Its flop adds to broader strains after the pandemic dragged down demand for commodities.

Progress for the company in refinancing debt will be important over the next couple of quarters, S&P Global Ratings analyst Neel Gopalakrishnan said Thursday. Vedanta Resources, which has a B- junk rating at S&P, has sufficient cash from subsidiaries to meet the debt due in the period, but if there are no significant developments “it’s likely that there would be renewed pressure on the rating,” he said.

Debt maturities for the Vedanta group including the parent entity over the next 12 months are around $2 billion, a Vedanta spokesman said, referring to the period from October 2020 to October 2021. “The group operations continue at near capacity even in the generally impacted global supply chains and produces significant free cash flows post capex needs,” he said. The company declined to state the amount of debt maturing in the calendar year 2021.

Investors showed more optimism after Tuesday, when Hindustan Zinc, which is 65%-owned by Vedanta Ltd., announced the interim dividend payout. Vedanta Ltd. in turn approved a dividend amounting to 35 billion rupees, according to an exchange filing Saturday.

Vedanta Resources’ dollar bonds due next year rallied about 10 cents last week, the most since June, to about 92 cents. Shares in Vedanta Ltd. also surged.

But despite the rebound, some of the group’s debt securities are still at strained levels. Vedanta Resources’ notes due in 2022, for example, are at about 77 cents on the dollar even after last week’s rally.