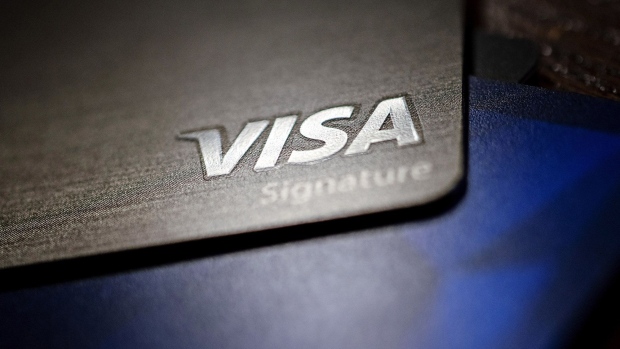 A Visa Inc. credit card is arranged for a photograph in Tiskilwa, Illinois, U.S., on Tuesday, Sept. 18, 2018. Visa and Mastercard agreed to pay as much as $6.2 billion to end a long-running price-fixing case brought by merchants over card fees, the largest-ever class action settlement of an antitrust case. Photographer: Daniel Acker/Bloomberg , Photographer: Daniel Acker/Bloomberg

Visa Inc. once again lowered its outlook for revenue growth in the fiscal second quarter, saying the coronavirus pandemic has led to a sharp decline in cardholders’ overseas spending.

The company now expects adjusted revenue growth by a percentage “in the high end of mid-single-digit” range for the three months through March, while expenses are likely to climb by a percentage in the “low end of high single digits.” The firm had already lowered its outlook once this month after seeing its business in Asia ravaged by the virus.

“As the virus has spread in the last few weeks, the impacts we saw in Asia in February are now occurring in the rest of the world, with a rapid deterioration of cross-border travel-related spending,” both online and in person, the company said Monday in a regulatory filing.

Visa and rival Mastercard Inc. have seen their stocks battered as governments around the world order consumers to stay at home and businesses to shut, prompting a slowdown in spending on the firms’ cards. Mastercard last week abandoned its outlook for full-year results.

This month, Visa cardholders’ spending has dropped 4 per cent in the U.S., while customers’ overseas spending has declined 19 per cent. Still, the firm has seen an overall 9 per cent increase in processed transactions between Jan. 1 and March 28.

“As countries have imposed social distancing, shelter-in-place or total lock-down orders, domestic spending, most notably in travel, restaurants, entertainment and fuel, has sharply declined,” the company said in the filing.

Visa shares were little changed in late trading after advancing 2.5 per cent to US$165.57 Monday. They’ve fallen 12 per cent this year.