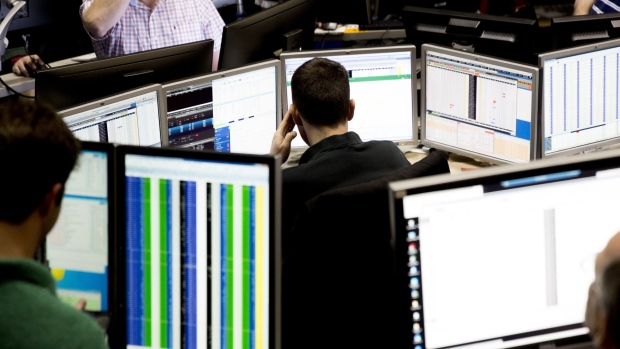 A trader looks over computer monitors as he works in the Cboe Volatility Index (VIX) pit on the floor of the Cboe Global Markets, Inc. exchange in Chicago, Illinois, U.S., on Wednesday, Feb. 14, 2018. Signs of an inflation pickup have roiled financial markets this month, and stock futures tumbled early Wednesday on concern the Fed would quicken its pace of tightening following data that showed faster-than-forecast inflation. Those fears receded as investors digested a separate report showing weak retail sales that raised questions about the economys strength. , Bloomberg

Wall Street’s volatility speculators are staring down one of the most confounding trading landscapes in years, even as bullish conviction pushes U.S. stocks back toward records.

On the one hand, equities are in their historically most volatile month, U.S. election risk remains elevated and the pandemic fallout continues. All of which suggest gains for investors betting on rockier markets, and risks for those shorting.

On the other, a manic season for corporate earnings is fading, historical swings on the S&P 500 are easing and technicals haven’t looked this inviting since 2012. With the Cboe Volatility Index, or VIX, sitting at its post-pandemic low, money managers may be tempted to bet on further tranquility. Yet there are few signs of strong conviction out there.

“This environment is, and has been, attractive for shorting equity volatility,” said Colton Loder, managing principal of Cohalo, an alternative investment firm. But, “there doesn’t appear to be a massive rush yet from what we can see,” added the Washington-based manager.

One indicator is that speculative short positions in VIX futures remain subdued, and have increased lately only in tandem with commercial longs. The metric doesn’t take into account those either selling options or betting in the over-the-counter market. But the lack of activity here could suggest traders are lacking strong conviction on shorting volatility even with one of the most promising market set-ups in years.

On the latter, take a look at one corner of the VIX landscape. Thanks in large part to heightened jitters around the U.S. presidential election, volatility futures several months out on the curve are trading at an outsize premium to near-term contracts, a condition known as contango.

The generic second-month VIX contract was 2.6 points higher than the front-month contract Monday -- near the largest gap in eight years. Since futures will converge to spot VIX at expiry, selling the contracts has typically delivered gains in a trade known as the rolldown. That’s especially when the curve has looked this upward sloping. 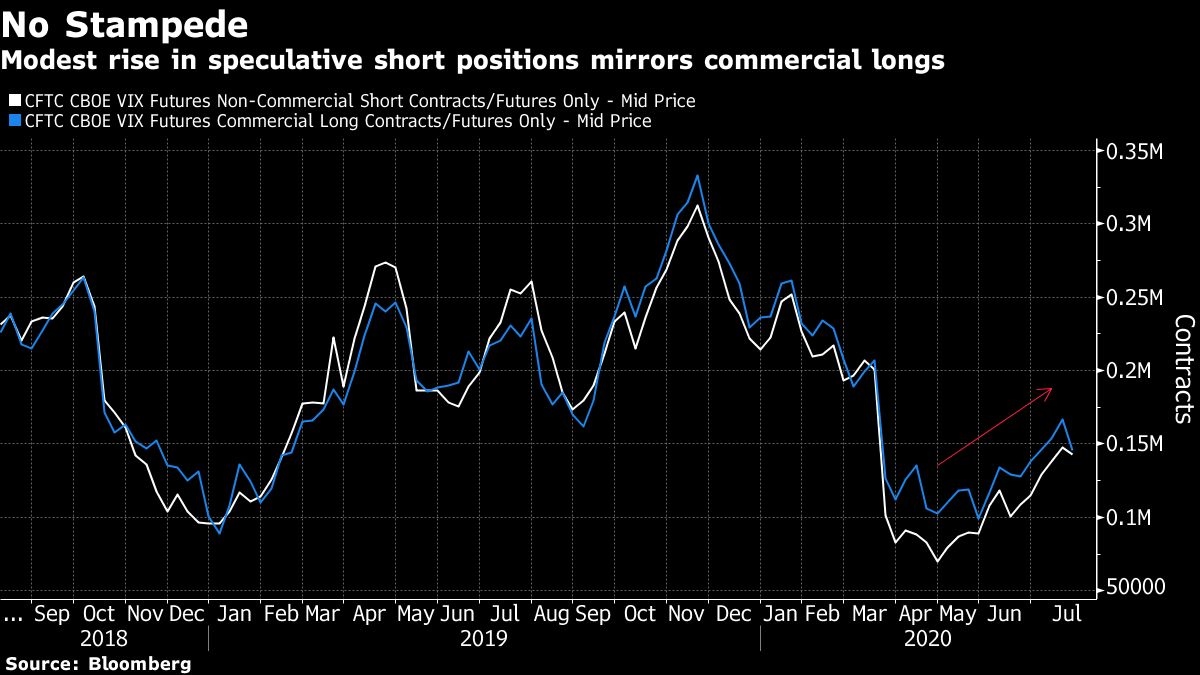 In a note Tuesday citing the shape of the curve, BNP Paribas SA strategists wrote “there looks to be plenty of opportunity to trade rolldown.”

But what looks like an inviting shape to short-sellers may ultimately prove deceptive, suggests Vance Harwood of Six Figure Investing.“Normally this level of steepness in front months would indicate an ‘all is well’ market but this market is anticipating volatility associated with the election,” Harwood wrote on Twitter.

In other words, the VIX could remain elevated or even rise as the election draws nearer, confounding short bets.

Still, over at trading firm Susquehanna, Chris Murphy notes that realized swings for the S&P 500 Index have been relatively tranquil of late, which can have a dulling effect on the VIX, a forecast of future moves. He reckons a pandemic-lashed earnings season will soon be in the rearview mirror, a potential slam-dunk for shorts.

But there are plenty of reasons for caution. Beside the heightened risk around the election, there’s the potential for more bad news on the virus, steep valuations for tech leaders and haggling over U.S. stimulus.

“Volatility traders are likely short to capture the roll yield,” said Mike Shell, founder of Shell Capital Management LLC. But “I would not be short volatility right now.”