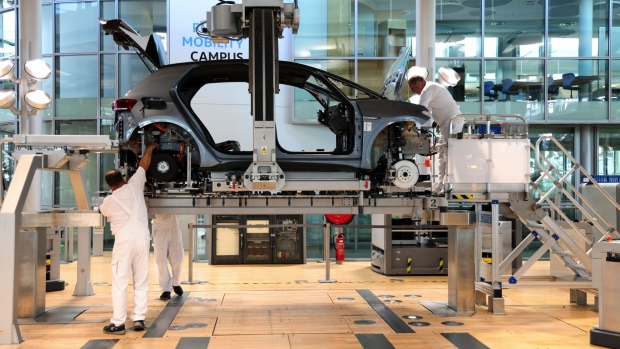 Workers assemble a Volkswagen AG (VW) ID.3 electric automobile on the production line at the automaker's factory in Dresden, Germany, on Tuesday, June 8, 2021. VW's supervisory board is proposing to investors to extend the contract of Chairman Hans Dieter Poetsch and board member Louise Kiesling for another term of five years at the next annual meeting, a spokesman said. , Bloomberg

Volkswagen, Europe’s biggest carmaker, said Thursday that relocation of production capacity for some component makers is among options in the medium term if gas shortages last much beyond this winter. Suppliers in central and eastern Europe are most reliant on Russia gas, while VW has major factories in Germany, Czech Republic and Slovakia as well as facilities in southern Europe.

“As mid-term alternatives, we are focusing on greater localization, relocation of manufacturing capacity, or technical alternatives, similar to what is already common practice in the context of challenges related to semiconductor shortages and other recent supply chain disruptions,” Geng Wu, Volkswagen’s head of purchasing, said in a statement.

Russia’s decision to throttle gas supplies to Europe has raised concerns that Germany might be forced to ration its fuel. Recent news that gas storage levels hit 90% ahead of schedule has soothed fears of acute shortages this winter, but Germany faces a challenge in replenishing depleted reserves next summer without contributions from Russia.

Southwestern Europe or coastal zones of northern Europe, both of which have better access to seaborne liquefied natural gas cargoes, could be the beneficiaries of any production shift, a Volkswagen spokesman said by phone. Suppliers relocating to those areas would gravitate toward existing Volkswagen group car factories in Portugal, Spain and Belgium.

VW’s comments echo concerns among other carmakers about the ability of their suppliers to keep making parts as energy prices surge. Mercedes-Benz AG said it has been working to identify Germany-based suppliers that would be at risk in a gas-rationing scenario and is in talks with them about shifting production to locations outside of Germany.

“Politicians must also curb the currently uncontrolled explosion in gas and electricity prices,” said Thomas Steg, the company’s head of external relations. “Otherwise small and medium-sized energy-intensive companies in particular will have major problems in the supply chain and will have to reduce or stop production.”

While gas supplies for VW’s plants are currently secured, the company has identified potential savings at its European sites to cut gas consumption by a “mid-double-digit percentage,” said Michael Heinemann, managing director of VW’s power-plant unit.

(Corrects story from Sept. 23 to say that VW is weighing options to help suppliers affected by Europe’s energy crisis. A previous version said VW was exploring reallocation of vehicle production within its European network.)