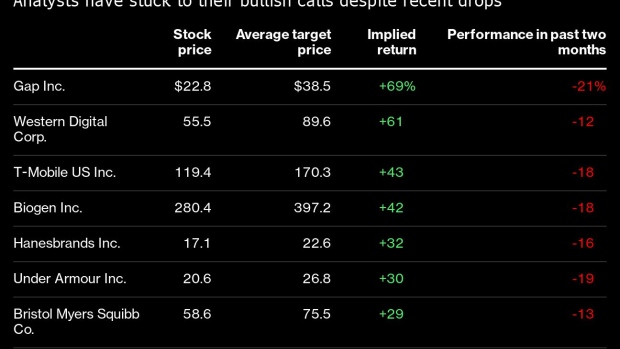 (Bloomberg) -- HODL became a rallying cry for the cypto crowd and stock-market amateurs expecting prices eventually to go only one way -- up. But now even Wall Street’s more sober professional analysts seem to share the bullish disposition.

Analysts expect almost one-fifth of the companies that make up the S&P 500 to rise at least 20% in the coming year, a degree of optimism not seen at this point in the year since 2018, according to data compiled by Bloomberg.

That conviction comes even as corporate America is facing widespread uncertainty from rising inflation, supply-chain breakdowns, labor shortages and the looming pullback on monetary stimulus by the Federal Reserve. The factors have contributed to volatility in the stock market, which tumbled last month but has since sent the S&P 500 climbing back toward its peak.

Wall Street analysts have held on to their rosy view for some stocks that have yet to rebound from recent declines. Among them are retailers Gap Inc. and Under Armour Inc., which have been pinched by supply-chain problem, and the drugmakers Bristol Myers Squibb Co. and Biogen Inc., which are dealing with investor questions surrounding their pipelines of experimental drugs.

All four have each fallen roughly 15% or more over the past two months, putting them among the worst performers in the S&P 500 over that time. But analysts’ average price targets suggest those stocks will surge back, delivering returns ranging from 29% to 69%.

T-Mobile US Inc. is another notable underperformer whose supporters on Wall Street have held steady despite the cell-phone provider industry’s challenges. The stock has slid 21% from its July peak, wiping out $38.3 billion from the company’s market value.

T-Mobile shares are now holding below $119. But the average 12-month average analyst price target has been bumped up $170.27 -- holding out the prospect of a 44% gain for anyone willing to buy the dip.