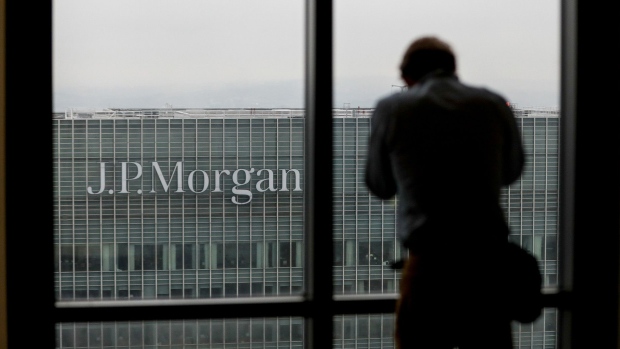 A man looks out of a window to the offices of JPMorgan Chase & Co. in the Canary Wharf business and shopping district in London. , Photographer: Simon Dawson/Bloomberg

(Bloomberg) -- Deluged by client orders and often working from home, Goldman Sachs Group Inc.’s workforce generated 15% more revenue per employee during the tumult of 2020. But as the year wound down, the firm had spent an average of just 2% more on each person.

Inside JPMorgan Chase & Co.’s investment bank, revenue per employee surged 22%. The figure for pay: up 1%.

For months, the question has hung over the industry: How would investment banks reward workers hauling in a windfall during a pandemic spreading pain and economic disparity? The answer -- at least broadly -- is not so lavishly. While few big U.S. banks disclose figures revealing how they compensated Wall Street-oriented workforces, the few that do offered striking snapshots of restraint. Even companywide figures at major banks hint at similar trends.

And no wonder: Earnings reports in recent days underscored anew how hard 2020’s tumult battered other business lines such as lending, where banks stockpiled tens of billions to cover bad loans. Despite the flurry of activity on Wall Street, total revenue at the nation’s six banking giants was little changed last year. The group boosted average pay per employee by a mere $271.

Now those same firms are bracing for tougher times in Washington, where Democrats skeptical of large financial-industry paychecks are ascendant.

From President Joe Biden’s recent picks of veteran watchdogs -- such as Gary Gensler for the Securities and Exchange Commission and Rohit Chopra for the Consumer Financial Protection Bureau -- to his focus on inequality, there are signs the industry faces both tougher scrutiny and regulation.

The changing of the guard may further embolden lawmakers and other critics who want to publish more data on industry wages, curb pay for chief executive officers and restrict bonuses that could encourage risk-taking.

“The optics aren’t good” right now for large payouts, said Mayra Rodriguez Valladares, a former analyst at the Federal Reserve Bank of New York who now trains bankers and regulators through her consulting firm, MRV Associates Inc. “The more you reward the big lenders, the big traders, they take on more risk,” which would attract criticism, she said.

Indeed, Citigroup Inc. decided to cut bonuses for dozens of its top executives after the bank was reprimanded by regulators last year, a person with knowledge of the matter said this week.

Pay per employee offers a look at compensation trends that adjusts for changes in the size of a workforce. Calculations for this story are based on year-end headcount figures.

To be sure, figures are averages that don’t reflect what banks award particular rainmakers, who can still score multimillion-dollar bonuses. And it’s not unusual for senior executives to deprive some people of raises to fund more-generous bonuses for those that outperform or are vulnerable to poaching.

Hints have been emerging for weeks that some banks would opt to keep a lid on compensation for Wall Street operations pulling in loads of cash, ending a years-long period in which revenue and compensation have generally moved by similar degrees.

By late November, Bank of America Corp. executives were discussing proposals to keep its bonus pool for sales and trading at the prior year’s level. By December, Citigroup aimed to leave its overall pot unchanged for equities, while boosting it for bond traders by at least 10%. More-generous increases approaching 20% were under discussion in Goldman Sachs and JPMorgan, but even there, the thinking was that moves would vary widely.

Ultimately, Goldman’s earnings report this week showed the firm cut the share of revenue it spent on compensation to 30% last year, down from about 34% or more in the prior three years. At JPMorgan’s corporate and investment banking division the ratio fell to just 24%, down from 28% in those earlier years. Morgan Stanley also shaved two percentage points off its compensation ratio.

A Goldman Sachs spokeswoman cited comments by Chief Financial Officer Stephen Scherr in response to a request for comment.

“Our philosophy remains to pay for performance, and we are committed to compensating top talent,” Scherr told analysts during an earnings conference call Tuesday. “Our full year compensation ratio is at a record low, reflecting the operating leverage in our franchise. As we have said in the past, we view the compensation ratio metric as less relevant to the firm as we build new scale platform businesses.”

The last time revenue growth and compensation growth diverged so wildly was in 2009, when Wall Street earnings rebounded from the 2008 financial crisis amid a withering public backlash against the industry’s pay practices. Critics of the industry’s excesses have kept a close eye on bonus trends ever since.

Early last year, as the Covid-19 outbreak shuttered businesses and put millions out of work, U.S. lenders began announcing plans to grant special pay to rank-and-file staff. All of the six banks except Wells Fargo & Co. ended up increasing their total spending on compensation.

Now, with 2020 over, one open question is how boards will reward C-suite executives including CEOs. Banks usually start announcing those decisions in the latter half of January.

The 2010 Dodd-Frank Act paved the way for heavier regulation of executive compensation. But several of its key rules were never fully adopted. The prohibition on incentive-based payment arrangements that can encourage inappropriate risk-taking by bankers still hasn’t yet been finalized. And while some major banks have voluntarily instituted clawback provisions since the 2008 crisis, few have used them.

Rodriguez Valladares expects policy makers will pay more attention to the gaps in pay between senior executives and employees on the lower rungs.

“Where legislators can play a very good role is to say: ‘Well hang on, you’re getting paid 100 times more than your teller, why is that?’” she said. “‘And you’ve been underpaying these people, so pay them more.’”