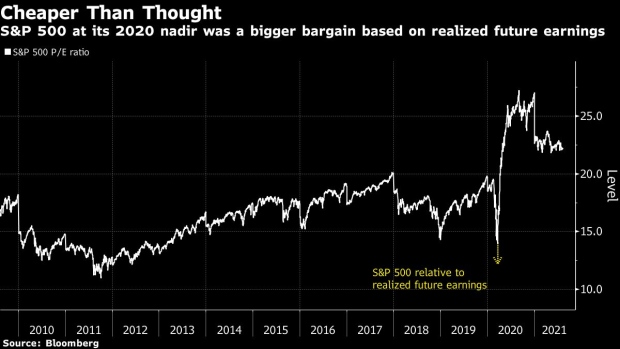 (Bloomberg) -- There’s a whole class of Wall Street pundits whose lone job, it often seems, is to bash stock investors for assigning irrational valuations to companies. Rarely has the chatter from this crowd been as loud as it was in the Spring of 2020, when the pandemic was raging and the economy was collapsing and stocks were suddenly rebounding and nothing seemed to make any sense.

It turns out in the end that they were right. Valuations were wildly off. But in exactly the opposite way that they had proclaimed they’d be. Corporate profits have roared higher in such a spectacular fashion that those valuations -- when analyzed against the actual earnings reported a year later -- were almost 20% cheaper than analysts thought when investors began piling into the S&P 500 in April 2020.

In other words, that moment was unequivocally one of the greatest bargain-hunting opportunities in decades. And all the gains that followed that spring were actually a rational attempt by investors -- as unlikely as this may have seemed at the time -- to bring valuations closer to where they should be.

Of course, it didn’t have to work out this way. There were any number of scenarios in which earnings would have taken a lot longer to bounce back and the rally would have quickly proven overdone.

But as the S&P 500 today sets record after record, putting it on the cusp of a 100% gain from that March 2020 low, the ex-post facto analysis serves as an important reminder to those Cassandras who are once again insisting the stock market is forming a bubble that’s about to burst. At 21 times forecast earnings, the S&P 500 indeed sits near the highest multiple since the dot-com era. But what if those profit estimates are too low this time, too?

“It really gets to the crux of the whole debate in terms of how should the market, specifically some of these higher-growth parts of the market, be valued,” said Mark Freeman, chief investment officer at Socorro Asset Management LP. “The market over time follows earnings. Sometimes it gets ahead of itself, sometimes it’s behind. But it’s not behaving irrationally.”

S&P 500 companies have beaten estimates by at least 15% for five quarters in a row, driving their combined annual income to $183.91 a share by June. Based on reported earnings, the index’s pandemic bottom looks like a better deal -- trading at 15.4 times future profits in April 2020. Going by analyst estimates back then, the multiple was 18.7. (The realized future P/E was as low as 12 based on the price at the March 23 bottom.)

Despite a stretch of robust results, analysts have refrained from raising their numbers in any big way. Since the end of June, forecast profits have increased roughly 3% for this quarter and next, data compiled by Bloomberg Intelligence show. For the next two years, the pace of upgrades is even slower.

Analysts can be forgiven by staying put. Corporate guidance has been muted in recent reporting seasons, and according to data tracked by Bank of America Corp., mentions of “optimistic” or “optimism” on earnings calls fell to the lowest level since the first quarter of 2020.

It’s not hard to see why caution persists. A resurgence in Covid cases is forcing businesses to delay their return-to-office plans. And President Joe Biden’s proposed tax hikes are looming.

To Mike Wilson, chief U.S. equity strategist at Morgan Stanley, analyst calls for profits to reach $216 a share in 2022 are too sanguine. His projection is $5 lower.

“Consensus earnings estimates next year have baked in unrealistic margin assumptions” in the context of higher costs and taxes, Wilson wrote in a note last week.

If stock valuations are any guide, the market is siding with the bullish view. Using historic P/Es as a rough indication of what kind of future earnings are embedded, a return to the five-year average multiple of 18.2 would mean the market now anticipates companies to earn $244 a share in the next year.

Ben Laidler, eToro’s global markets strategist, says the ability to deliver record-high profitability in the face of all the margin anxiety underlines corporate America’s robust earnings power. To him, the reopening trade hasn’t even started yet, with the average economy around the world only half open and the majority of the global population not yet vaccinated.

“That’s where the mistake is being made -- the leveraged earnings to incremental improvement in revenues,” Laidler said in an interview on “Bloomberg Surveillance.” “This reopening trade, which is going to push revenue and which is going to push earnings, has barely started. Maybe delayed somewhat here? Absolutely. But it’s not derailed.”