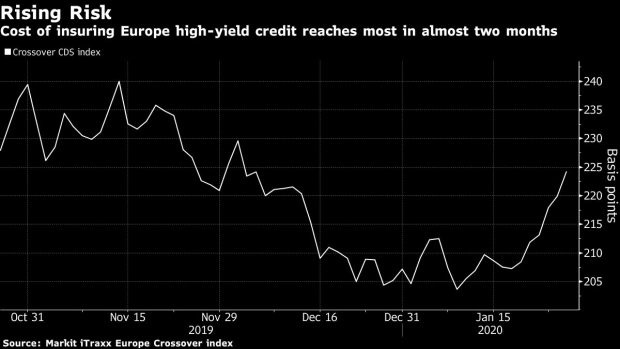 (Bloomberg) -- From stock volatility to currency options, the global risk-off tone spurred by the spreading coronavirus is showing up in derivative markets of all stripes.

Hedging just turned more expensive for investors in one of the biggest China equity ETFs, while the cost of insuring some of Europe’s riskiest debt jumped. With traders rushing to react to the hard-to-price news that the casualty count is rising, risk assets are a sea of red.

“The latest health scare is likely to worsen before getting better, which could lead to more significant near term derisking,” JPMorgan strategists led by Mislav Matejka wrote in a note. “But we note that past outbreaks have tended to drive only limited market falls.”

In Asia, Japan set the tone with the Topix index erasing its gains for the year. Miners have led a 2% decline in European equities, while Treasury yields are slumping and haven currencies rising with gold.

Here’s a look at some of the reaction in the land of options and beyond.

The Cboe Volatility Index continued last week’s jump Monday, reaching the highest since October as U.S. stock futures pointed to an ugly start on Wall Street. The benchmark gauge for turbulence in American equities is derived from options in the S&P 500. An equivalent gauge for Japan’s Nikkei 225 Stock Average surged by the most in over a year to its highest level since late August.

Implied volatility in BlackRock Inc.’s iShares China Large-Cap ETF surged to the highest since October. Options on the popular fund were among the most active U.S.-listed contracts on Friday, with 85,000 calls bought as traders positioned for more volatility. The $4.7 billion ETF was down more than 5% in pre-market trading on Monday.

In currency markets, risk reversals indicated the most bullish sentiment for the yen in five months as volatility curves inverted. The Chinese yuan was a near-mirror image, with the options metric indicating greater bullishness on the U.S. dollar.

A key measure of risk for Europe’s junk-rated debt also climbed by the most in nearly four months. The Markit iTraxx Crossover Index, which measures the cost of insuring the bonds of the region’s junk-rated companies, rose as much as 5.5 basis points to 224.5, the most since early October. Gauges for insuring investment-grade and financial bonds against default also rose.

​A rally in U.S. Treasury markets has caught Wall Street off-guard in the past week with the 10-year yield falling to within 10 basis points of moving below its three-month counterpart, an inversion often viewed as a recession indicator.

While relentless fixed income-demand, portfolio rebalancing and hedging behavior can spur Treasury buying, the potential hit to growth and market sentiment from the coronavirus outbreak has put an inversion back in view.

--With assistance from Hannah Benjamin.

To contact the reporters on this story: Gregor Stuart Hunter in Hong Kong at ghunter21@bloomberg.net;Yakob Peterseil in London at ypeterseil@bloomberg.net

To contact the editors responsible for this story: Christopher Anstey at canstey@bloomberg.net, Sid Verma, Sam Potter