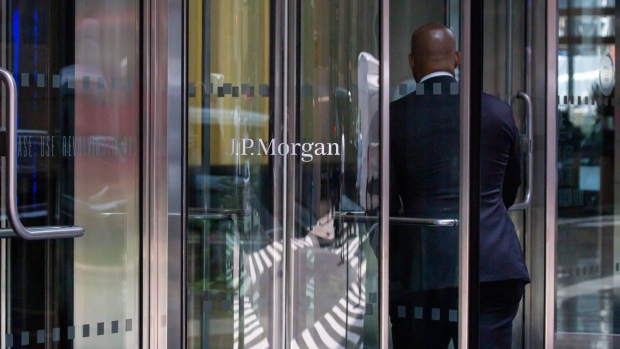 An office worker enters the JPMorgan Chase & Co. headquarters in New York, U.S., on Thursday, July 22, 2021. After a year of Zoom meetings and awkward virtual happy hours, New York's youngest aspiring financiers have returned to the offices of the city's investment banks, where they're making the most of the in-person mentoring and networking they've lacked during the pandemic. , Bloomberg

(Bloomberg) -- Wall Street’s biggest banks are expected to hit the corporate bond market after they report quarterly results in an effort to raise money before the Federal Reserve knocks borrowing costs higher.

“That said, we do think the bias is on the upside and will not be surprised if we see closer to $35-$38 billion,” the analysts wrote in a note Tuesday. Even if banks decide to sell bonds next week, issuance is still likely to be down due to Martin Luther King Jr. Day on Monday and an earnings blackout period.

United Airlines Holdings Inc., American Airlines Group Inc. and streaming provider Netflix Inc. are on tap to report next week, which could impact bond prices. Netflix is poised to become a rising star this year with about $16 billion equivalent of bonds eligible for Bloomberg’s high-grade indexes, according to Bloomberg Intelligence credit analysts Stephen Flynn and Suborna Panja.

Investors are looking to shorter-term bonds as they grow more concerned about rising yields, which can hit longer-term bonds hardest. As of Thursday, 41% of issuance in the investment-grade market has been in the 10 year-or-greater part of the curve, compared with about 48% in 2021 and 58% in 2020.

“We love shorter dated credit as a natural hedge against inflation, rising rates and potentially deteriorating credit fundamentals,” said Hunter Hayes, senior vice president and portfolio manager of the Intrepid Income Fund at Intrepid Capital Management. Hayes sees opportunities for bonds maturing in the next couple of years for both investment-grade and high-yield markets.

Lower-rated CCC debt is also attractive, according to Barclays Plc strategists Bradley Rogoff and Jeff Darfus. Lower-rated junk bonds tend to fare better than higher-graded peers in a rising-rate environment due to their lower duration and credit-specific risk, which make them less correlated to interest rates.

“While year-to-date moves have favored CCCs, we think there are still some attractive CCC opportunities,” they wrote in a note Friday.

U.S. leveraged loans, meanwhile, have been firing on all cylinders so far this year, with investors drawn to the asset class as a guard against rising rates and companies eager to bring deals to those interested buyers.

At least 10 borrowers have commitments due next week including infrastructure software firm Quest Software Inc., which is marketing about $3.6 billion of loans. The two-part transaction is split between single B and CCC graded tranches that will finance its acquisition by Clearlake Capital Group.

Traders should keep an eye on low-rated tech deals going forward, according to Matthew Mish, head of credit strategy at UBS Group AG. He says there’s weakness in parts of the leveraged loan market where there’s been plenty of supply from low-graded borrowers. “We’re watching a number of companies in the tech sector, particularly the single B tech sector,” he said.