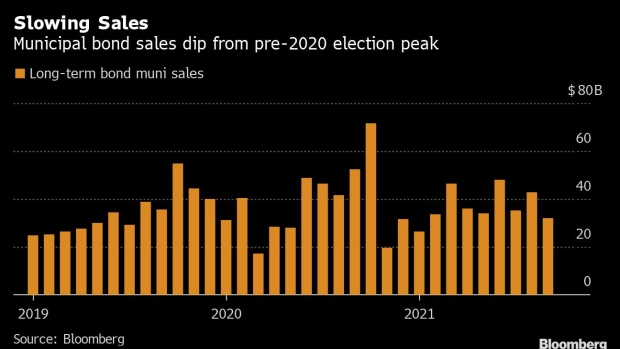 (Bloomberg) -- Wall Street’s municipal-bond underwriters may not get as big a year as they once expected.

Even before this week’s selloff drove 10-year benchmark yields to the highest since March, the volume of new state and local government bond sales was slowing from last year’s record-setting pace.

Such governments sold about $33 billion of debt in September, a 30% drop from a year earlier, according to data compiled by Bloomberg. That’s left issuance so far this year at $335 billion, up less than 3% from 2020, thanks to a surge in borrowing in the first half of 2021.

On top of that, next month’s issuance may trail the nearly $72 billion that flooded the market last October, when officials rushed to get ahead of any potential havoc following the presidential election.

The slowdown reflects the rise in interest rates, the economic uncertainty cast by the delta variant, and a decline in taxable bond sales for a key type of refinancing as Democrats in Congress push to restore governments’ ability to sell cheaper tax-exempt debt for that purpose instead. The odds of President Joe Biden enacting an infrastructure program has been another wild card.

Many municipal-bond strategists had high expectations for 2021, with those at Citigroup Inc., Morgan Stanley and Municipal Market Analytics late last year all forecasting that sales would hit $500 billion or more. Long-term municipal debt sales totaled about $455 billion last year, not including those with corporate-bond identifiers, according to data compiled by Bloomberg.

Yingchen Li, co-head of municipal-debt research at Bank of America Corp., attributed the recent slowdown to a drop in taxable debt issued for refinancings.

“Now, the question is: is it possible to catch up?” said Li. The bank has maintained its annual forecast even though issuance is behind schedule by an estimated $20 billion.

“It’s really whether we can make up $20 billion more in refundings,” he said. “If there’s a lot more new money than we thought, then that’s another way to catch up. The fourth quarter is normally very big.”

Analysts at Citigroup led by Vikram Rai have already rolled back their forecast, predicting $515 billion of long-term sales this year, down from the $550 billion projection made at the end of 2020. Rai stands by that call, saying that the fall season typically brings stronger sales.

“It’s definitely do-able,” he said in an interview.

Tom Kozlik, head of municipal strategy and credit at Hilltop Securities in Dallas, has been estimating that states and local governments will sell around $460 billion. He said the pace of sales next month will be a big factor in whether his target proves correct, given that it’s a crucial month before the winter holidays.

JPMorgan Chase & Co.’s Peter DeGroot, head of municipal research and strategy for the bank, cut his forecast in the middle of the year because of the dip in taxable debt sales. He now predicts about $465 billion by the end of the year, including those sold into the corporate-bond market.

Yet even if 2021 sales fall short of last year’s record, issuance could be the second-busiest year since at least 2013, according to data compiled by Bloomberg.

“At the onset of the year we expected another year of record supply,” DeGroot said in an interview. “That record supply was largely beholden to an increase in taxable issuance.”

“We do expect issuance to be somewhat lower but still relatively high,” he said.