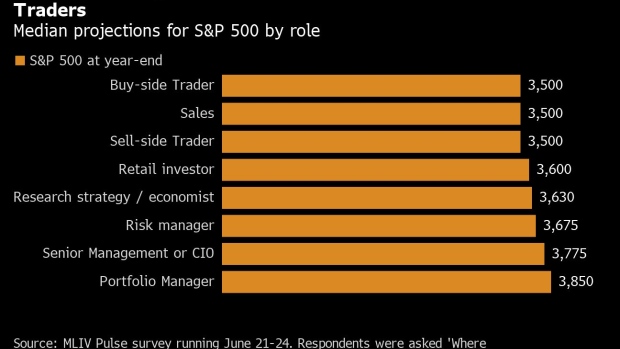 (Bloomberg) -- Money managers betting on a sustained global rebound will be left sorely disappointed in the second half of this crushing year as a protracted bear market looms, even if inflation cools.

The good news: After the historic plunge, stocks and bonds aren’t far from bottoming out.

That’s the key message for Wall Street and beyond in the latest MLIV Pulse survey, after another week plagued by recession worries.

The more than 1,700 respondents harbor plenty of fear that the Federal Reserve will end up triggering an economic downturn by ramping up interest rates to tame price pressures that remain largely supply-side driven. Yet survey contributors are less bearish on the market outlook than the professional class of doom mongers -- projecting much of the pain is already priced in.

After succumbing to a bear market, the S&P 500 Index is seen closing 2022 at 3,700. While that’s far lower than the Wall Street consensus, it’s a modest 5% decline from last week’s close -- and above the lows already notched this year. Meanwhile, the 10-year Treasury yield is seen edging up to 3.5%. While that would constitute an 11-year high, it’s mercifully lower than the 4% pain threshold set by the likes of Bridgewater Associates.

So after the dramatic selloff in the first half, another big rout to close out this exhausting year is seen as unlikely. On the flip side, MLIV readers say a rally in the coming months would prove nothing more than a bear-market bounce as growth risks mount.

“Valuations look pretty reasonable,” Michael Bell, a global market strategist at JPMorgan Asset Management, said on Bloomberg TV. “If we get a recession then I think there’s potentially further downside. But with markets down as much as they are year-to-date, it’s going to be hard to sell at these levels and buy back in cheaper.”

Tightening by the Fed and other major central banks has roiled global stock markets this year, with the S&P 500 down 18% and the Nasdaq 100 losing 26%. The 10-year Treasury yield has doubled in a bond-market selloff, the likes of which the world hasn’t seen in more than two centuries, according to Deutsche Bank AG. Geopolitical risks are also preying on investors’ minds with Russia’s war in Ukraine driving up commodity prices.

While the rout may not be over, the bottom may not be far off, the survey suggests. The median projection that the S&P 500 will close out the year at 3,700 marks an increase from the 3,500 bottom that survey participants predicted just a month ago. It’s also far higher than the gut-wrenching 2,900 forecast from quant strategists at Societe Generale SA.

One reason: Headline inflation looks to have peaked, ending the year at 6% even as crude oil stays at multi-year highs, according to respondents. The bad news is that growth may become a more pressing concern than inflation as the year advances. The Pulse poll suggests US unemployment will rise to 4.2% from 3.8% currently.

In survey submissions, respondents were divided on whether a global recession or fresh inflation surprises this year will constitute the most likely shock ahead: Stagflation predictions ranged between 10% and 90%. Several readers also flagged an overly aggressive Fed as a major worry.

“We’ve raised our estimate probability of a recession in the US to about a 50% chance, like a flip of a coin over the next couple of years,” Sharon Bell, equity strategist at Goldman Sachs Group Inc., told Bloomberg TV. “So all those factors are going to mean a clear downturn in growth.”

MLIV readers are more dovish than the Wall Street consensus. The median view of respondents suggests a further 125 basis points of Fed rate hikes is in the cards this year, a full 50 basis points less than market-implied odds last week. While the Bank of England has already raised rates by one percentage point in 2022, respondents expect fresh policy-tightening of that magnitude. The European Central Bank is seen hiking by just 100 bps in total this year.

With the monetary and economic outlook shrouded in doubt across the world, respondents are divided on the trading road map. Asked to rank their five favorite asset classes for the rest of this year, more than a quarter put commodities dead last, while 29% ranked it first. Developed-market stocks received more love than government bonds.

The collective antipathy toward credit is notable, with about 8% picking it as their preferred asset. Corporate bonds, which suffer both when rates rise and when defaults tick up in a slowing economy, have had an awful start to the year. The Bloomberg US Corporate index is on course to post another historically bad quarter.

Meanwhile the crypto winter is largely a sideshow for MLIV readers, with respondents saying they spend a negligible 1% of their professional time dedicated to the speculative industry.