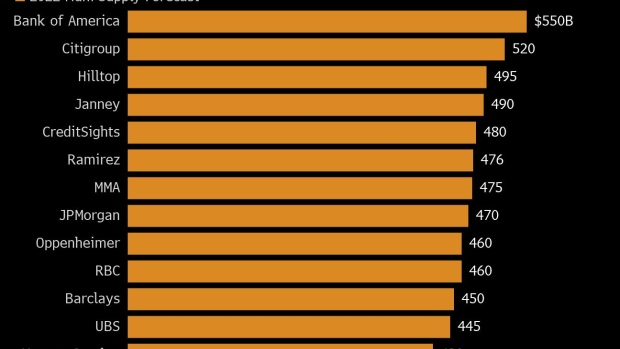 (Bloomberg) -- The optimism Wall Street has for municipal bonds this year remains intact, even if the promise of higher interest rates is hitting munis almost as hard as other markets.

“There are aspects that are unique to the muni market and just looking at those, it’s poised to be a pretty good year,” said Daniel Solender, head of municipals at Lord Abbett & Co. “The economy is doing well, a lot of balance sheets are flush with cash from the stimulus. The true wild card is what is going to happen with rates.”

The $4 trillion municipal market is likely to benefit from a continued bounty of new bond sales and a strong credit environment, with states and localities bolstered by tax revenues and pandemic-era federal aid, a review of annual outlooks and interviews with analysts and investors at more than a dozen firms show.

The forecast for investor demand is less robust, with the Federal Reserve poised to raise rates to combat the fastest inflation in almost 40 years and U.S. tax increases less likely than anticipated last year. So far this year, tax-exempt municipal bonds have lost about 1.3%, after gaining 1.5% for all of 2021, and they are on track to post the worst monthly performance since February, according to Bloomberg’s benchmark index.

While January’s muni return isn’t all that attractive, it beats those of U.S. Treasury securities and investment-grade corporate debt, which have dropped 1.95% and 2.8% respectively, according to Bloomberg indexes.

“It’s likely that muni bonds won’t perform as well as they used to, but I don’t expect it to be a massively awful year,” said Cooper Howard, director of fixed income strategy at the Schwab Center for Financial Research.

A troubling sign is a recent drop in demand. Muni mutual funds saw $239 million withdrawn during the week ended Wednesday, halting a streak of 45 straight weeks of gains, according to Refinitiv Lipper US Fund Flows data. Municipal bond funds had a record amount of inflows in 2021, helped by anticipation of higher taxes from the Biden administration’s spending plans, some of which are now stalled in Congress.

“The likelihood that demand weakens is higher in 2022 than it was in 2021,” wrote Adam Stern, co-head of research at Breckinridge Capital Advisors in an outlook note published earlier this month.

In another signal of waning investor interest, about $1.4 billion of municipal bonds were being offered for bids from potential buyers on Thursday, the most since April 2020, according to a Bloomberg index.

Read more: Muni Bonds Out for Bid Surge to Most Since April 2020 Amid Slide

“Treasuries are really in the driver’s seat,” Paul Malloy, head of municipals at Vanguard Group, said in an interview. “While fundamentals are really good, we expect munis to move alongside Treasuries.”

Still, most market professionals aren’t calling for a major retreat from the asset class.

“We believe that investors’ appetite toward munis will continue in 2022; however, should tax rates be lower than current expectation, there could be a mild pullback in demand,” according to Brian Rehling, Peter Wilson and Luis Alvarado at Wells Fargo Investment Institute, in a Jan. 18 strategy note. They have a “favorable” view of municipal bonds, saying that rising rate cycles by the Fed have historically been positive for the market.

Analysts agree that borrowing by state and local governments will continue apace. Municipalities sold a record of more than $460 billion of debt in 2021, according to data compiled by Bloomberg, and they’re likely to match or exceed that total this year.

“We’re off to a slow start but issuance will pick up,”  said Solender of Lord Abbett. “Issuers have a lot of cash on their balance sheets. That may make governments more confident in issuing more bonds.”

States and local governments alone received $350 billion of stimulus aid from the federal government, not counting additional funds that flowed to other municipal borrowers like colleges and hospitals.

“Municipal credit enters the year on a strong footing, largely due to assistance of the federal government during the pandemic,” wrote Patrick Luby and John Ceffalio, municipal analysts at CreditSights, in a 2022 outlook note published on Jan. 19. Their “base case” is that credit will continue to improve as the economy recovers and the worst of the pandemic passes.

Peter Hayes and Sean Carney, municipal heads at BlackRock Financial Management Inc., one of the largest municipal bond investors, say the market will continue to outperform other fixed-income assets, even if returns are muted.

“While broader bond markets tend to struggle during periods of rising rates, munis have proven relatively resilient to interest rate increases,” Hayes and Carney wrote in a report to clients. “We will focus on defensive sectors and pay particular attention to bond structures, favoring those with higher coupons and shorter calls.”

The BlackRock managers advise investors to avoid bonds sold to finance speculative projects, like private train lines and retail shopping centers. “Many of these deals are extremely risky, with bondholders ultimately assuming equity-like risk for mid single digit yields,” they said. “We believe many of these projects are ‘uninvestable’ based on their upside down, risk reward profile.”

Schwab’s Howard recommends lower-investment grade debt, those in the A or BBB rating tiers, because “credit concerns are relatively low right now,” he said. He doesn’t think investors are being properly compensated for the risk of taking on junk or unrated bonds.

And in a nod toward coming interest-rate increases, Thornburg Investment Management Inc. portfolio managers are “invested in more floating-rate notes, which will serve as a buffer to protect the short end of our portfolio if rates move higher,” wrote Eve Lando, David Ashley and John Bonnell, adding “since spreads have been very narrow, we have preferred higher-quality credits over lower-quality ones.”