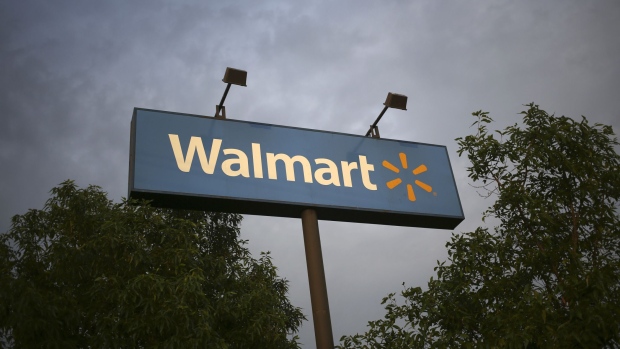 Wal-Mart Stores Inc. signage is displayed outside of a store in Louisville, Kentucky, U.S., on Friday, May 15, 2015. Photographer: Luke Sharrett , Bloomberg

(Bloomberg) -- Walmart Inc.’s financial-technology venture agreed to buy two small companies and rebrand itself in a step toward providing an app that enables customers to save, borrow and receive money.

The venture, Hazel, will acquire fintech platforms Even and ONE for an undisclosed amount, Walmart said in a statement Wednesday. The combined business will operate under the ONE brand name after the deals close, which is expected to happen in the first half of this year.

The moves signal an acceleration in Walmart’s plans to shake up the banking world by offering tech-driven financial services to its 1.6 million U.S. employees and more than 100 million weekly shoppers. Omer Ismail, a Goldman Sachs Group Inc. veteran whom Walmart poached last year, will lead ONE as chief executive officer.

“Consumers everywhere are being left behind by the world of financial services,” Ismail said in the statement. “Our vision is clear: build on Even and ONE’s success to offer a product that offers consumers the best way to spend, the best way to access their wages and helps millions save and grow their money.”

David Baga, CEO of Even, and Brian Hamilton, co-founder of ONE, will also serve in leadership positions. The combined business will have more than 200 employees and be capitalized with more than $250 million in cash on the balance sheet.

After the deals close, ONE will expand with new hires and potential mergers and acquisitions, Walmart said. Hazel is also backed by Ribbit Capital, an investor in stock-trading platform Robinhood Markets Inc.

Even’s online platform offers employees a way to access their wages, budget and save. ONE partners with Coastal Community Bank to combine saving, spending and borrowing in a single digital account.

Walmart, based in Bentonville, Arkansas, is also building businesses in health-care and digital advertising in a push to expand beyond stores and e-commerce.