Walmart Inc. tumbled the most in more than 20 years -- and was headed for the worst rout since 1987 -- after cutting its full-year profit outlook due to inflationary pressures, especially in food and fuel.

The disappointing performance shook Wall Street’s faith in Walmart’s ability to cope with higher costs for merchandise, transportation and labor. The results also underscored the pressure on U.S. consumers as soaring prices send sentiment to the lowest in a decade. Walmart and peers already were facing tough comparisons to early 2021, when federal stimulus payments bolstered household spending during the coronavirus pandemic.

Chief Executive Officer Doug McMillon set the stage for more price increases at the world’s largest retailer, saying the company would seek to balance customers’ needs with the goal of delivering profit growth. His goal is to raise prices while seeking to stay below competitors and limiting the price bumps on entry-level food items.

“Price leadership is especially important right now,” McMillon told analysts. He pledged to vowed to put the disappointing quarter “behind us and have a strong year.” 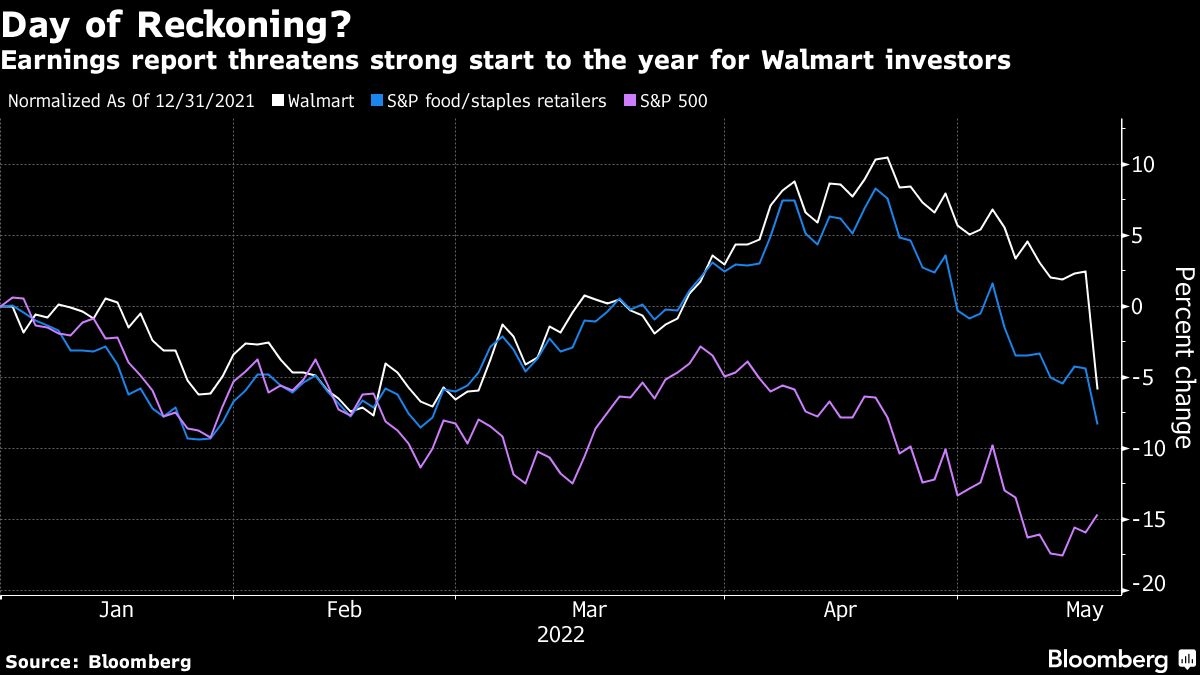 The shares sank almost 11 per cent to as low as US$132.21 in New York for the biggest intraday drop since February 2000. Walmart had gained 2.4 per cent so far this year through Monday, bucking a selloff of U.S. stocks.

Earnings are likely to drop about one per cent this year, the retailer said in a statement Tuesday, abandoning its previous forecast for a mid-single-digit gain. In the first quarter, adjusted profit sank to US$1.30 a share, below the lowest of 29 analyst estimates compiled by Bloomberg.

Walmart’s size gives it a unique perspective on the U.S. economy, and analysts pressed the company Tuesday for insight on whether shoppers are pulling back their spending as they get squeezed by the highest inflation in four decades. The retailer said it’s seeing some consumers switch to cheaper private-label brands in the grocery, but at the same time, there’s growing demand for some high-end items like video-game consoles.

“The operating backdrop has become increasingly complex,” Edward Kelly, an analyst at Wells Fargo & Co., said in a note to clients in which he referred to Walmart by its ticker symbol. “Consumers are starting to make tougher choices, and while WMT is well positioned for trade down as a value player, it needs to take more price.”

Surging fuel prices -- spurred in part by Russia’s invasion of Ukraine -- pushed up costs faster than Walmart was able to pass them along to consumers last quarter, McMillon told analysts. He also called out labor challenges and temporary overstaffing due to COVID, higher costs for containers and storage, excess inventory, and a shift in spending away from general merchandise, which typically has higher profit margins than groceries.

For the current quarter, Walmart said it now expects earnings to be “flat to up slightly” compared with a prior view of a low- to mid-single-digit increase.

Same-store sales at US Walmart stores rose three per cent in the first quarter, excluding fuel, topping analyst estimates for two per cent growth. Revenue climbed 2.4 per cent to US$141.6 billion, while Wall Street had expected US$139.1 billion.

Walmart’s revenue gains are consistent with new government data released Tuesday showing that US retail sales grew at a solid pace in April despite rising prices.

For the full year, Walmart raised its forecast for same-store sales growth at US Walmart stores to about 3.5 per cent, up from a prior view of “slightly above three per cent.”

E-commerce grew one per cent in the quarter. The online business got a substantial boost during pandemic lockdowns, but demand has been slowing as shoppers venture back into stores.