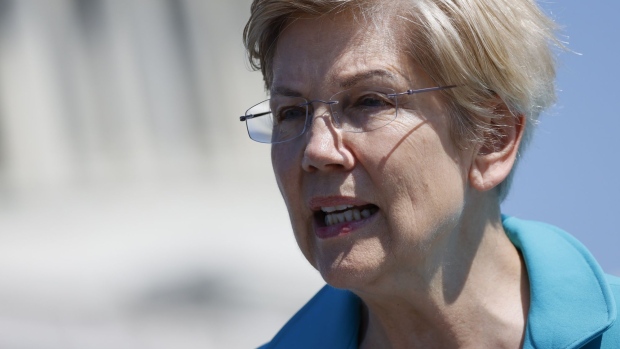 Senator Elizabeth Warren, a Democrat from Massachusetts, speaks during a news conference outside the US Capitol in Washington, D.C., US, on Tuesday, July 12, 2022. Lawmakers joined consumer protection advocates to urge action on their legislation to address predatory overdraft fees. , Bloomberg

(Bloomberg) -- A group of Democratic senators led by Elizabeth Warren is redoubling efforts to get Wall Street’s main regulator to clamp down on executives’ ability to use inside information to make well-timed stock trades.

The US Securities and Exchange Commission should quickly move to toughen its rules, the lawmakers said in a letter Friday to SEC Chair Gary Gensler. “Corporate insiders cannot be allowed to continue to trade based on insiders’ knowledge with impunity,” they wrote.

In December, the SEC proposed new restrictions for pre-arranged plans that senior executives often use to sell stock and avoid being accused of insider trading later. Among other things, the agency proposed forcing insiders to wait roughly four months from when they schedule a trade before they sell.

The scheduled stock sales, so-called 10b5-1 plans, are common across Corporate America.

Under the proposal, which could be finalized in the coming months, companies would be required to disclose in regulatory filings whether executives have adopted or made any changes to when they plan to sell stock. Employees would also be prevented from having multiple plans for trading the same security.

While Warren and the other lawmakers lauded the plan as a solid first step, they’re asking the regulator to go even further.

“We urge you to consider additional, strong rules that would prevent these abusive practices and protect the integrity of our capital markets, and that you implement them without delay,” read the letter, which was also signed by Democrats Chris Van Hollen, Tammy Baldwin, as well as Bernie Sanders, an Independent. A copy was reviewed by Bloomberg News.

The senators asked the SEC to extend the “cooling-off period” between a trading plan’s adoption and its execution to 180 days and said that the required delay should apply to more employees. The lawmakers also called for more limits on single-trade plans.

The issue has also garnered the attention of local governments.

New York City Comptroller Brad Lander urged the agency to crack down on the issue and asked a medical device company’s shareholders to revise its policies this April, after a Bloomberg News article highlighted certain trades by its former executive.