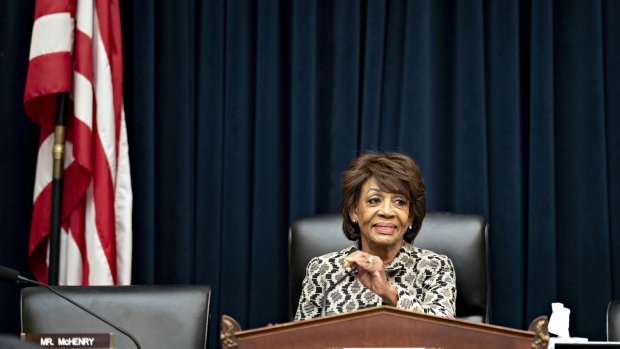 Representative Maxine Waters, a Democrat from California and chairwoman of the House Financial Services Committee, arrives to a hearing with Jerome Powell, chairman of the U.S. Federal Reserve, not pictured, in Washington, D.C., U.S., on Tuesday, Feb. 11, 2020. Powell said the U.S. central bank is keeping a close eye on fallout from the deadly coronavirus outbreak in China, singling it out among risks threatening the U.S. and world economy. , Bloomberg

(Bloomberg) -- A key lawmaker is calling on President Biden to nominate Sandra Thompson, acting director of the Federal Housing Finance Agency, to lead Fannie Mae and Freddie Mac’s regulator on a permanent basis. Maxine Waters, chair of the House Financial Services Committee, issued a statement Thursday endorsing Thompson and urging Biden to appoint a person of color to the FHFA job, which has significant influence over the $10 trillion mortgage market. Thompson, a long-time senior official at the agency, has been at the helm on a temporary basis since June when the Biden administration ousted her predecessor, a Trump appointee.

Waters’ endorsement is significant because it could lesson the chances that another potential candidate, Mike Calhoun -- who runs the Center for Responsible Lending -- will get the job. The Biden administration has considered naming Calhoun for the role, according to some analysts, but has not yet made an announcement.

“It is rare for a House Democratic committee chair to weigh in publicly on this type of decision,” Jaret Seiberg, an analyst at Cowen & Co., said in a note. “We see it as a public warning to the White House that progressive support for Calhoun is not guaranteed.”

The White House has faced pressure to follow through on a promise to make the federal workforce more representative of the nation’s diversity. In her statement, Waters highlighted Thompson’s work to make housing more affordable and equitable.

“It is in part due to the past and ongoing lack of representation of people of color in the senior ranks of our financial services regulators that we see stark racial and economic inequities throughout our country,” Waters said in the statement. “We will not find a more qualified, more dedicated, or more deserving public servant than Ms. Thompson to lead the FHFA at this moment in our nation’s history.”

Fannie and Freddie don’t make loans. Instead, they buy mortgages from lenders and package them into bonds, guaranteeing payment to investors even if homeowners default. The companies have been under government control since they nearly collapsed during the 2008 financial crisis.

Either Thompson or Calhoun, if tapped by Biden, would still need to be confirmed by the U.S. Senate, where Democrats only enjoy a thin margin of control.

If nominated, Calhoun could face opposition from some Democrats because of his prior support for some policies related to freeing Fannie Mae and Freddie Mac from government control, according to Cowen’s Seiberg. Calhoun has testified and authored papers over the years about reforming Fannie and Freddie as part of his work at CRL, an advocacy group. Thompson spent eight years as deputy director of the agency’s housing mission and goals division before taking over as acting director. Prior to joining the FHFA, she served in a number of leadership positions at the Federal Deposit Insurance Corp.