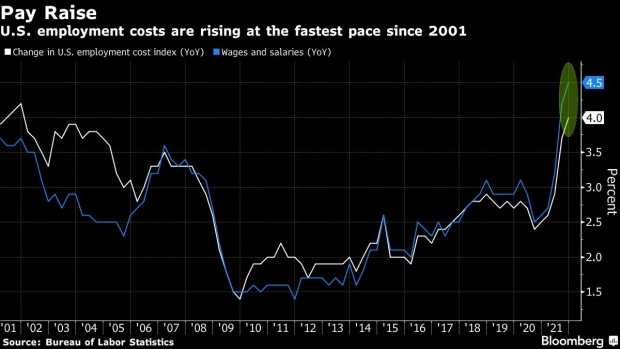 (Bloomberg) -- A slew of U.S. inflation measures out Friday underscored the breadth of price pressures in the economy and reinforced the Federal Reserve’s recent urgency to begin raising interest rates.

The employment cost index, a measure cited by Fed Chair Jerome Powell in December as a key reason for the central bank’s pivot to a more aggressive stance on inflation, rose 4% in the year through December, the most in two decades.

In another sign of mounting inflationary pressure, a separate Commerce Department report Friday showed the personal consumption expenditures price gauge, which the Fed uses for its inflation target, rose 5.8% from a year earlier, the most since 1982.

“Our view of continued upside risks to inflation into 2022 is reaffirmed by late-2021 data, with core PCE inflation continuing to climb and labor costs rising,” Citigroup Inc. economists Veronica Clark and Andrew Hollenhorst said in a note.

The figures show a worsening inflationary environment and come just days after the Fed endorsed plans to raise interest rates in March. Powell also opened the door to more frequent and potentially larger hikes than anticipated, underscoring the challenge the Fed will face this year to keep the broad and sizable price increases from becoming entrenched.

The ECI report “turns the chances of a 50-basis point rate hike in March from a remote possibility to something the FOMC will consider seriously. However, it will take additional inflationary shocks for a 50-basis point hike to become Bloomberg Economics’ central scenario.”

“There’s a risk that the high inflation we’re seeing will be prolonged, and there’s a risk that it will move even higher,” Powell said during a press conference Wednesday. “We have to be in a position with our monetary policy to address all of the plausible outcomes.”

Central bankers also closely watch long-term inflation expectations to ensure that they remain in line with their target.

Another report Friday, from the University of Michigan, showed consumers expect inflation to rise 4.9% over the next year, matching the highest level since 2008. Over the next five to 10 years, Americans see prices rising at an annual rate of 3.1%, the highest since 2011. Even so, Fed officials for the most part have said those expectations haven’t been cause for concern.

But for American families, the rapid price increases have eroded workers’ paychecks and driven up the costs of necessities. Real disposable personal income, or after-tax income adjusted for inflation, fell 0.2% last month, the fifth straight decline.

The decades-high inflation has driven down President Joe Biden’s approval ratings and caused financial hardship for many families.

The higher inflation experienced at the end of 2021 is expected to persist into the first quarter, but economists see price pressures easing as the year goes on. While the Fed’s monetary policy tools are one way of addressing inflation, relieving bottlenecks throughout global supply chains will also play a central role in curbing price pressures.

The persistence of recent inflationary pressures are “importantly related to the evolution of global supply factors such as production or shipping bottlenecks and input prices,” according to a blog post from economists at the New York Fed. “Their global nature and their source (that is, supply as opposed to demand) suggest that domestic monetary policy actions would have only a limited effect on these sources of inflationary pressures.”