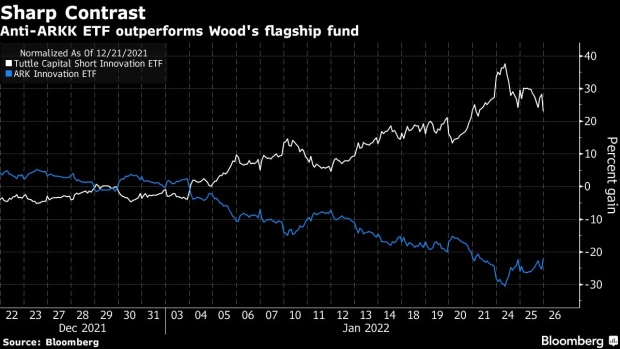 (Bloomberg) -- The stray tweet stood out: Why not start a fund to bet against Cathie Wood, the star investor who’s been stumbling so hard?

“Holy crap, that’s a great idea,” Matthew Tuttle thought when it crossed his feed last year. His fund that wagers against companies that previously merged with SPACs -- another investment craze of the moment -- had been performing well amid signs that the pandemic economy was losing steam. So Tuttle, 53, figured the time was ripe for a bet against Wood.

About a week later, he filed for what would become SARK -- the anti-ARKK ETF -- a fund that wins when Wood’s popular Ark Innovation exchange-traded fund loses.

SARK returned 57% from its Nov. 9 debut through Tuesday, while ARKK has plunged 41%. During that span, investors plowed roughly $298 million into SARK while pulling a net $92 million from Wood’s ETF, according to data compiled by Bloomberg. Tuttle said investors continued pouring money into his fund this week, lifting the total to almost $350 million.

Meanwhile, short interest as a percentage of shares outstanding on ARKK has climbed to a record, approaching 10%, according to data from IHS Markit Ltd. Bets against Wood’s other funds are also near all-time highs.

SARK’s success underscores how quickly even the most successful investors can witness a swing of fortune, especially in a rapidly changing macroeconomic environment. Wood’s steadfast belief in technology’s next big thing has collided with expectations for higher interest rates and less accommodative monetary policy this year.

It also reveals how much can be gained from putting hype near the center of a fund’s strategy -- so much so that a new fund is on the way with a strategy to deliver twice ARKK’s returns.

If Wood had been running a low-key $100 million fund, Tuttle probably wouldn’t have bothered to bet against unprofitable tech, he said. But the same fervent energy that lifted Wood to fame can be recaptured once markets change. And because starting a new fund is relatively easy -- even one that uses swaps contracts to short an actively managed strategy -- Tuttle has managed to win over some one-time Wood disciples who find it more convenient to buy inverse exposure to ARKK than short the fund itself.

Despite ARKK’s recent struggles, Wood remains an influential and highly visible female investor, leading some to question Tuttle’s singular focus on her fund. He claims the focus is merely a result of there being no other unprofitable-tech fund but said Wood’s celebrity made ignoring her success all but impossible.

“I’m not negative on Cathie Wood,” Tuttle said. “This is just a better hedge. If you’re negative on the market, what would you rather be short: Zoom, Teladoc and DocuSign, or Apple, Microsoft and Google?”

For Tuttle, the rotation out of growth stocks and into value that has buoyed his fund is a natural consequence of a more hawkish central bank. From 2009 until last year, markets were operating under the assumption the Fed would intervene if things got bad enough, he said, allowing unprofitable, high-multiple stocks to perform exceptionally well.

ARKK’s holdings were some of the biggest beneficiaries of the monetary and fiscal stimulus doled out during the pandemic. The run-up in richly valued tech shares in 2020 fueled ARKK’s advance of almost 150% that year, vaulting Wood to the top of the ETF market, then valued at about $5.5 trillion. Always-online retail traders and fans of meme stocks and crypto saw the seemingly endless rally personified in Wood, who came to represent an unflinching belief in progress and the promise of disruption.

In 2021, as vaccines rolled out and economies reopened, ARKK began to struggle. Investors dumped speculative tech stocks and started buying names that would benefit from a broader recovery. The fund fell 24% on the year.

The pandemic was a moment of change for Tuttle, too.

It ravaged the adviser network his Greenwich, Connecticut-based firm had relied on, so he shifted his focus to tools for retail investors. Tuttle Capital Management’s biggest fund behind SARK is SPCX, which tracks pre-merger special purpose acquisition companies. It also manages a “fear of missing out” fund -- FOMO -- that responds to buzz while attempting to moderate risks. Tuttle plans to file for 20 new funds in coming weeks, some with strategies that “have never been done before,” he said.

Read more: Meme-Stock ETF Is Now So Dull Manager Says It ‘Puts Me to Sleep’

Now, Tuttle sees a first-quarter drawdown in the offing that will eventually reward value stocks. His FOMO fund is currently in consumer-defensive and utilities stocks, betting on where the market will go rather than hype alone.

“We’re going back to ‘earnings matter,’” he said.