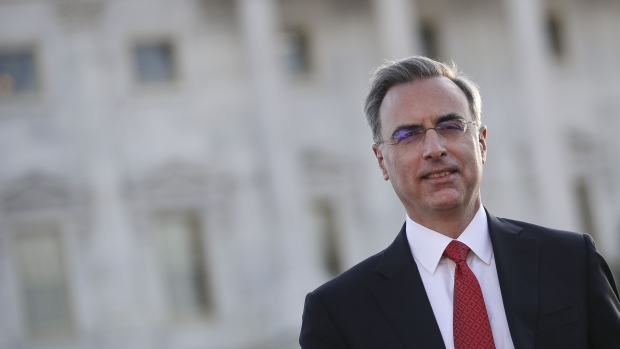 Not the man for this job. , Photographer: Drew Angerer/Getty Images

(Bloomberg Opinion) -- White House counsel Pat Cipollone will reportedly lead the team that represents President Donald Trump in the Senate impeachment trial. Superficially, this may sound logical. The opposite is true. It’s highly problematic for Cipollone to represent Trump in the Senate.

For starters, Cipollone is the author of the letter to executive branch employees directing them not to cooperate with the House’s impeachment inquiry. Cipollone’s Oct. 8 letter told the House of Representatives that its impeachment inquiry was illegitimate and that Trump and the executive branch wouldn’t participate in it. The letter was written “on behalf of” Trump. This letter was widely received as legally preposterous and constitutionally wrong. But that’s not the worst of it. That letter became the basis for the House’s article of impeachment of Trump for obstruction of Congress.

Cipollone’s conduct is therefore directly at issue in the trial. It’s almost as if Rudy Giuliani was representing Trump, despite his involvement in the conduct at issue in the first article of impeachment. (I realize Giuliani is said to be seeking such a role, but it seems obvious that it would be crazy for Trump to allow it.) It’s highly irregular for someone whose actions carried out wrongdoing to represent the person who directed him to take those actions.

The office of the presidency isn’t on trial in the Senate; Donald Trump is on trial. Cipollone’s presence as part of the defense falsely conveys the notion that one part of the government is trying another part, when in fact the Senate trial is focused on Trump as an individual.

The counterargument would be that although the impeachment allegations charge the president with abusing his office, Trump’s defense will be that he acted within the legitimate powers of that office when he asked Ukraine to announce investigations into the Bidens. This defense does implicate the presidency itself, which falls within the White House counsel’s job description.

My own view is that some indirect implication of the powers of the presidency is not reason enough to justify the president using the White House counsel as his personal defense attorney. But regardless, there’s still the more glaring issue: Cipollone should not be representing Trump because of his role in the impeached conduct.

If there were to be witnesses at the Senate trial, Cipollone could easily be one of them. He could be called, for example, to clarify what his letter meant, and whether and how it obstructed Congress. A potential witness should never be representing a defendant, even in a noncriminal case where the only sanction is removal from office.

In an ordinary court case, a lawyer who took part in the conduct at issue would never represent the defendant. Imagine that the president wanted to defend his conduct by saying he mistakenly relied on Cipollone’s legal advice — Cipollone can’t credibly make that argument himself.

Would you want to be represented by the lawyer who got you into trouble in the first place?

To contact the author of this story: Noah Feldman at nfeldman7@bloomberg.net

Noah Feldman is a Bloomberg Opinion columnist. He is a professor of law at Harvard University and was a clerk to U.S. Supreme Court Justice David Souter. His books include “The Three Lives of James Madison: Genius, Partisan, President.”