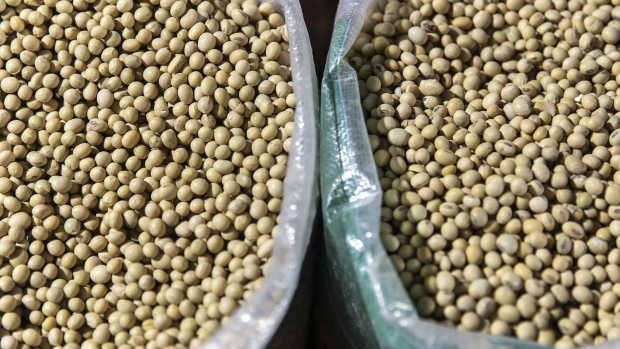 Soybeans are sold at a stall in a wholesale grains market in Shanghai, China, on Tuesday, June 16, 2020. Chinese soy processors need more soybeans for the fourth quarter and early next year as supplies from Brazil taper off seasonally. Photographer: Qilai Shen/Bloomberg , Bloomberg

China is set for a difficult harvest season as a severe energy crunch hurts the outlook for booming production, a development that risks triggering a renewed surge in world agriculture and food prices.

Autumn harvest in the top agricultural producer is underway just as the world’s No. 2 economy faces power shortages in industrial hubs that threaten to slow growth. Among the worst hit are northeastern provinces such as Jilin, Liaoning and Heilongjiang -- where about half of China’s corn and soybeans are grown.

The crisis is stoking concern that China will have a tough time handling crops from corn to soy to peanuts and cotton this year after some plants were asked to suspend or cut output to conserve electricity. Over the past year, the nation imported a record amount of agricultural products due to a domestic shortage, driving prices and global food costs to multiyear highs.

The country needs to ensure sufficient power supply to keep up with expectations for a bumper harvest. “This will affect the supply and prices of agricultural products, which is a matter of importance for the national economy and people’s livelihood,” according to Futures Daily, a state-backed media.

Some companies have bought back-up generators in case of prolonged power cuts, Futures Daily reported, citing traders and producers. Electricity is needed to dry the crops, an important process before storage and sale. Corn and peanut supplies may deteriorate in quality if they’re not processed in time.