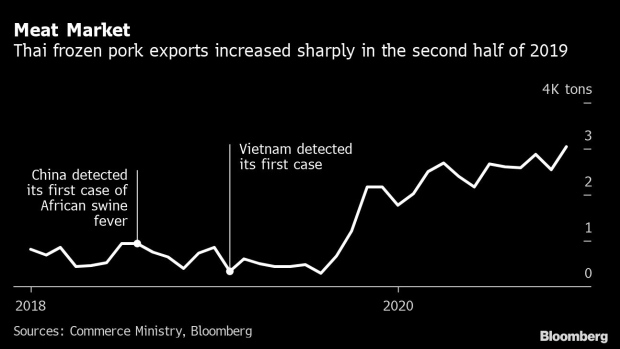 (Bloomberg) -- Thailand’s pork industry is bringing home the bacon after a deadly pig-killing disease wiped out millions of hogs across Asia.

While overall Thai exports fell 6% last year amid the Covid-19 pandemic, exports of live pigs rose 339% in value as Thailand is one of the few Asian countries that hasn’t reported an outbreak of African swine fever. Shipments of chilled, frozen and processed pork were up 69%.

The decline in Thailand’s overall exports, along with a staggering drop in tourism amid the pandemic, pushed the economy to a contraction of 6.1% last year, its worst showing since the Asian financial crisis. The economy is expected to grow 2.5%-3.5% this year, according to the National Economic and Social Development Council.

At just 0.3% of Thailand’s total exports, pig and pork exports weren’t enough to compensate for the declines in other products last year, Phusit Ratanakul Sereroengrit, director-general of the Commerce Ministry’s Trade Policy and Strategy Office, said in an email interview. But Phusit expects shipments of pork and other food products to continue growing this year as the government pushes for Thailand to be “the world’s best quality food producer” and to expand its share of the global food market.

Shipments of food products, which made up 10% of Thailand’s total exports, grew 2% in value last year. This year the ministry aims to increase exports of “future food” such as organic, functional and plant-based foods.

The immediate future, however, may lie in pigs. Since the African swine fever outbreak reached Asia in 2018, more than 6.7 million animals either died from the infection or were culled, according to data from the World Organization for Animal Health. Asia accounted for 82% of all swine losses globally between 2016 and 2020, far surpassing Europe and Africa.

Thai pork exports are expected to continue growing in both volume and value over the next two years until the neighboring countries’ herds return to normal levels, or when vaccines against the fever are widely available, the ministry said.