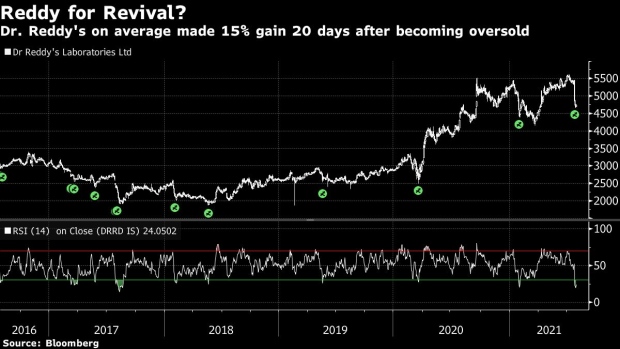 An employee places a cover onto a tray of test tubes containing samples of bacteria at a Bugworks Research India Ltd. laboratory in Bengaluru, India, on Thursday, May 31, 2018. The rapid spread of resistant bacteria has made India the epicenter of a war to prevent a post-antibiotic world, where people would once again die in their thousands of commonplace infections. Faced with this, the Indian government has begun to act, providing early research funding to startups like Bugworks and providing advice and support. Photographer: Samyukta Lakshmi/Bloomberg , Bloomberg

(Bloomberg) -- Dr. Reddy’s Laboratories Ltd., one of India’s largest drug firms, is the nation’s worst-performing stock in July on disappointing earnings and a U.S. probe. But one technical indicator suggests the shares could be due a snap back.

The stock’s relative strength index has dropped to a level indicating the shares are oversold. When that’s happened over the past five years, shares of the Hyderabad-based company have rallied about 15% on average in the 20 subsequent trading sessions, according to data compiled by Bloomberg.

Dr. Reddy’s earnings trailed estimates and the company has disclosed that it’s responding to a subpoena from the U.S. Securities & Exchange Commission. Jefferies India Pvt. analyst Abhishek Sharma, who rates the stock a buy, said in a note the SEC probe “could be material” if it leads to an adverse finding, but shouldn’t affect “our thesis on the company.”

The drug-maker’s shares became oversold 12 times over the past five years based on the relative strength index. In 55% of the cases they traded higher over the next 20 days, according to the data compiled by Bloomberg. In the instances where they were lower, the average loss was just over 6%.