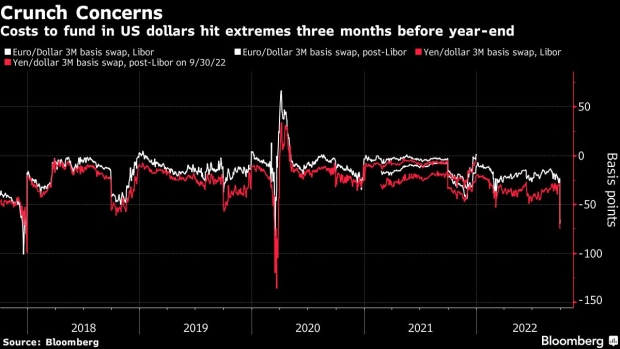 (Bloomberg) -- Funding markets are likely to end the year under stress as banking regulations collide with central-bank tightening and the traditional need to square off positions toward the end of December.

That’s the message from three-month cross-currency basis swaps, which blew out at the end of September to the worst since the pandemic meltdown in 2020. The premium that holders of euros and yen need to pay to swap into dollars jumped as UK financial turmoil and Federal Reserve hawkishness gave a further tailwind to the greenback, with a Bloomberg gauge of the dollar rising to another record last week.

Traders said the turbulence in basis swaps was also closely tied to concern that has been building for months that the wild ride in markets during 2022 will see a more brutal year-end funding crunch than usual. The Fed’s steepest interest-rate hikes since the 1980s are creating strains, but so are Basel III regulatory burdens, including the standardized approach for counter-party credit risk that came into force this year.

“We see the driver as nervousness around US banks’ ability to lend dollars over the turn, given pressures created by key Basel III regulations,” said Mitchell Grosser, head of trading at Commonwealth Bank of Australia in Sydney. “In the past, when we have seen these type of regulatory changes, we have seen disruption on year-end funding,” he said, citing rules on globally systemic banks and liquidity coverage ratios.

Three-month euro-dollar basis swaps slid 41 basis points last week as they started to capture the year-end period. They touched minus 70 basis points, the lowest since traders switched to the current benchmarks from Libor in early 2021. The previous gauge fell to a low of minus 129 during the height of the pandemic market selloff in March 2020.

Concern a scarcity of high-quality liquid assets for collateral will bedevil the traditionally stressful year-end period have been brewing for some time, Commonwealth Bank’s Grosser said.

The six-month euro-dollar basis swap tumbled at the end of June to fall well below the three-month gauge, before last week’s decline in the shorter-maturity swap put it the most below the longer tenor since the start of the post-Libor era.

“Things could get worse in the next few months,” said Antoine Bouvet, a rates strategist at ING. “If the European Central Bank goes ahead with QT or if they fiddle with reserve remuneration, we see credit premium rising and this would contribute to a wider basis.”

Investors have become increasingly concerned rapid central-bank tightening is sucking out liquidity from global bond markets and exacerbating turbulence in US Treasuries and other traditional havens to turbocharge the turmoil blighting a range of assets this year.