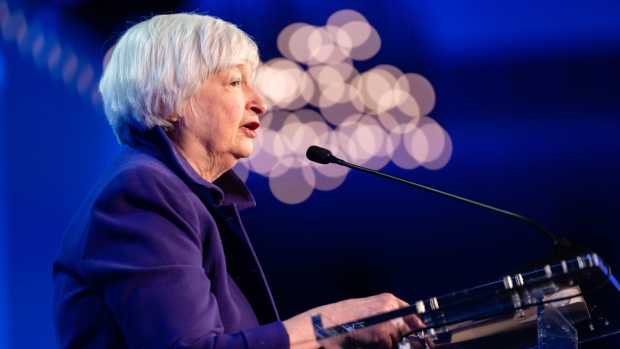 (Bloomberg) -- Treasury Secretary Janet Yellen declined to offer a new forecast on inflation for the end of 2022 as she acknowledged that fallout from Russia’s invasion of Ukraine would worsen price rises, which just hit another 40-year high in February.

“I think there’s a lot of uncertainty that is related to what’s going on with Russia and Ukraine,” Yellen said Thursday in an interview with CNBC television. “I do think it’s exacerbating inflation.”

While Americans are facing the consequences of tough sanctions action against Russia, Yellen said the price won’t be so high as an economic downturn.

“We’ve got a good strong economy with an excellent outlook for the labor market and real activity going forward. Inflation is a problem, and it’s one that we need to address, but I don’t expect a recession in the United States,” the Treasury secretary said.

Yellen had predicted in early February -- well before Russia’s military offensive began -- that inflation in the U.S. would drop to around 3% on a year-over-year basis by the end of 2022.

“I don’t want to make a prediction exactly as to what’s going to happen in the second half of the year,” she said Thursday. “We’re likely to see another year in which 12-month inflation numbers remain very uncomfortably high.”

Yellen also said she believed that the Federal Reserve could achieve a “soft landing” for the economy -- taming inflation without triggering a recession.

“I have confidence in their ability to make a meaningful difference,” she said of Fed policy makers, who have signaled they will start raising interest rates next week.