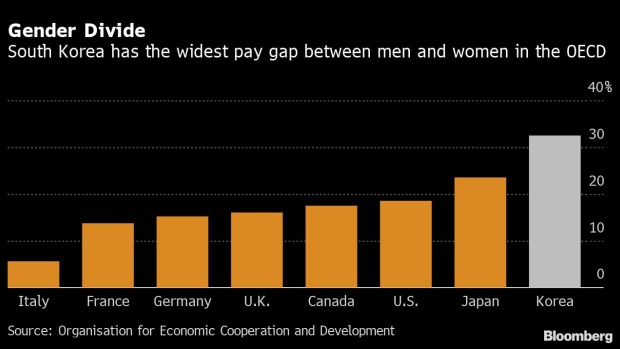 (Bloomberg) -- For decades, Seoul Central Market, with its shabby shops and grungy street food, has been a gathering place for retirees seeking cheap meals, clothing and kitchenware.

These days, they’re increasingly competing for space with hipsters in heels and Birkenstocks who troll chic restaurants and cafes sprouting between hole-in-the-wall rice shops and noodle joints. Aspiring chefs and first-time business owners — some who gave up seeking jobs in South Korea’s sprawling family-run conglomerates like Samsung Electronics Co. Ltd. — are driving up rents and remaking the neighborhood into a battleground in a generational feud.

The older side is resentful of the new residents, arguing that they’re relatively well off thanks largely to the hard work and thrift of those that powered the country’s rise after the Korean War. The younger crowd, meanwhile, blames their forebearers for making homeownership unrealistic and producing the rigged rat race depicted in Korean-made dramas such as “Squid Game” and “Parasite.”

“The more I see these punks, the more I’m worried about the future of this country,” said Lee Young-jae, 78, who has run a second-hand kitchen equipment store since the early 1980s, when the country began its march to becoming the world’s 10th-largest economy. “They complain our society’s unfair, but life is unfair — get used to it! All they do is complain about the system without being willing to appreciate anything they got.”

Just a few yards away, 33-year-old communication industry employee Choe Eun-byeol batted away Lee’s complaints between sips of an iced latte in a glitzy cafe that once was a run-down rice store.

“That’s complete nonsense,” she said. “In his day, people could afford a house, get prestigious jobs if you studied and worked hard. Now that’s only in history books.”

Choe is part of South Korea’s MZ generation -- the 30-something Millennials and 20-something Gen Zers -- who argue the social and economic divides are getting worse. Some MZers mockingly call themselves the “give-up generation” and deride their own country as “Hell Joseon,” a reference to a dynasty that reigned on the peninsula for half a millennium.

While it’s a complaint with echoes across the globe as loose monetary policies and, more, recently a pandemic-driven rush for real estate, push up home prices, the disputes in South Korea have been particularly sharp. Some 90% of adults say there are strong conflicts between supporters of different political parties, tied with the U.S. for the highest rate among 17 advanced economies surveyed, according to Pew Research released this week.

But traditional loyalties may be eroding ahead of a March election to replace President Moon Jae-in, 68, whose term has been marked by a heated debates over everything from rising rents and institutionalized favoritism to sexual harassment of women to the mandatory military service of men. Both Moon’s left-leaning Democratic Party and the conservative opposition have been embracing populist slogans to appeal to the disaffected.

South Korea has a poverty rate  of 16.7%, fourth among the 38 members of the Organisation for Economic Cooperation and Development. It has the highest wage gap between men and women, at 32.5%.

Home prices in the greater Seoul area — where half of the country’s almost 52 million people live — have doubled over the past five years, swamping a 20% increase in wages. While the unemployment rate is about 4% overall, it’s more than double that for workers under 30.

“The reality today is just brutal,” Choe said. “No matter how hard you work, it’s impossible to afford a house in Seoul. And it’s just too difficult to get a decent job, even if you are a graduate of a top university.”

Such stresses have been detailed by movies like the Academy Award-winning “Parasite,” which tells the story of a poor family whose members scheme to secure jobs in a wealthy household by inflating their qualifications and pretending they’re not related. “Squid Game” similarly follows more than 400 deeply indebted people who play a series of deadly children’s games to win a fortune for the amusement of a few super-rich VIPs.

Some younger voters who helped Moon oust conservative President Park Geun-hye amid a corruption scandal have grown frustrated with his failure to narrow the divides. Moon was seen as a quintessential “586er” — those who went to college in the 1980s and were in their 50s when the term was coined. It’s a generation that rebelled against authoritarian rule, brought about democratic elections and came to dominate Korean society.

The former human rights activist also promised to root out self-dealing between the government and the powerful “chaebol” conglomerates. Instead, Moon’s corporate reforms stalled and his administration has also been shaken by abuse-of-power scandals, including allegations the then-justice minister used his influence to get his children into prestigious universities.

The controversies have undermined the DP’s once-reliable support among younger voters, who have instead warmed to the right-leaning opposition, which has rebranded itself as the People Power Party. A Realmeter survey released last week showed the PPP was favored by South Koreans in their 20s and 30s, as well as the bloc’s traditional base among voters in their 60s and 70s.

“Fundamentally, it’s not a problem of generational clash,” said Shin Yul, a political science professor at Myongji University in Seoul. “The real problem is that many people, including older generations, apart from the progressive 586ers, think that our society is not fair, only favoring those 586s in power.”

Earlier this month, Gyeonggi Governor Lee Jae-myung — who has promised a “universal basic income” of 500,000 won ($420) a month — defeated a Moon ally to secure the party’s nomination to run for president. Lee Jae-myung, 56, said after his victory that he would launch real estate reforms to rein in housing prices and tackle corruption, promising to make the country more equal.

But even his bid has been clouded a scandal involving one of his associates who made profits on a land deal. The PPP has called for an independent counsel to investigate.

The PPP, meanwhile, picked a 36-year-old Harvard University graduate with little political experience as its leader. The elevation of Lee Jun-seok, who never served in parliament, is seen appealing to a disgruntled faction of the MZ generation.

“I am pretty confident that they are actually looking forward to the next presidential election coming up in March — they believe that they can change the nation,” Lee Jun-seok told Bloomberg News in July, adding that many younger voters believe the current system favors the rich and connected. He has called for “qualification tests” to gauge would-be lawmakers’ ability to use computer programs — a proposal some view as a slight against the “586ers.”

Lee Do-yeah, a 58-year-old social welfare worker, said she had little sympathy for the MZ generation. Her criticism echoed the generational divides emerging across the globe.

“The younger generations these days are too individualistic,” said Lee, who lives in Chungcheong province, which is expected to be a key election battleground. “They put their own personal interests over that of community’s, and leave their jobs too easily when they think their interests are compromised.”

Many in the MZ generation are choosing to forgo marriage, having children and buying homes. Those like Choe in Seoul Central Market argue it makes more sense to just focus on taking care of themselves.

“I’m skeptical that the next president of this country — whoever that is, no matter which party he represents — would be able to fix this problem,” she said. “But I expect him or her to be at least more sympathetic and try to make our society a bit fairer than now. I’m going to vote for someone who’s willing to fight for that fairness.”