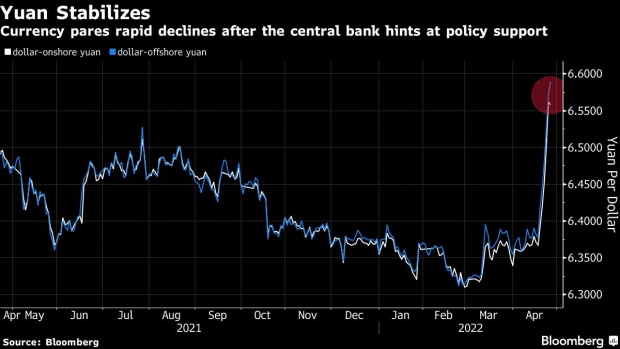 (Bloomberg) -- The yuan’s sudden slide will gather pace over the next few months as markets price in a worsening outcome for the Covid-stricken economy, analysts say.

Analysts from Credit Agricole CIB, Standard Chartered Bank Plc., BNP Paribas SA, and HSBC Bank Plc slashed their forecasts as the yuan plunged more than 3% this month. A separate survey of 11 traders and analysts by Bloomberg expect it to drop to 6.7 per dollar in three months, about 2% weaker than current levels.

The turnaround, just months after China sought to tame yuan strength, comes as Covid-lockdowns fanned fears that the nation will miss its economic target with even the capital Beijing battling an outbreak. While the central bank and policymakers have pledged to step up support, Chinese markets are tumbling to raise the specter of accelerating capital outflows.

“I don’t think this is an end to recent yuan depreciation,” said Bo Zhuang, senior sovereign analyst at Loomis Sayles Investments Asia in Singapore, who raised concerns of a possible hard landing should a lockdown grip Beijing. He forecasts the yuan weakening to 6.85 per dollar this year, with a potential to hit 7 next year.

Morgan Stanley and other banks have cut their China growth forecasts to below the official projection of 5.5% for the year. Early indicators compiled by Bloomberg show domestic demand worsened in April while business confidence also plunged.

Onshore yuan has dropped almost 1% this week to 6.5571 a dollar on Wednesday while the offshore yuan fell 1% over the same period to 6.5891.

HSBC and BNP Paribas now see the yuan falling to 6.60 per dollar by end-June, while Standard Chartered and Credit Agricole forecast it at 6.70. Bank of America Corp. and TD Securities see the currency falling to 6.80 by year-end on worsening terms of trade. At the end of March, analysts surveyed by Bloomberg expected the currency to be at around 6.38 by the end of the second quarter.

“The yuan’s outlook is heavily dependent on the evolving Covid and growth situation in China,” said Alvin Tan, head of Asia currency strategy at the Royal Bank of Canada in Hong Kong, “It makes sense to use controlled currency depreciation as a relief valve for the economy if growth risks were to escalate.”

The PBOC’s measured approach toward supporting the yuan is also evident from its restraint in using the daily reference rate as a signaling tool. The fixing in recent sessions have been broadly in line with estimates. On Monday, the central bank cut the amount of money that banks need to have in reserve for foreign currency holdings to increase yuan liquidity.

“I prefer to view the PBOC moves as managing exchange rate volatility rather than targeting an exchange rate level or view them as attempts to reverse a trend,” said Philip Wee, senior foreign exchange strategist at DBS Bank Ltd in Singapore

The PBOC has various tools at its disposal to boost the yuan. It could use currency fixing, squeeze offshore yuan shorting costs and further cut the reserve requirement for foreign currencies, according to the Bloomberg survey participants.

The central bank could also limit foreign outflows and foreign currency purchases onshore, said the traders and analysts who asked not to be identified as they aren’t authorized to speak publicly.