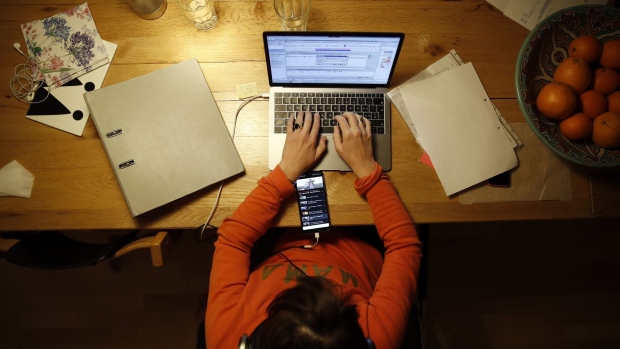 A woman works at a laptop computer at home in an arranged photograph taken in Bern, Switzerland, on Wednesday, April 1, 2020. The Covid-19 pandemic has triggered a seismic wave of health awareness and anxiety, which is energizing a new category of virus-fighting tech and apps. Photographer: Stefan Wermuth/Bloomberg , Bloomberg

Zoom, one of the few success stories of the COVID-19 pandemic, now faces a new competitor in an app backed by Asia’s wealthiest person Mukesh Ambani.

Ambani’s Reliance Industries Ltd., which has scored billions of dollars of investments from Facebook Inc. to Intel Corp. for its digital businesses, has launched the JioMeet video conferencing app after beta testing.

The app has already garnered more than 100,000 downloads on the Google Play Store after becoming available Thursday evening.

India’s financial capital went to the polls today with billionaires, celebrities and slum dwellers among those lining up to elect lawmakers they hope will fix Mumbai’s crumbling and stretched infrastructure.

Like Google Meet, Microsoft Teams and other services, JioMeet offers unlimited high-definition calls -- but unlike Zoom, it doesn’t impose a 40-minute time limit. Calls can go on as long as 24 hours, and all meetings are encrypted and password-protected, the company said on the JioMeet website.

The launch coincided with a nationwide ban on dozens of popular apps from Chinese technology giants including ByteDance Ltd.’s TikTok and Alibaba Group Holding Ltd.’s UC Web, on grounds they threatened security and data privacy. JioMeet went viral Friday on social media alongside the hashtag #MadeinIndia.

The app is one facet of Ambani’s rapidly expanding digital empire, which includes India’s largest telecom operator with nearly 400 million users. On Friday, Reliance announced Intel Capital has invested US$253 million into Jio Platforms Ltd., a unit of Ambani’s oil-to-retail conglomerate. The U.S. chipmaker’s arm is the 11th investor in about as many weeks to announce its backing for the digital services platform, which has now raised about 1.2 trillion rupees (US$15.7 billion).

“JioMeet will be a very credible disruptor in the space,” said Utkarsh Sinha, managing director of boutique consultancy Bexley Advisors. “Just the fact that it has no time limits on calls makes it a serious challenger to Zoom, despite its entrenchment.”

Jio Platforms is amassing a wide range of services from music streaming to online retail and payments, fast turning into an ecommerce juggernaut that can take on Alphabet Inc.’s Google and Amazon.com Inc on its own home turf. Like elsewhere, video conferencing apps have become lifelines for millions of Indians working in cramped homes during COVID-19 lockdowns.

JioMeet is also debuting at a time Zoom users have accused the service of security flaws. It’s been accused of siding with China after deactivating accounts of pro-democracy activists in the U.S and Hong Kong, which it said was intended to comply with Chinese law.

--With assistance from P R Sanjai.