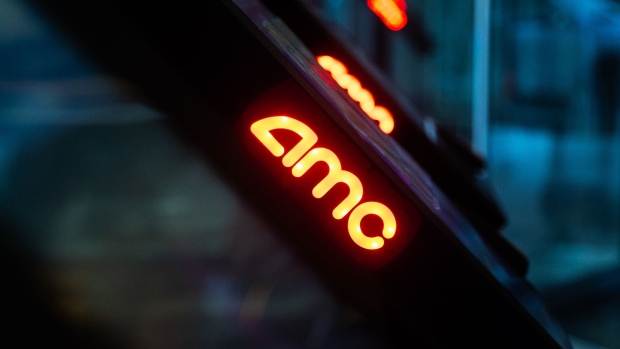 Signage on a kiosk machine at the AMC Lincoln Square 13 movie theater in New York, U.S., on Thursday, June 10, 2021. More board members at AMC Entertainment Holdings Inc. are rushing to lock in gains from the movie-theater giant's Reddit-fueled stock surge, making another wave of sales this week. Photographer: Jeenah Moon/Bloomberg , Bloomberg

(Bloomberg) -- To get ahead this year, distressed investors found themselves looking at increasingly unusual opportunities for returns, a trend that’s set to continue in 2022.

“Money is out there, and it has to be put to work,” said Thad Wilson, a restructuring partner at King & Spalding. “But there are fewer options in which to put it to work that make economic sense, so people start betting on riskier and riskier and riskier debt instruments and alternative investments. Some of those may ultimately end up in bankruptcy.”

Blame year two of the pandemic, when the steady flow of government stimulus and central bank liquidity ignited investments across asset classes. The pile of traded distressed bonds and loans was sitting at just $66 billion as of last week, and an index of troubled U.S. bonds is up nearly 21% for the year through Wednesday.

Remember it all? Here, Bloomberg recaps the deals that were make-or-break for investors this year, and what they tell us about what to expect in 2022.

The story of Hertz might as well encapsulate the credit markets in the first half of the year.

Felled by the sudden lack of demand for travel in the early days of the pandemic, the rental car company became an early meme stock sensation. Later, when travel demand rebounded and the chip shortage sent used car values soaring, the company became the target of dueling takeover bids out of bankruptcy.

The end result? Its exit handed healthy returns to even equity holders that are typically wiped out in a restructuring -- challenging the precedent for distressed investors that specialize in gaming out bankruptcy scenarios.

The deal gave wins to Apollo Global Management Inc., Knighthead Capital Management and Certares Management, and of course the retail renegades over on Reddit. Hertz raised $1.3 billion in a stock listing in October, handing profits to selling shareholders including Cougar Capital and Oaktree Capital Management.

After enduring a punishing bankruptcy wave in 2020, companies that cut debt in court or managed to avoid filings altogether entered 2021 willing to make overdue changes, adopt new e-commerce technology and embrace new business models, which seemed to pay off: an index of high-yield retailer debt jumped 6.6% this year through Tuesday, besting the broader market’s 5.3% return.

Supply chain disruptions turned out to be a blessing for some chains, which like Hertz saw sky-high demand and were able to reduce discounts. Selling at full price boosts borrowing limits on the asset-based loans that power most retailers, so they’re ending this year with in surprisingly good shape, said Perry Mandarino, co-head of investment banking at B. Riley Financial Inc.

“Retailers are flush with cash and possibly the best performing sector at this point,” said Mandarino. “This might be the first January in a long time you don’t see the typical post-holiday spike in retail bankruptcies.”

Citigroup Inc.’s $900 million back-office payment blunder looked even worse this year when efforts to recoup the funds in court failed.

The surprise ruling is on its face a victory for the funds including Brigade Capital Management, HPS Investment Partners and Symphony Asset Management, which received the mistaken Revlon Inc. loan payment and took the matter to court instead of returning the money, but the funds later found themselves shut out of the bank’s debt deals, illustrating the power major banks like Citi still wield in the credit markets.

Meanwhile, Citi appealed the decision in Manhattan federal court, and it awaits a ruling. For now, the bungle has left the bank as one of Revlon’s biggest creditors. The cosmetics company has seen its earnings improve from 2020 lows, though its debt remains deeply distressed.

China Evergrande Group’s construction delays in September spiraled into a major crisis by December, with stress spreading to other Chinese developers. Evergrande and Kaisa Group Holdings Ltd., two giants of the dollar bond market, defaulted on debt payments, while other peers fell in sympathy.

While exact next steps are unknown, U.S.-based distressed investing heavyweights risk being placed near the bottom of a priority list that includes homeowners, employees, individual investors, suppliers and Chinese banks.

The saga of Purdue Pharma LP came to a stunning crescendo this month that threw the contours of future bankruptcy deals into doubt. A federal judge in New York struck down the OxyContin maker’s multi-billion dollar opioid settlement, wherein its billionaire owners would pledge more than $4 billion and be immune from current and future civil opioid lawsuits.

In her ruling, U.S. District Judge Colleen McMahon said bankruptcy courts don’t have the authority to grant those kinds of releases.

The decision is key for distressed investors because it turns on a long-controversial piece of the bankruptcy process -- so-called third-party releases, which insulate non-bankrupt parties from related litigation whether all creditors agree to it or not, and act as a strong incentive to bring parties to the negotiating table.

Purdue has said it will appeal the decision.