The stalwarts of Canada’s equity market might be losing their shine and in turn, hampering what could have been an even bigger rally for the nation’s stocks this year.

Financial stocks, which include banks, insurers and asset managers, make up more than 30 per cent of the S&P/TSX Composite Index and have lagged the record-breaking surge on the benchmark in 2019 -- that’s only happened for the second time in nine years, according to data compiled by Bloomberg.

Canadian stocks have rallied 16 per cent this year, joining their U.S. counterparts even as global markets have been roiled by trade tensions and geopolitical risks. Profit expectations have hit a record high on an expanding economy, stronger commodity prices and the most recent solid earnings season.

While the surge in tech stocks, materials and utilities have helped push the benchmark index higher, the heavy contribution from financials has thwarted an even bigger pop. 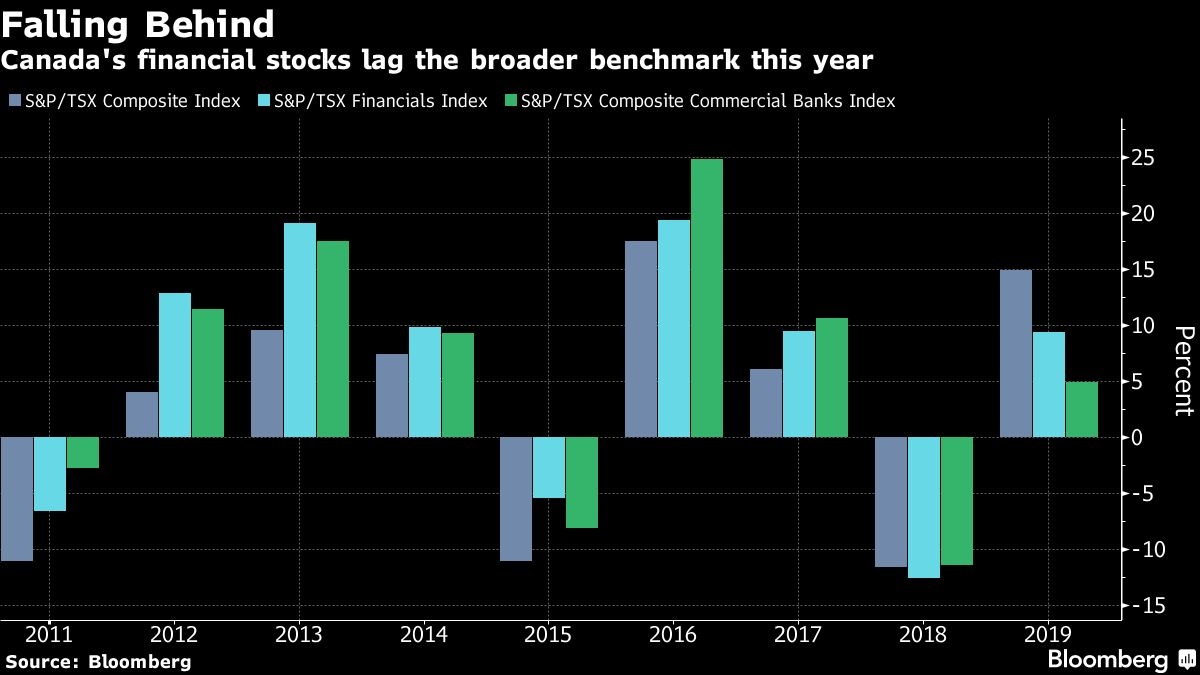 The dividend-heavy S&P/TSX Composite Financials Index has climbed 14 per cent this year on a total-returns basis, while the main stocks gauge soared 18 per cent. Eight of the largest Canadian lenders -- which contribute about 20% of the benchmark -- have risen only about nine per cent this year.

“So when we see a flatter inverted yield curve, as we do now in many different markets including Canada, I think that’s a bit of a concern for financials,” Colin Stewart, portfolio manager and co-founder of JC Clark Ltd. said on BNN Bloomberg TV.

Banks have been weathering a difficult year. Growth has slowed in areas such as domestic mortgages with rising loan-loss provisions and costs eroding earnings, while threats of trade wars and Brexit have contributed to market volatility that’s hampering dealmaking globally.

Declining interest rates also threatening net interest margins -- the difference between what a bank charges for loans and pays for deposits.

“Ninety percent of the time, they perform fairly well and you want to own them,” said Nigel D’Souza, an analyst at Veritas Investment Research Corp. said by phone. “But there’s a portion of time, once or twice in every decade where they don’t perform well and those are usually conditions of slowing economic growth and rising credit losses or elevated credit risk.” D’Souza went underweight on Canadian banks in March of this year. The financials sub-gauge has gained a mere 1.3% since the end of March.

Why do retail and institution investors chose to invest in Canadian banks?

“None of the Big 5 banks have ever cut their dividend and that gives you a comfort that they never will,” CIBC Capital Markets analyst Robert Sedran agrees. “You never say never, but at least that’s in the mindset.”

Still, Canadian bank shares are more expensive than those of U.S. lenders, having fetched a premium over the American banks for 13 years. The Canadian banks index is trading at about two times tangible book value per share versus 1.5 times for the KBW Index of U.S. lenders. 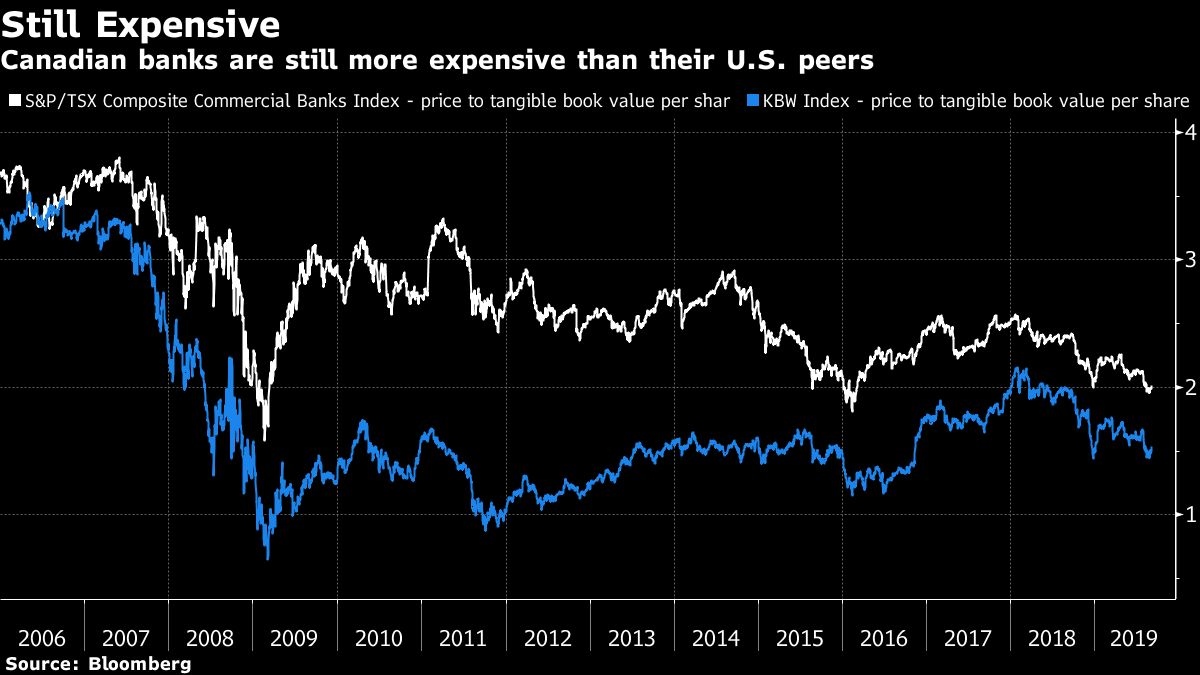 The question then becomes whether investors are in for the long haul.