The meteoric surge of pot ETFs is prompting one mutual fund to join the list of those seeking to tap into the abundance of cash flowing into the US$6 trillion exchange-traded fund industry.

Hopes for cannabis legalization in the U.S. have fueled bets on massive profit growth and propelled ETFs tracking the sector to the top of the leaderboard this year. That’s encouraged Foothill Capital Management’s Cannabis Growth Fund (ticker CANNX) to file plans to convert into an ETF. The product has only garnered US$7.4 million in assets since its 2019 start -- despite a surge of almost 250 per cent in the past year. That compares with the US$1.9 billion for the ETFMG Alternative Harvest ETF (ticker MJ), the largest pot ETF.

The conversions would be a milestone moment for the ETF industry, which has been gaining ground on the mutual-fund market for years thanks to lower costs, easier access and a preferable tax regime. Guinness Atkinson Asset Management is slated to switch two of its products to ETFs on March 26, and Dimensional Fund Advisors has also filed plans to convert some of its funds. Now with Foothill’s Cannabis Growth joining the lineup, several analysts say that could attract more investor attention. 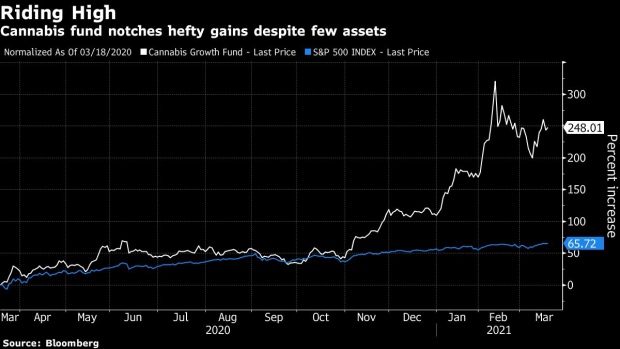 “For some managers, this is a way to list ETFs, to get into the ETF market with hundreds of millions or billions of dollars behind you on day one,” said Ryan Sullivan, senior vice-president of Brown Brothers Harriman’s global ETF services. “We’ll see it happen for the first time in the near future.”

Active managers such as those three firms filing for conversions could bring in US$100 billion in new assets to the ETF industry, according to Bloomberg Intelligence.

Meanwhile, pot ETFs have lured US$1.7 billion in 2021, blowing past 2020’s total of US$686 million. That rush of cash is likely chasing the surge in the industry’s stocks, with the list of 10 best-performing ETFs this year currently including three cannabis products -- the Global X Cannabis ETF (POTX), the Cannabis ETF (THCX) and Amplify Seymour Cannabis ETF (CNBS).

Since California legalized medical marijuana in 1996, there’s been growing state-by-state acceptance of the plant and its derivatives. Canada legalized pot in 2018, creating an industry dominated by companies that have listed on U.S. exchanges, enticing American investors. Hopes for legalization on both the state and federal levels are boosting the cannabis market and unleashing a wave of mergers and acquisitions, while a Democratic majority in Congress is fueling optimism of more widespread approval measures.

“It feels as if this administration is probably more pro-legalization,” said Arthur Hogan, chief market strategist at National Securities Corp. “It’s not just, will all states have some type of legalization, but will there likely be a federal legalization? That would certainly smooth everything out.”