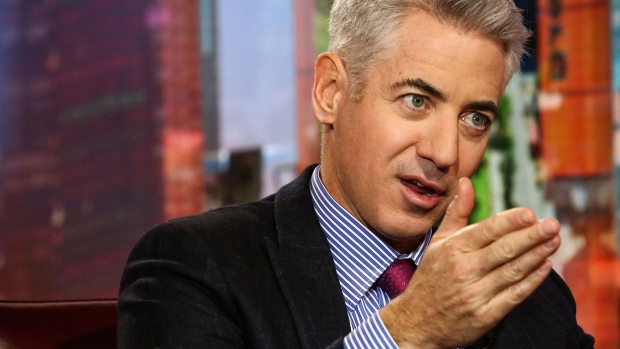 Bill Ackman is putting a modern-day spin on a centuries-old financial innovation with the special purpose acquisition company he plans to take public.

His new SPAC — Pershing Square Tontine Holdings Ltd. — will reward investors who hang on to their shares after an acquisition is selected by giving them a fixed number of warrants. When shareholders cash out, those who remain receive more warrants, giving them an incentive to stay.

A traditional “tontine” was part annuity and part mortality lottery. Members formed a pool of assets and agreed to share in the resulting income for the rest of their lives. As time passed and people died, the number of those entitled to the income shrank, giving survivors a bigger cut. It’s named after Lorenzo de Tonti, an Italian financier who proposed the concept to the French government in 1653.

Today, supporters of such structures say they’re misunderstood and due for a renaissance.

“The popular perception is that there’s something crass about profiting off other people dying,” said Gal Wettstein, an economist at the Center for Retirement Research at Boston College.

Ackman’s SPAC seeks to raise as much as US$6.45 billion through an initial public offering combined with a commitment from the billionaire’s hedge fund. The new company didn’t specify what sectors it will target, according to a June 22 regulatory filing.

It would be the largest SPAC ever, underscoring the growing popularity of such vehicles, with more than US$16.5 billion of announced deals so far this year in the U.S., according to data compiled by Bloomberg. Pershing Square was also a sponsor of a 2011 SPAC, Justice Holdings Ltd., that brought the Burger King restaurant chain back to the public markets.

Ackman has had a strong year so far. His hedge fund earned US$2.6 billion shorting credit markets in March, before shifting to a recovery bet. It gained 29 per cent in the first half of the year.

Read more: Ackman’s Blank Check Company Could Raise Up to US$6.45 Billion

The tontine’s simplicity makes it an affordable alternative to annuities and could be a useful addition to the retirement market, Wettstein said. The World Economic Forum estimates that the global retirement savings gap was US$70 trillion in 2015 and will reach US$400 trillion by 2050 if steps aren’t taken to encourage more saving.

Pop culture has contributed to the morbid perception of tontines. Books by Robert Louis Stevenson and Agatha Christie, as well as television shows like “The Simpsons” and “Archer,” feature tontine storylines. In these constructions, tontines include just a few members who plot to murder one another so that the sole survivor gets everything.

But that’s not representative of how the structures were meant to work. Governments in Europe originally used them to fund war debt. Investors paid to join and then received a share of a fixed government payout that continued until the last member died. It was a useful retirement tool because the longer an investor lived the more income she received.

“In the real world, you wouldn’t know who the other members are,” said Richard Fullmer, founder of Nuova Longevita Research, a consulting firm that specializes in tontines. “You’d have the pool as big as possible, so it wouldn’t make any difference at all if you killed somebody.”

The structures were once prevalent in the U.S. — the Tontine Coffee House on Wall Street, precursor to the New York Stock Exchange, was financed by a tontine. Alexander Hamilton proposed their use for repaying Revolutionary War debt. By the beginning of the 20th century, some research estimates as much as 7.5 per cent of U.S. wealth was held in tontine insurance structures.

But in 1905, a New York State commission recommended prohibiting what were then the most prevalent forms of tontine after mismanagement and corruption generated consumer losses and complaints. The structures soon disappeared from the American marketplace.

Fullmer said he thinks now is the time for a revival. The tontine provides a middle ground between annuities, which offer guaranteed income but are more expensive because they need to cover the risk that members live longer than expected, and ordinary investment income, which doesn’t offer a mortality premium — essentially a gain for outliving other members.

“Tontines can be priced very transparently” when compared with annuities, Fullmer said. “On average, you expect to get more out of the tontine for the simple reason that it doesn’t have an embedded guarantee.”

Modern theorists have also developed payout models that retain the cost advantages of tontines while providing more money throughout a typical member’s lifetime, instead of being heavily back-loaded.

Barriers to widespread acceptance remain, but that may be changing. The Pan-European Personal Pension Product, a legal framework for promoting new pension products across the Continent, will allow more providers to offer consumers tontine-like structures. As for the U.S., Fullmer said the subject has evolved from predominantly academic discussions to real corporate deliberations.

Ultimately the biggest obstacle might be cultural. Some have proposed changing the name to distance the product from its popular associations — which, Fullmer said, are undeserved.

“I’m not aware of anyone actually having committed a murder to profit from a tontine.”