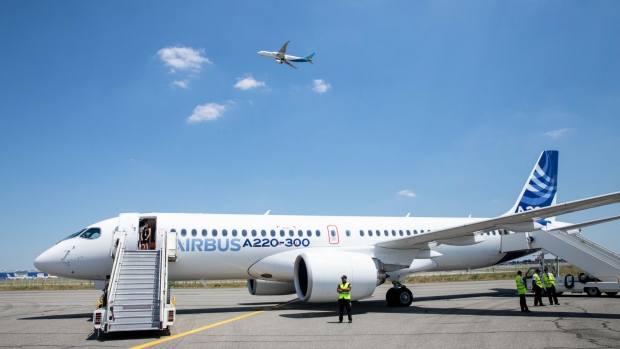 A new Airbus A220-300 single-aisle aircraft stands on the tarmac in Toulouse. Photographer: Christophe Morin/Bloomberg , Bloomberg

Airbus SE will enhance the capabilities of the A220 single-aisle jet it acquired last year from Bombardier Inc. (BBDb.TO) in a bid to challenge Boeing Co. by opening up potential new routes.

Airbus will boost the range of the former C Series plane by about 450 nautical miles, sales chief Christian Scherer said Tuesday in a briefing at the European planemaker’s base in Toulouse, France. That will permit new services from Western Europe to the Middle East and between Southeast Asia and Australia.

While the European planemaker inherited an order book of more than 530 aircraft when it took over the A220 in July, it’s seeking a slew of new contracts as it focuses its own sales force on the program. Airbus is also preparing to add an assembly line in Alabama to Bombardier’s original plant in Montreal in an effort to lower production costs with higher volumes.

The improved plane, with a range of 3,400 miles for the baseline A220-100 and 50 miles more for the bigger -300 variant, will be available from the second half of next year. The maximum takeoff weight will increase by 2.3 metric tons, but no additional fuel tanks are required, Airbus said.

Scherer said a regulatory cooperation deal between Europe and China reached this week will start the process of getting the A220 certificated for the Asian nation. Sales have also been hindered in the U.S., where the threat of tariffs over alleged Airbus subsidies is hurting demand among local carriers, he said.

Bombardier bet more than US$6 billion to develop the A220 over more than a decade. Airbus said the enhancements could help the model win the lion’s share of the 100- to 150-seat aircraft market, which it puts at 7,000 planes over the next two decades.

The A220’s capacity means it sits mainly below the smallest versions of the Airbus A320 and Boeing 737 families. The extended range should make it more competitive on longer routes where demand is insufficient to support the bigger planes.

Scherer said it’s too early to reach any conclusions about whether a bigger A220-500 plane might be built.