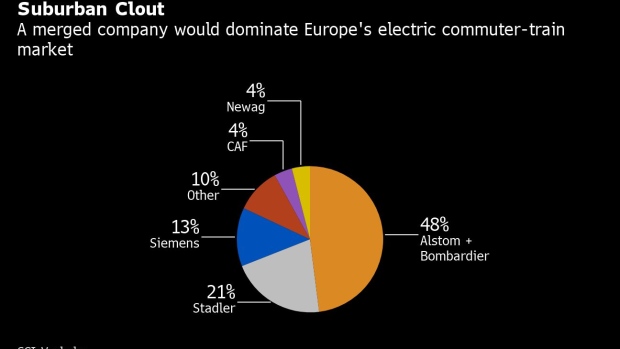 A TGV Avelia Euroduplex high-speed train carriage stands on the assembly line inside the Alstom SA factory in Aytre, France, on Monday, Oct. 15, 2018. The French economy may be in line for a bigger rebound than initially estimated, with the central bank revising up its prediction for growth in the third quarter. Photographer: Marlene Awaad/Bloomberg , Bloomberg

(Bloomberg) -- French Finance Minister Bruno Le Maire met frequently with European Union Competition Commissioner Margrethe Vestager last year as he tried to save Siemens AG proposed merger with Alstom SA. Despite her decision to block the deal, he may be seeing her even more now.

The 50-year-old politician made the journey to Brussels again Tuesday, hours after Alstom announced plans to purchase Bombardier Inc.’s rail unit for as much as 6.2 billion euros ($6.7 billion). While Le Maire openly called Vestager’s decision a “mistake” last year, he was trying to put a better face on his latest sit-down with the top EU deals regulator.

He described the talks as “very good” and emphasized that the latest deal would strengthen “the European rail industry.” The EU’s press office merely said Le Maire had “explained his views on the announced Alstom-Bombardier transaction.”

Company executives recognize that they can’t make the same mistakes that derailed the Siemens deal or their plan to create the world’s No. 2 maker of rail equipment may end up in the same place. Bombardier Chief Executive Officer Alain Bellemare said on a Monday call with an analysts that assessing the antitrust risks was a crucial concern and that the companies have “very minimal overlap.” He flagged that the companies are willing offer so-called remedies, or concessions, to allay any antitrust concerns.

A year ago, Le Maire was blasting Vestager’s merger veto as an “economic error” that damaged Europe’s industrial interests. He called for a reform of the competition rules she enforces, that demand an independent analysis of deals. Such a back story may push the EU to show it can’t be influenced by politicians, making it likely the Alstom-Bombardier deal will get close attention.

Le Maire’s arguments in 2020 may be very similar to the ones he has made over the past two years, focusing on the need to build a European champion that can compete with China’s state-owned CRRC Corp., the world’s largest train manufacturer.

But Le Maire’s case might be stronger than before. In the intervening months, CRRC has offered to buy German diesel-locomotive manufacturer Vossloh AG -- a deal Germany may veto. Another company, China Railway Construction Corp., may potentially build the U.K.’s high-speed railway HS2, according to the Financial Times.

Aside from CRRC, the companies seem to be more willing to address any of Vestager’s concerns by selling off overlapping units or products.

Alstom Chief Executive Henri Poupart-Lafarge said in an interview on BFM Business TV that “Bombardier is much smaller, and there isn’t the same issue with signals” that haunted the Siemens deal.

This time round, the biggest overlap is in commuter trains known as electric multiple units, where the merged business would have a near 50% market share in Europe, and in the region’s urban-transport market, including trams and subway trains, according to Hamburg-based rail consultancy SCI Verkehr.

While Bombardier has its headquarters in Montreal, the deal would effectively be an all-European combination, with the company’s Bombardier Transportation division based in Berlin after being formed from the 2001 takeover of Daimler AG’s former ADtranz business.

Vestager has repeatedly said the Siemens-Alstom deal might have turned out differently if the companies had done more to resolve concerns about its high market shares for high-speed rail and signaling systems.

She even said Siemens was welcome to try the deal again on the day she blocked it.

Bombardier was keen to show it had been listening.

“It’s likely that there will be remedies associated with that, but we feel confident that Alstom will be able to obtain the antitrust approval,” Bellemare said.

--With assistance from Christopher Jasper, Geraldine Amiel and Vidya Root.

To contact the reporter on this story: Aoife White in Brussels at awhite62@bloomberg.net

To contact the editor responsible for this story: Anthony Aarons at aaarons@bloomberg.net