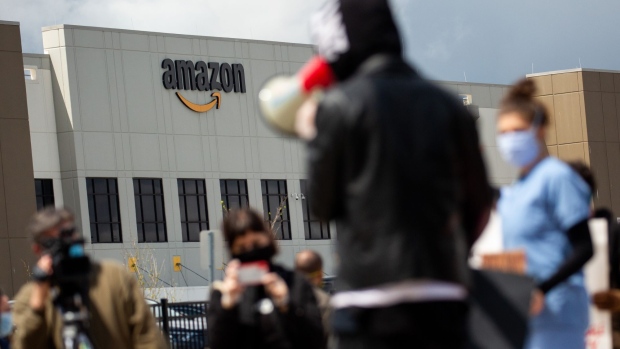 Chris Smalls, a fired Amazon fulfillment center employee, center, speaks during a protest outside an Amazon.com facility in the Staten Island borough of New York, U.S., on Friday, May 1, 2020. Workers at Amazon, Whole Foods, Instacart, Walmart, FedEx, Target, and Shipt said they would walk off the job to protest their employers' failure to provide basic protections for employees who are risking their lives at work. , Bloomberg

(Bloomberg) -- U.S. labor board prosecutors plan to formally accuse Amazon.com Inc. of illegally firing an activist who was trying to unionize its New York warehouses, unless the company first settles the case.

The fledgling Amazon Labor Union alleged in November that Amazon illegally fired one of its organizers, Daequan Smith. The National Labor Relations Board’s Brooklyn-based regional director found merit in those allegations and “will issue a complaint if the case does not settle,” agency spokesperson Kayla Blado said Friday. The complaint would allege an illegal retaliatory firing as well as other violations of the law, she said in an email.

The ALU, founded by current and former Amazon employees, has filed a petition to hold an election at four of the e-commerce giant’s facilities in Staten Island. A hearing on the request is scheduled for next month.

Derrick Palmer, the group’s vice president, said getting Smith reinstated could help galvanize support for the ALU. “It would be monumental for him to go back to the same building that he was terminated from and speak his truth and let workers know that it’s OK to speak out,” Palmer said.

Amazon has been grappling with an unprecedented wave of activism and organizing in North America, including walkouts over safety concerns in Staten Island and elsewhere, as well as unionization drives in Alabama, Canada and New York. Workers in Bessemer, Alabama, voted not to join the Retail Wholesale and Department Store Union last year, but the labor board ordered a do-over after the union accused Amazon of misconduct, which the company denied. The fresh mail-in election is scheduled to commence next month.

In December, Amazon reached a settlement with the labor board requiring the company to inform workers nationwide of their legal rights and to let employees organize on its property during their time off.

U.S. labor law prohibits companies from retaliating against workers for taking collective action to improve their working conditions, including union organizing. But the labor board, which is tasked with prosecuting alleged violations of that law, has no authority to make companies pay punitive damages, and disputes over alleged retaliatory firings can drag on for years, derailing organizing efforts even if the employee eventually prevails.

NLRB regional offices investigate claims and, if they find merit in them and can’t reach a settlement, issue complaints which are then considered by agency judges. The judges’ rulings can be appealed to NLRB members in Washington D.C. and from there into federal court.

The NLRB’s top prosecutor, general counsel Jennifer Abruzzo, has said she plans to “aggressively” seek federal court injunctions to get wrongly fired employees back to work more quickly. She is also pursuing additional remedies along with reinstatement and back pay, such as making companies compensate workers for health insurance costs they incurred because of their termination.

The ALU is urging the agency to take such steps in the case of Smith, who has recently been homeless. “The only way he’s going to get any justice is through an injunctive order,” the union’s attorney, Seth Goldstein, said Friday.