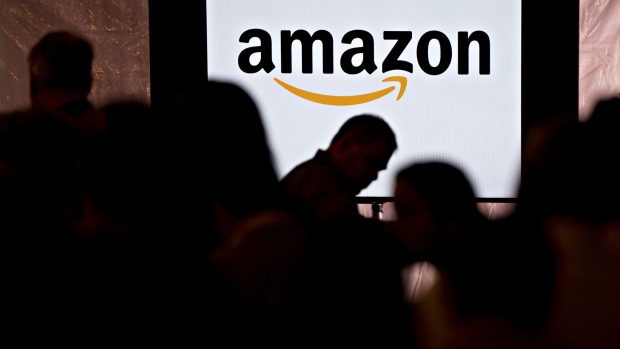 Signage is displayed on a monitor during an Amazon Career Day event in Arlington, Virginia, U.S., on Tuesday, Sept. 17, 2019. , Andrew Harrer/Bloomberg

Major technology and internet companies have long fueled the U.S. stock market’s climb to record levels, but that trend has come with one notable exception: Amazon.com Inc., which has languished in a fairly narrow trading range for months.

Amazon shares haven’t notched an all-time high since September 2018, in contrast to mega-cap peers like Apple, Microsoft, Alphabet and Facebook, which have been hitting records on a near-daily basis. Many of these names experienced pronounced draw-downs over the past year and a half, mostly due to disappointing earnings reports or outlooks. But they regained their momentum last year, as their growth assuaged investor caution. Amazon, however, remains about 8.5 per cent below its own peak.

Because of its long-term prospects, Amazon is about as close as a stock can be to a consensus choice among Wall Street firms. Over the near term, though, it is “the most hotly debated among investors” as “debates persist on both AWS and next day shipping efforts,” according to UBS analyst Eric Sheridan, referring to its Amazon Web Services cloud-computing business.

Since the start of 2019, Amazon shares are up about 24 per cent, below the 32 per cent rise of the S&P 500, as well as the much larger gains seen in other bellwethers. Microsoft and Facebook are both up more than 60 per cent since the start of last year, while Apple has doubled. The rally resulted in trillion-dollar valuations for Apple, Microsoft and Google-parent Alphabet, a milestone that Amazon briefly eclipsed in 2018.

The underperformance reflects concerns over Amazon’s earnings trends, even as it has continued to grow revenue at a double-digit clip. Major investments into initiatives like one-day shipping are seen as headwinds, and shares “may be range bound ‘tactically’” given the impact of this spending, Morgan Stanley wrote on Thursday. The firm added that “near-term profitability is likely to still disappoint” because of these investments, even as it sees the effect as temporary and one-day shipping deepening Amazon’s competitive moat within e-commerce.

Another key issue is the waning dominance of Amazon Web Services, which has long been a major driver for earnings and margins, but has faced growing competition from rivals like Alphabet and especially Microsoft. According to Bloomberg Intelligence, which cited IDC data, Amazon Web Services was 12 times larger than Microsoft’s cloud business in 2014. By 2018, the most recent year for which data is available, it was just four times larger.

James Bach, an analyst at Bloomberg Intelligence, wrote that Amazon was particularly facing “stiffer competition” with government contracts. “Microsoft’s extensive sales experience, installed base within U.S. agencies and broad range of edge-computing products all make a compelling offering,” he wrote. Microsoft is “uniquely positioned to claim market share as federal agencies upgrade and secure IT systems.”

In October, Microsoft beat out Amazon for a US$10 billion Pentagon cloud contract, a deal Amazon had been seen as the favorite to win. The company subsequently claimed it lost the contract because of political interference by President Donald Trump, and filed a lawsuit challenging its validity.

Amazon earlier this week named a new sales chief for AWS. Deutsche Bank wrote that the “magnitude of personnel changes” at AWS, along with rising competition, underscored the “increased risk of further deceleration” at the business.

Separately, Morgan Stanley this week wrote that a quarterly survey of chief investment officers suggested some cause for caution about AWS growth. “Quarterly survey results can be volatile, but AWS saw a notable [quarter-over-quarter] drop in net expected budget share gains” over the next three years, analyst Brian Nowak wrote. “It will be important to continue to monitor these metrics going forward as we think about AWS forward growth.”

Amazon is expected to report fourth-quarter results later this month. According to data compiled by Bloomberg, Wall Street is looking for revenue growth of nearly 19 per cent and expecting net income to fall by nearly a third. AWS revenue is seen growing more than 30 per cent on a year-over-year basis, according to a Bloomberg MODL estimate.

Wall Street remains almost unanimously positive on the stock. According to data compiled by Bloomberg, 53 firms recommend buying the stock, compared with the four with a hold rating. None advocate selling the shares.