Canadian cannabis producers — already enticed by the larger U.S. consumer market — see the incoming Biden administration bringing the nation that much closer to legalizing the substance. Against this backdrop comes the news that Aphria Inc., a Leamington, Ontario-based marijuana company, is acquiring Delaware incorporated Tilray Inc., creating a bigger player in a growing field. The merger announced overnight is likely to kindle even more dealmaking in and around the industry as larger consumer-products makers also eye the opportunity to sell pot-infused foods, beverages and skin-care items. It’s an industry on the verge of taking off and is just waiting for the signal.

The all-stock transaction rewards Tilray shareholders with a 23 per cent premium to Tuesday’s closing price and hands Aphria shareholders 62 per cent percent ownership of the combined entity, which will have its principal U.S. offices in New York and Seattle. While it will retain the Tilray name and trading ticker, the company is to be led by Aphria CEO Irwin Simon, who previously founded high-flying natural-foods maker Hain Celestial Group Inc. Tilray soared 20 per cent in early trading Wednesday, while Aphria rose 1.6 per cent.

The deal marks a turnaround for Aphria, which under previous leadership was tarnished by allegations that executives engaged in self-dealing transactions and other criticisms by short-sellers. Pot stocks broadly, at one point market darlings, also suffered a fall from grace amid a confluence of operational difficulties and growth-stunting U.S. regulations. The COVID-19 pandemic hasn’t helped, either.

Now, though, a Joe Biden presidency may portend policy changes that would allow the cannabis industry to better flourish in the U.S., even if the government stops short of legalizing pot at the federal level. That’s something industry analysts suspect is still a few years away. In November, four more states passed ballot measures to allow for recreational use, and even a medical marijuana proposal in the deeply red state of Mississippi drew overwhelming support. It was the latest sign that pot is increasingly becoming a bipartisan issue, with the Pew Research Center finding that more than half of Republicans now say it should be legalized. Two-thirds of the country is in favor — 91 per cent if you include Americans who support it only for medicinal purposes. 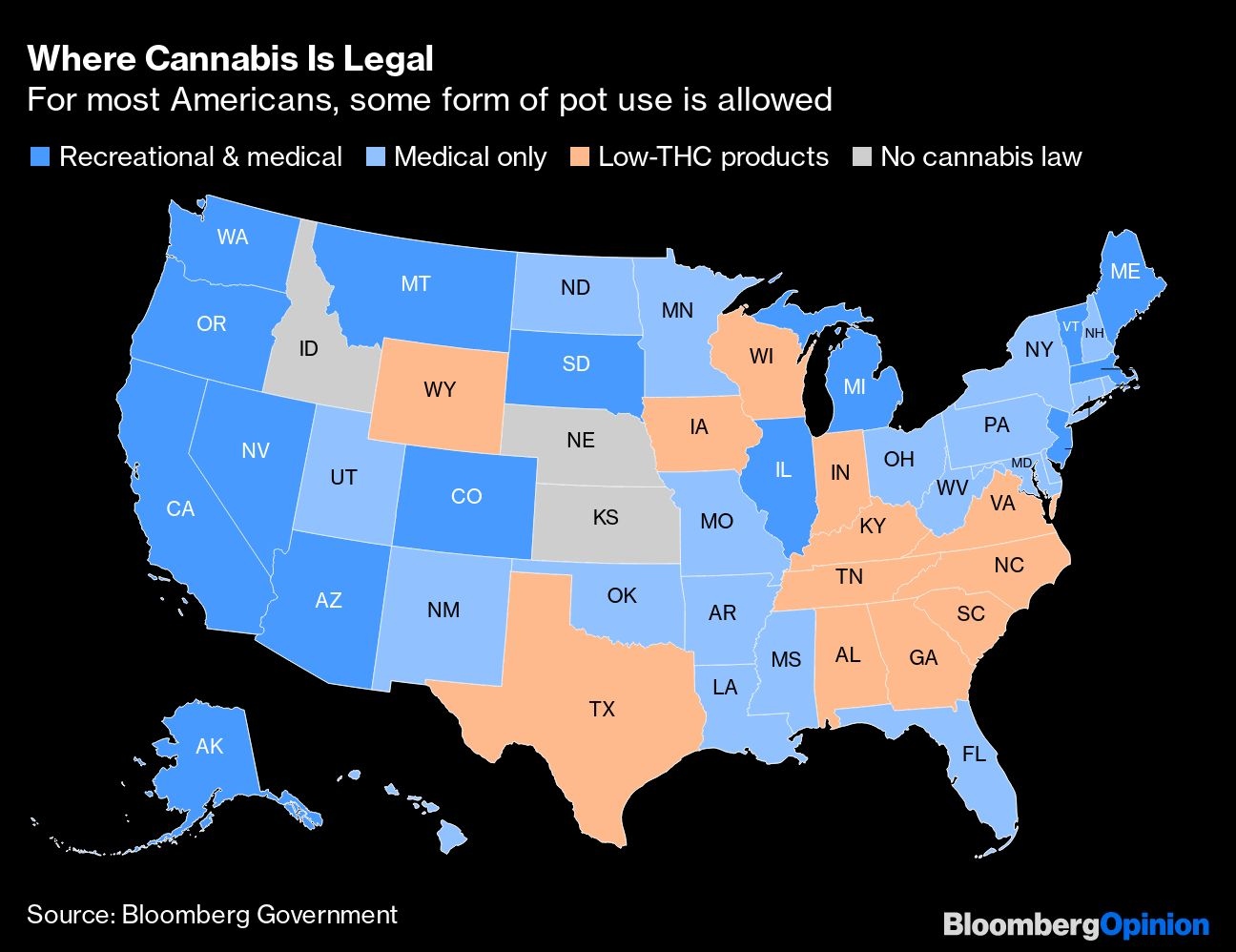 As the map above shows, the U.S. market is still very piecemeal and full of complexities. Producers have employed a strategy that entails moving into a state where medical marijuana is allowed, getting the licenses they need, and then sitting tight until the more lucrative recreational adult-use market opens up.

The industry has reason to be hopeful that under President-elect Biden, marijuana may be reclassified or removed from the Controlled Substances Act, as I wrote last month. Vice President-elect Kamala Harris pledged during the October debate to decriminalize marijuana. Currently, it’s a Schedule 1 drug, the same category as heroin and other narcotics considered to have the highest potential for abuse or dependence; cocaine, fentanyl, methamphetamine and oxycodone are all one level lower. Tinkering with the CSA to indirectly ease regulations may be more palatable to conservative lawmakers than outright federal legalization. The industry is also closely watching the Georgia election runoffs as it awaits a Senate vote on the Secure and Fair Enforcement Banking Act, which would allow financial institutions to legally do business with marijuana companies. Republican control of the Senate doesn’t necessarily mean it won’t pass, though.

As for Aphria and Tilray, they’re also betting their combination will give them an advantage in Europe and in consumer-packaged goods. Aphria has operations in Germany, while Tilray has a production facility in Portugal. And last month, Aphria  announced a deal with SweetWater Brewing Co., which it refers to as a “cannabis lifestyle branded craft brewer.”

Wednesday’s merger is a wager on the “cannabis lifestyle” becoming enmeshed in U.S. culture and industry — and not just the stereotype it conjures up. It’s probably only a matter of time before legal adult cannabis products become as commonplace on U.S. store shelves as beer, candy and cigarettes. Exactly how much time is up to lawmakers and the new White House.