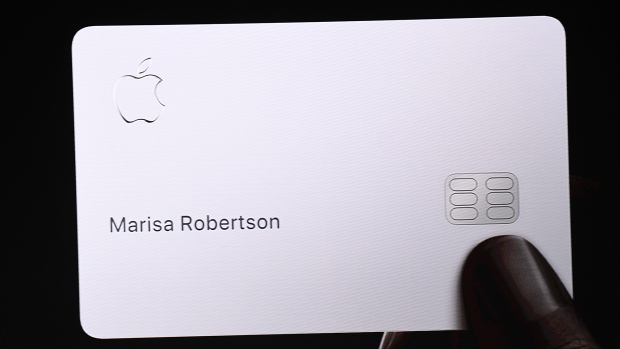 Apple Inc. (AAPL.O) is ramping up a test of a digital-first credit card with Goldman Sachs Group Inc. (GS.N) by expanding its use to tens of thousands of the iPhone maker’s U.S. retail employees.

The Cupertino, California-based company this week launched an internal beta program for the Apple Card with its retail workers, according to people familiar with the initiative. The move marks the first major trial for the card, which has been used for several weeks by a far smaller set of Apple corporate and Goldman employees. Apple has about 70,000 retail employees globally and more than half of its locations are in the U.S.

The test with employees provides Apple an opportunity to work out the kinks with the credit card before it hits the wallets of consumers. While Apple has thousands of retail employees, the internal group still provides a controlled testing environment. Apple has asked employees not to discuss the card, although they are allowed to use it publicly to make purchases.

The co-branded partnership integrates the card digitally with the iPhone and gives users higher cash back on Apple purchases and all transactions via Apple Pay. Goldman handles payment processing, credit obligations, disputes and customer services. Apple showed off a physical card with a sleek metal design when the company introduced it earlier this year.

Apple sees the card as another way to help keep customers attached to the company’s hardware and drive its expanding services revenue. For Goldman, the product provides the company with a consumer-focused offering tied to a popular company brand.

The credit card is scheduled to launch first in the U.S. in the next few months, but Apple has began discussing an expansion into Europe with financial regulators, a person familiar with the talks said.

Apple’s retail employees were notified of the expanded test via an internal message and can sign up directly from their personal devices, said the people, who asked not to be identified discussing internal company actions.

Many of the rank-and-file employees have already applied. The digital version via Apple Pay on the iPhone is usable immediately, while workers are told to expect the arrival of physical versions within two to three weeks. The employees are being offered the same APR range that Apple advertised to consumers: 13.24 per cent to 24.24 per cent, the people said.

Apple employees are testing the Apple Card in the Wallet app on iOS 12.4 and iOS 13. IOS 12.4 is expected to roll out this summer and include support for the Apple Card, while iOS 13, announced earlier this month, and is Apple’s next major iPhone operating system software update.

Screenshots of the employee beta of the Apple Card show that test versions of the card are fully functional and include the ability to receive daily cash back, pay bills, see an order status for a physical card and receive technical support via text messaging. Users can also schedule payments, access their credit limit and manage connected bank accounts, among other tasks. Users will also have the ability to set the Apple Card as the default payment method for Apple purchases.

Goldman has at least 30 people working on the product from its headquarters, while the Apple effort is managed by the company’s Apple Pay and Wallet app teams.