In the pandemic, the U.S. government has spent money on a scale not seen since World War II—without worrying too much about how it would pay the bills. That looked to some people like the triumph of Modern Monetary Theory.

A newish school of thought that wants to rehabilitate budget deficits—and get policymakers thinking more boldly about what they could achieve with public money—MMT burst out of obscurity a few years ago. It’s now regularly name-checked by top officials and big-name academics, though disapprovingly more often than not. Yet when those same people set out their own ideas about the economy, they often sound a bit more MMTish than they used to. Wall Street, meanwhile, has put out plenty of reports arguing that governments are practicing some form of MMT, for better or (usually) worse.

The MMT economists themselves dismiss much of this talk because it’s based on a caricature version that reduces their body of work to a simple prescription: Print lots of money and spend it. They say MMT is really a window on how the economy works, rather than a checklist of ways to rev it up. In some areas, they see policy shifting in their direction—and think they deserve credit. In others, they admit to making limited headway.

We asked some leading MMT theorists to review their progress in winning the world over. The examples below are all from the U.S., but similar debates are playing out elsewhere.

The U.S. federal budget shortfall came in at around 15 per cent of gross domestic product in the fiscal year ended Sept. 30—the most since 1945, by a wide margin. It’s unlikely to be much smaller this year. The headline measure of the national debt has accelerated past 100 per cent of GDP, another postwar record. 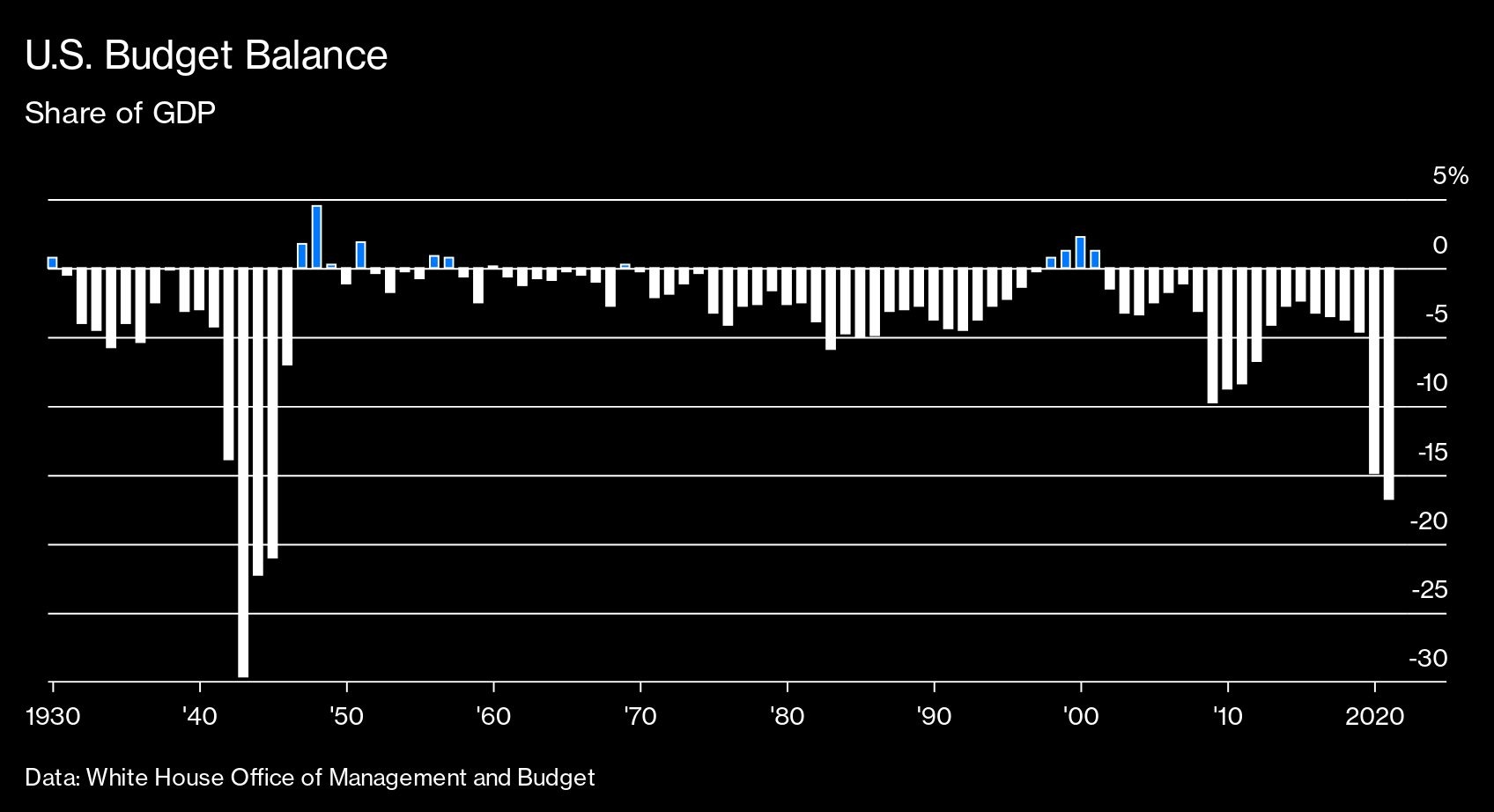 Fear of soaring deficits was a key reason the U.S. skimped on stimulus in the wake of the 2008 financial crisis. This time it’s proved less of a deterrent, and the economy is bouncing back much faster as a result. MMTers see that as an important win. “It’s appropriate for some credit to be given to those of us who have been working so hard to help lawmakers get over some of the anxieties about large deficits and increases in the debt that held them back during the Obama years,” says Stephanie Kelton, a professor of economics at Stony Brook University in New York and the author of The Deficit Myth.

Because countries such as the U.S. that issue their own money and have stable currencies don’t face the kind of bookkeeping constraints that hold back households or businesses, MMT argues, debt-to-GDP isn’t a particularly important metric: The real constraint on government spending is when there are shortages of essential resources, be it labor or lumber, that impede the economy. In such a scenario, there’s a risk that fiscal stimulus pushes up prices.

Some say that’s happening now. President Joe Biden’s spending plans didn’t stop with pandemic relief, and his administration is promoting a US$4 trillion investment in infrastructure and social programs. But with inflation running higher than anticipated, lawmakers are raising objections, a reminder that the deficit boogeyman is still alive.

Scott Fullwiler, an MMT economist and professor at the University of Missouri at Kansas City, says the COVID-19 crisis has shot down one common argument against deficit spending (used by Democrats to oppose former President Donald Trump’s tax cuts): that it risks leaving the government short of funds, so that “in the next crisis you might not be able to respond.”

Nevertheless, he expects mainstream economics will characterize the aggressive use of fiscal policy in the pandemic as a “special case”—indispensable in emergencies but inappropriate in normal times. “It’s sort of two steps forward, one step back,” Fullwiler says.

There was some evidence for that in Federal Reserve Chair Jerome Powell’s July 15 testimony to Congress. Although Powell endorsed deficit spending during the COVID crisis, he told lawmakers it’s not sustainable in the long run because “the laws of gravity have not been repealed.”

The U.S. has steered its economy in recent decades mainly via monetary policy: The Fed tweaks interest rates to cool or stimulate demand. MMT argues that fiscal policy is a better tool.

One objection is that adjusting spending or taxes is unwieldy compared with rapid-response decisions at the Fed. Congress can spend months arguing over spending plans, like it did after the initial virus relief in March 2020, and is usually unwilling to raise taxes.

MMT economists, along with others, say one way around this is to design mechanisms that inject or withdraw money automatically based on the state of the economy—without lawmakers having to take a vote. In academic jargon they’re called automatic stabilizers.

Fullwiler says Congress passed up an opportunity to permanently beef up programs such as unemployment insurance, relying instead on one-time payments or enhanced benefits that came with an arbitrary cutoff date. “We ended up having to keep going back to Republicans vs. Democrats, and we didn’t get anywhere at times, and that hurt a lot of people,” he says.

For MMT the ultimate stabilizer is for the government to act as employer of last resort, offering a job to anyone who wants one. Although the idea was in vogue among some leading Democrats a few years ago, it’s now largely disappeared from public debate. That’s a setback for MMTers, who say the policy could’ve proved its worth during the COVID recession, which saw unemployment surge to its highest level since the Great Depression.

“The jobs guarantee would make a lot more sense than ramping up jobless benefits and paying airlines US$300,000 per job,” or mailing checks to households that didn’t need the money, says Randall Wray, a senior scholar at the Levy Economics Institute in New York and co-author of the first MMT textbook. “Even if in the beginning you couldn’t put the people to work because of safety concerns, you at least would be targeting the spending” to people who were out of work.

MMT’s take on taxes is one of the most controversial aspects of the theory. It boils down to the notion that governments don’t need to raise revenue to pay for their spending, though MMT allows that taxes may be useful for other purposes such as cooling demand (and therefore inflation), redistributing income, or discouraging undesirable behaviors, like smoking and use of fossil fuels.

In the heat of the COVID crisis, it sometimes looked like U.S. policymakers had bought into this conception. “During the first round of stimulus, no one was talking about pay-fors because the thinking was that there was so much slack in the economy,” Wray says.

But that didn’t last long. The Biden administration is seeking to raise taxes on high-income households and corporations to pay for some of its policy priorities, including enhanced child benefits. “They’re not approaching this next round of spending the way any of us would approach it,” Kelton says. “They’re just matching dollar for dollar.”

With U.S. consumer prices surging at the fastest pace in more than a decade as the economy reopens, fear of inflation is already widespread. More government spending, as advocated by MMT, would just make things worse in the view of critics.

MMTers counter that multiple branches of government should be engaged in managing inflation, not just the Fed with its blunt instrument of interest rates. That includes Congress, which should draw up its plans for spending and taxes with an eye to price pressures rather than balancing the books, in MMT’s view. Kelton says there’s still a “gaping amount of daylight” between that approach to budgeting and how it’s done now.

A holistic anti-inflation strategy could include all kinds of other measures, too, from government interventions to ease supply bottlenecks—such as the lack of semiconductors that’s pushing up auto prices right now—to using regulation and other tools to promote competition in sectors where companies are deemed to have too much pricing power. The Biden administration has taken steps in this direction in recent months. “The solution to the supply chain problems is not to raise interest rates,” says Fullwiler. “The solution to inflation is going to depend on where the inflation is coming from.”

Even if much of the pandemic response has been in line with MMT thinking, and there’s less alarm about deficits and debt nowadays, Kelton says few have embraced the theory’s core claim: that “governments that issue their own currency never have to borrow it from anyone in order to spend. And if they choose to issue bonds, they can always choose the interest rate that they are willing to pay.”

She describes that intellectual leap as “the last mile to MMT” and says few economists and policymakers so far have been willing to take it. “They’re not there,” she says. “They will not go there.”