U.S. personal spending accelerated more than expected in June, reflecting a ramp up in outlays on services, while a closely watched inflation measure continued to climb.

Purchases of goods and services increased 1 per cent from a month earlier, following a downwardly revised 0.1 per cent drop in May, Commerce Department figures showed Friday. The personal consumption expenditures price gauge, which the Federal Reserve uses for its inflation target, rose 0.5 per cent for a second month. 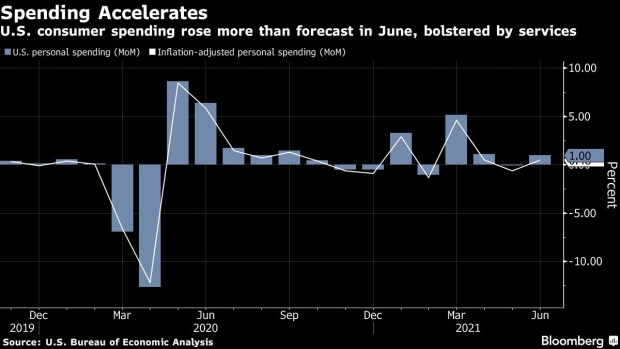 Thanks to vaccinations and a broader reopening of the economy, consumers had the confidence and ability to spend money on services like dining out as well as merchandise. With goods spending well above pre-pandemic levels, outlays have increasingly shifted to the pandemic-battered service sector.

The median estimate in a Bloomberg survey of economists called for a 0.7 per cent monthly increase in total spending.

The rapid snapback in demand has outpaced supply, with companies struggling to fill open positions and acquire the materials needed for production. Those constraints have pushed prices higher and corroded Americans’ buying power.

Still, with the labor market well short of a full recovery, Fed Chair Jerome Powell has said there is still some way to go before reducing monetary support for the economy.

Incomes rose 0.1 per cent in June following two straight declines. Meantime, wages and salaries climbed 0.8 per cent, reflecting both rising pay and an improvement in the labor market.

The saving rate fell to a pandemic-low of 9.4 per cent and nearing the 8.3 per cent seen in February 2020, before the health crisis. The figure shows income and spending patterns are normalizing as the service sector reopens and government aid wanes.

A separate report on employment costs Friday showed private-industry wages rose 3.5 per cent from the second quarter of last year, the largest increase since 2007.

The overall PCE price index advanced 4 per cent from June of last year. Adjusting for inflation, spending increased 0.5 per cent last month after falling in May.

Inflation-adjusted spending on services rose 0.8 per cent, the fourth straight advance, while real outlays for merchandise dropped 0.2 per cent in June.

The shift to services spending was evidenced in the latest earnings report from United Parcel Service Inc. UPS shares have retreated this week on concern the delivery boom may be cooling.

The core price index, which excludes food and energy, rose 0.4 per cent from a month earlier. The gauge jumped 3.5 per cent from June 2020, the largest annual gain since 1991.

“Inflation has increased notably and will likely remain elevated in coming months before moderating,” Powell said Wednesday. “As the reopening continues, bottlenecks, hiring difficulties, and other constraints could continue to limit how quickly supply can adjust, raising the possibility that inflation could turn out to be higher and more persistent than we expect.”

The figures come just a day after the government’s preliminary estimate of second-quarter gross domestic product. While GDP growth missed expectations, consumer spending jumped an annualized 11.8 per cent, one of the strongest paces in decades.