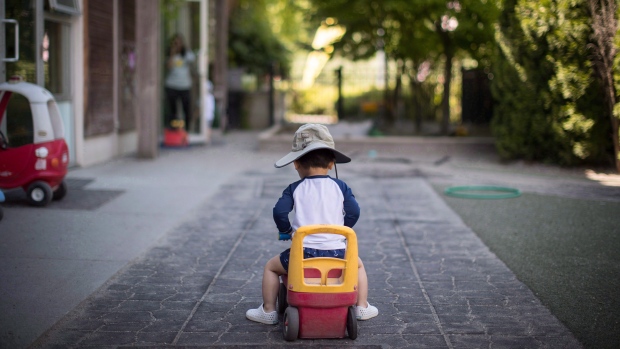 More than seven months pregnant, Alysha Savji faces a decision that many expectant parents must make in Canada.

The 35-year-old, who lives in Toronto and works as a hospital discharge coordinator, is considering how much time to take off of work after she gives birth to her second child in mid-April.

She’s entitled to extended parental benefits for up to 18 months, rather than the standard 12 months, an option introduced by the Trudeau government in December 2017. The 18-month leave means the government’s weekly allowance is adjusted for the extra time: It provides eligible parents with 33 per cent of average weekly earnings up to a maximum $337 per week, for up to 61 weeks. In contrast, the standard 12-month leave provides claimants with 55 per cent of their average weekly earnings, capped at $562 per week, for up to 35 weeks.

“I would love more time off with my children,” Savji said in a phone interview. “It’s the beginning of their life. I’ll never get this time back.”

More than 32,000 parents established a claim for extended benefits between December 2017 and December 2018 — higher than the anticipated 20,000 claims for the year, according to Employment and Social Development Canada. But it’s not an easy decision for parents like Savji, who says she’s grappling with a number of factors in her decision, including — of course — money and the cost of child care.

Child-care fees remain “out of reach for many parents” in most of Canada, according to the latest annual study by the Canadian Centre for Policy Alternatives (CCPA). In 2018, child-care fees rose faster than the rate of inflation in 17 of the 28 cities surveyed, according to CCPA.

That’s on top of all of the other costs associated with raising children.

“You can’t really make a decision about whether to take the shorter or longer parental leave if you don’t know your financial situation,” Siwiec said in a phone interview.

Income may include employment insurance or a company’s top-up program, he said, adding that it’s important to calculate that EI is taxed based on income.

“Expenses will also heavily change,” Siwiec said. “You’re going to have upfront expenses in preparing for the child. And then there’s ongoing expenses like diapers, increased food costs, possibly supplements for the mother and educational savings.”

In Savji’s case, even with her employer’s top-up, her income on parental leave will be a far cry from what she usually earns working full-time. And then there’s the additional cost of child care.

Savji said once she returns to work, child care for her baby and her first son, now 19 months old, will cost a total of about $3,100 a month.

“So, now is it worth it? Is it worth is to go back early after 12 months to pay this astronomical price? I don’t know.”

Many parents also have to weigh the impact that an 18-month leave may have on their career.

“You’re missing out on work experience, six months of networking, six months of keeping your skills up, and that hurts you a lot more financially than I think people realize,” Bridget Casey, personal finance expert and founder of the website Money After Graduation, said in a phone interview.

“That’s not to say that spending time at home with your child isn’t valuable. People should definitely stay home for 18 months if they want that experience of caring for their child for that long,” Casey said.

But, she adds, from a financial perspective, if you earn anything over $40,000 a year, taking a longer leave may cost you more in wages than it will save you in child-care fees.

Savji said she is “definitely” concerned about the potential career repercussions if she opts for a longer leave.

“I just got this job. I recently got a master’s [in nursing], so I’m trying to utilize that to propel my career forward,” she said.

WAYS TO SAVE ON CHILD CARE

Expectant parents may be able to take advantage of child-care subsidies. But the amounts vary depending on location, income, family size, employment status and other factors, according to CCPA.

“Even families that earn over $100,000 [a year] may still be eligible for some type of child-care subsidy. And households that earn around $30,000 to $40,000 typically qualify for a large subsidy,” Siwiec said.

“Apply when you know that you’re pregnant because there’s such a long waiting list,” he added.

Both Siwiec and Casey caution that not all child-care centres are eligible for subsidies.

“When you’re looking for child care, don’t just look at the cost that they post, look at what you would actually pay based on what resources are available to you,” Casey said.

Some parents may also be able to claim part of their child-care expenses when filing their taxes.

“A lot of these subsidies and deductions are there to support someone that’s going back to work, doing research and going back to school. So it’s important that a person makes sure they qualify,” Siwiec said.

February is Your Money Month at BNN Bloomberg. For more stories and practical advice on how to employ your money wisely, visit our Personal Finance page.